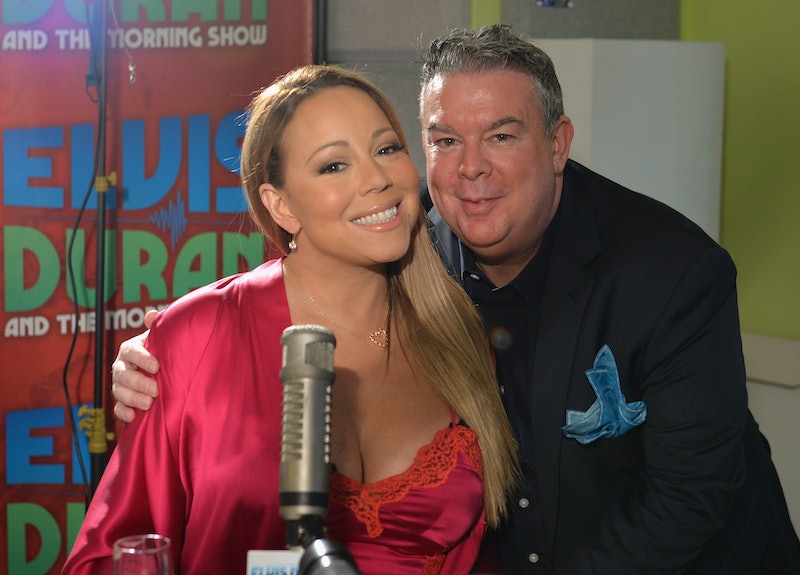 It seems that Mariah Carey has given up any inkling she may have had to give her next album a Beyoncé-like release. Of course, we kind of got the memo from the interview she gave announcing the so-called secret, but it's still nice to have it confirmed. Mariah Carey probably wouldn't have gotten the same album sales as Beyoncé using the same release method and the hype surrounding her upcoming album has been muted at best. Conventional was definitely the way to go here. But now that Carey has finally announced that her new album will be called "Me. I Am Mariah...The Elusive Chanteuse" and set her release date for late May, is conventional going to be enough?

The announcement was accompanied by a video by Mariah Carey, explain the cover art and title. Carey said in the original Billboard interview that the album took its title from "personal possession of mine that's part of an entity that I've had almost all my life". That personal possession turns out to be a self-portrait that she drew when she was 3 years old, titled "Me. I am Mariah".

"Please don’t judge me for such a simplistic title. Come on, I was only three and a half," Carey jokes, before going on to explain that the second half of the title came from one of the many nicknames she's picked up over the years. "Lately, they've been calling me the Elusive Chanteuse. I like it."

Surprisingly, or perhaps unsurprisingly, Carey's album only includes three of the four singles she has released. "#Beautiful (featuring Miguel)" and "You're Mine (Eternal)" made the list while "The Art of Letting Go" can only be found on the Deluxe edition and "Triumphant (Get 'Em)" doesn't make the track list at all. The album will be released on May 27, which only gives Carey half a month to build her buzz.

The thing is that after the three years that have elapsed since we first learned that Carey was working on a 14th album, the underwhelming singles that she has released (#Beautiful aside, of course), and the confusion about everything from the title to when and how we're actually going to get our hands on the album, Carey will probably need more than half of a month to get people interested in her project again. Her songs haven't been charting the way that they used to and the most interesting news about her recently has been Nick Cannon openly discussing their sex life and Carey's diva behavior in interviews.

Carey is insanely talented, that's an undeniable fact, but it's jumping the gun to think that "Me. I Am Mariah...The Elusive Chanteuse" can sail by on her star power alone. A comeback tour or at least releasing one more single would have gone a long way toward making sure she's at the forefront of the people's minds again. Her album has been putting the elusive in "The Elusive Chanteuse" for so long that people have just stopped wondering and that doesn't bode well for Carey's sales. Then again, she is Mariah Carey. Maybe she knows what she's doing.

The complete tracklist for "Me. I Am Mariah...The Elusive Chanteuse" can be seen below.