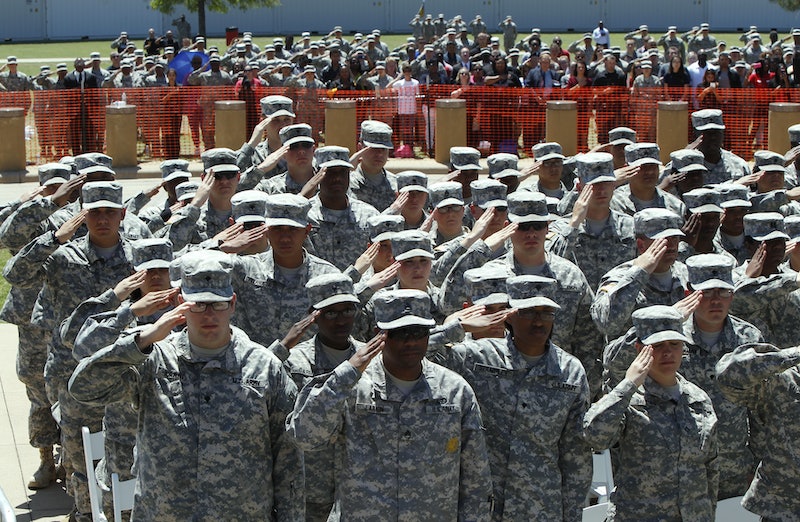 The Pentagon announced promising news Thursday, revealing that reports of military sexual assault have risen 50 percent on the heels of the Pentagon's campaign to encourage victims to come forward. While it's good news that more service members are speaking up about the issue, which has been described as an 'epidemic,' more still needs to be done — the number of male victims reporting sexual assault remains very low. Only 14 percent of the cases filed last year involved male victims.

Shockingly, nearly one in three women is raped during her time in service, according to a recent veteran lawsuit, but for males this figure may be even higher. An anonymous 2012 Department of Defense survey of active-duty service members indicates nearly 14,000 men said they experienced unwanted sexual contact last year, compared with 12,000 women.

There were about 5,000 reports of sexual assault in the military in 2013, compared to the 3,374 cases the Pentagon's Sexual Assault Prevention and Response office detailed for the 2012 fiscal year. More people are feeling comfortable coming forward, officials say, largely due in part to improvements in the system such as the increase in prevention resources as well as treatment programs. Prosecutions also have increased, with action taken against 73 percent of those accused.

Incidents of sexual assault often go underreported — but when it comes to men, statistics are even more disheartening. Pentagon officials know this, which is why they're looking to hone in on the military's male population and even review alcohol sales and policies.

It's a struggle for victims to report their experiences, and data shows it's especially tough on men, who can be discouraged by the ramifications of gender stereotypes — such as perceptions of weakness and questions over their sexual orientation. A 2012 Pentagon report says 53 percent of sexual assault cases involved attacks on men, mostly by other men.

"There is still a misperception that this is a women's issue and women's crime," Nate Galbreath, senior executive adviser for the Pentagon's sexual assault prevention office, told the AP. "It's disheartening that we have such a differential between the genders and how they are choosing to report."

Of course, this isn't to downplay the gravity of incidents also faced by females, and it's important to note there are more men than women in military ranks. Still, the government still faces an uphill battle in encouraging male service members to speak up.

Critics have blamed military culture, but as the Obama administration pays more attention to the issue of sexual assault nationwide, particularly on college campuses, we could use more campaigns working toward the social de-stigmatization of male victims.