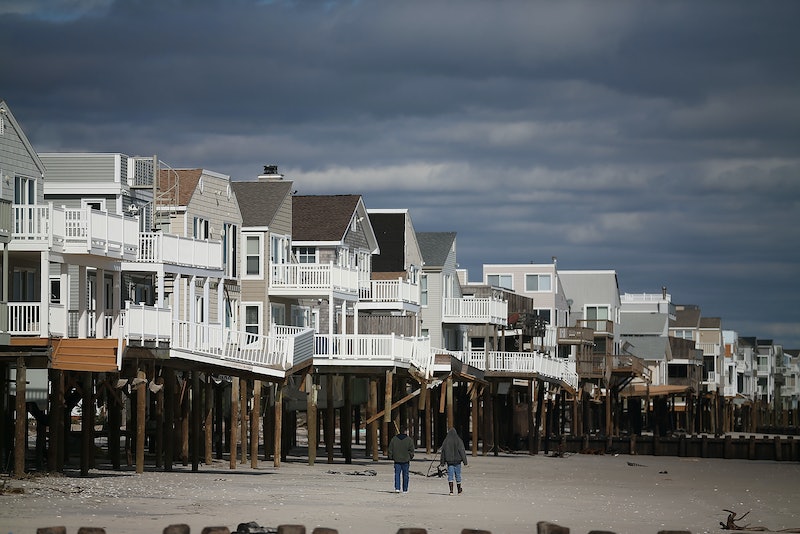 When the traffic lights turn on in Long Beach Island, you know you've hit the most magical time of the year. Of course, that also indicates the time of the year you'll have to sit in bumper-to-bumper traffic, but it's worth it. Because as soon as those lights turn on, it's clear: Summer, too, is on. And, really, there's no better place to enjoy three months celebrating the sun than Beach Haven. Or Ship Bottom. Or Harvey Cedars. Or North Beach. Or Surf City. Or Brant Beach. Or really anywhere on the Jersey Shore's most magnificent colony, LBI. (Except, of course, Loveladies, because, who am I, the queen?)

But, if you vacation in Long Beach Island, here's guessing you'll also understand that...

You don't refer to your vacation home by town, but by exit number.

And you know that you lose SoJO 104.9 for a minute every time you turn off the Parkway onto Barnegat Road.

And their questionable fashion choices.

We can all get along, right? Who does like having sand stuck to their feet all day anyway?

But, shoobie or not, who can resist the draw of LBI's bagels?

Bageleddi's, Bagels & Beyond... take your pick, they're all better than any bagel from any other zip code.

There's nothing more beautiful than the sound of the ocean...

Nothing complements a tan more.

...until it's combined with a screaming family of five and a boombox.

But definitely nothing complements a tan quite like Kool-Aid stains. Thanks kid!

But that's okay, because you'll lose your hearing at The Shell anyway.

WHAT? I STINK? HOW DARE YOU — OH, HOW'S MY DRINK? OH. IT'S GOOD, BUT I'M SO SWEATY SURROUNDED BY ALL THESE PEOPLE THAT I'M STARTING TO STINK.

Even though the best hangout on the island is the sandbar.

In August, you'll have to watch your step for jellyfish.

Because Friends taught you what will happen if you step on one.

And, year-round, you'll have to watch your step for WWI-era artillery.

Giving a new meaning to "sweating bullets" on the beach.

You always feel bad for the beach badge checkers...

Enforcing the rules no one cares about — they're the beach's version of HR.

...but that won't stop you from getting up and running into the water to evade them when you forget your badges.

What? Like we should have to go all the way back up the sand dunes to go get them? You monster.

You will ardently defend LBI against anyone who sniffs at the Jersey Shore.

Mostly by claiming Jon Bon Jovi has a home in Loveladies (or so the rumor goes).

And, yes, okay, Teresa Giudice has a house near LBI too.

But we'd really all prefer not to talk about that.

There are only two things every resident knows to be true: Pattie Romano always looks better with whiskers.

And you didn't know how much you'd miss the shack until it was gone.

By existing as long as it did, it taught us all a lesson in perseverance. RIP.

This is what the ocean breeze feels like on a hot day.

And this is what it feels like when the wind turns west on a hot day.

You have a Pavlovian Response when you hear the bell ring at the top of the beach.

Leaving the beach is hard... physically.

Between the beach chairs, the umbrellas, the coolers, the toys, and the never-ending climb up the sand dune? And you thought the Grinch's dog had it tough.

But it's worth it when you think about Mud City in your future.

Which you'll never have because you'll give up after a two-hour wait at the restaurant.

But, really, your stomach will thank you because...

You can envision the Chegg in your future.

But you won't eat there either because you'll give up after a two-hour wait at the restaurant.

But, really, your stomach will thank you, because, well, buffalo wings.

But settling for dinner at Rita's isn't really settling, is it?

Speaking of ice cream, you have been forced to wear a funny hat at Showplace, and it did embarrass you.

No. Not a chance. Not doing it. Wait, you'll put how much whipped cream on that hot fudge sundae? Hand me the bowler.

But not as much as your day trip to Karma.

You just had to see it.

You know that Fantasy Island is a breeding ground for young gamblers.

If I pay another $20, I'll get enough tokens to finally win that strawberry-scented eraser!

Which is precisely why you throw away at least $50 every time you're in Atlantic City.

Just one more — I've got to play this Back to the Future slot. Where we're going, we don't need full bank accounts.

Oh yes, Air Supply will be at Harrah's this summer, why do you ask?

Which makes you realize the most entertaining part of AC is simply watching the The Water Show at the Pier Shops at Caesars.

It's like the Bellagio Fountain, only smaller and closer to the GAP.

So why wouldn't you go back to LBI and enjoy the surprisingly legitimate talent at the Surflight?

Like world-class guitarist Tommy Emmanuel. ( ...and a Gilligan's Island alum or two.)

But you do think of Joe Pop's.

You know that Joey's always floods.

And, because of that, you know you can always go there for "occasional waterfront dining."

You will forever be forced to argue the eternal question: Sand Trap or Hartland?

When will we realize there's no right answer? (Especially since you have free coupons for both?)

You've walked much further than you ever should have on the Barnegat Lighthouse rocks.

And, thus, you've sprained much more than you ever should have on the Barnegat Lighthouse rocks.

You've met some of your best friends since childhood on LBI.

And regularly rode the Giant Wheel with them.

But the Nardi's Party Bus is really your best friend.

Ah, the Nardi's Party Bus, keeping us safe and drunk for years.

Actually, the Oreo Crunch at Country Kettle Fudge is.

But your beach vacation isn't all about indulgence. In fact, you've run the Dog Day race in August...

...and were beaten by old men and children, so what?

Okay, so it really is all about indulgence. But you wouldn't blame us if you went to Chowderfest.

Or had a donut at Ferrara's.

The best jelly donuts on the planet, people.

You've definitely purchased something stupid from the Dollar Parlor.

And you definitely fell for the spider-on-a-string prank every single time you went.

How can you not? The man's as much a Jersey Shore institution as boardwalks and Buckalew's.

And you've definitely thought about purchasing a surfboard from Faria's before chickening out.

You also know the real story behind Ron Jon.

And now you do too.

But you still haven't figured out Dr. Racanelli's.

Even though he's as familiar a beach sight as ill-fitting swimsuits and questionable tattoos.

You know that we all went through a pretty shitty time in October 2012.

And, because of Hurricane Sandy, you know so much more about elevation levels than you ever thought you would.

But you know that that will never stop you from enjoying our summers.

And if you never hear "Stronger Than the Storm" again in your life, it will still be too soon.

We'd rather sit in three hours of bridge traffic, Christie.

But you'll put up with it, because there's no better place to watch a sunset, ride a wave, build a sandcastle, gobble up an ice cream cone, make lasting relationships, and to truly live than Long Beach Island.

More like this
These Are The 3 Most Mellow Zodiac Signs
By Kristine Fellizar
Here’s Your Daily Horoscope for December 7, 2022
By Mecca Woods
13 Gifts From Latina-Owned Businesses For Everyone On Your List
By Marilyn La Jeunesse
69 Great Gifts For Guys No Matter What Their Hobbies Are
By Teresa Newsome, Mia Mercado and Brittany Leitner
Get Even More From Bustle — Sign Up For The Newsletter