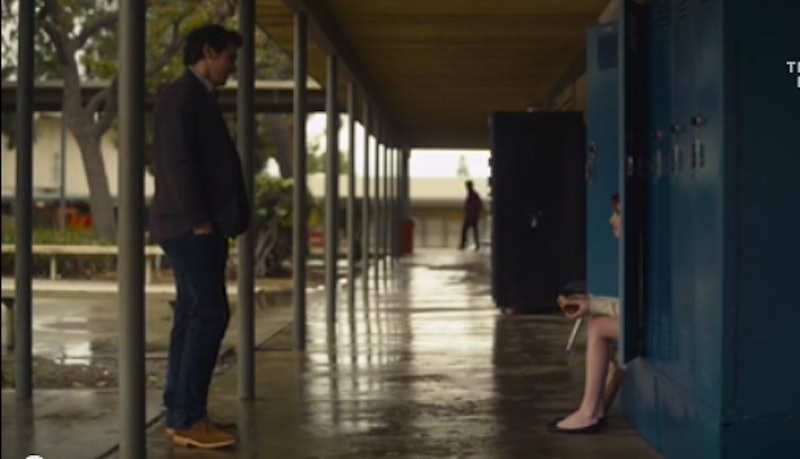 It's what you've been waiting for — another clip of James Franco and Emma Roberts in Palo Alto . We've already been uncomfortable with their May-December romance considering the movie's ill-timed release with his recent Instagram scandal, but now it's time to let the uncomfortable feeling in your stomach come to full realization. This clip shows Franco's character making some advances on Roberts' character, which is awkward for all of us 'cause we know how it's going to end.

You already saw the clip of the two of them kissing, but this clip is the scene leading up the event, making you shout at your scream, "NOOO EMMA ROBERTS! DO NOT!" But here we see Franco approach Roberts as he she sits inside of her locker (apparently as teens do) as he offers to "babysit" (cringe) and help her with her homework which is code for "hit on you."

So here is the scene that will allow you to Tweet your latest Franco joke that you've been pontificating for the past month! After all, it's been a whopping four weeks since that whole debacle happened in which Franco made inappropriate advances towards a minor. But you know what they say: life imitates art, especially when you're James Franco and are well-versed in the art of philosophizing over everything.

The movie, which is based on Franco's collection of short stories about a set of California teens, hits select indie theaters on May 9, but for now, you can watch the clip below:

And ICYMI, that kissing scene, too:

Yup. Still a little creepy. But I'm still totally going to see the movie because I'm just too damn curious not to.