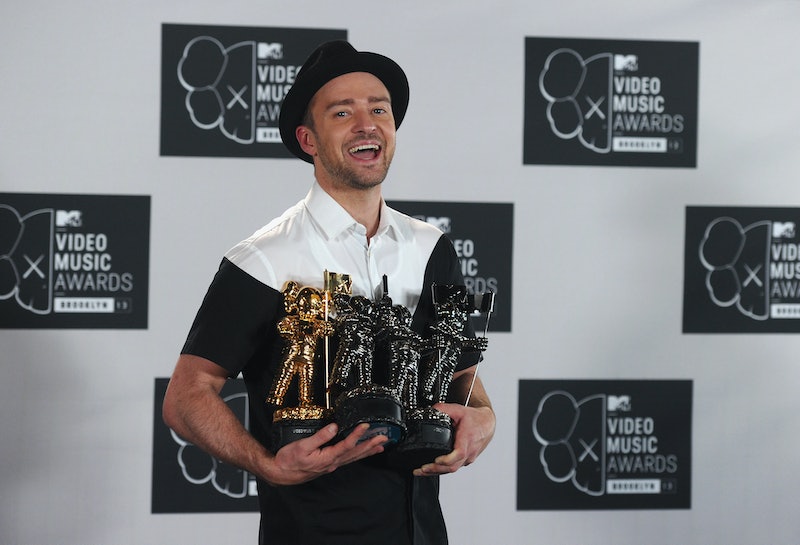 Who is going to appear on Michael Jackson's posthumous album? That's the question that has been plaguing just about everyone since those two conflicting reports hit the Internet on Wednesday and Thursday. Surely, many celebrities would like the honor, but there are only eight tracks on the album and only 11 days left to get to the bottom of this. When Justin Timberlake hinted his involvement on Instagram on Thursday, it just seemed like the latest in a long line of teases, even if that cover art did look very official and Page Six did corroborate the story. As it turns out, the "Love Never Felt So Good" duet by Michael Jackson and Justin Timberlake is real — and really good.

No one was expecting any less from the late King of Pop, but it was Timberlake who was the real surprise. After all, it's really difficult for me to remember that many years have passed since Timberlake's 'NSYNC days when that Justin Timberlake It's Gonna Be May meme is still alive and well. The man who sang "Dirrrrty pop" to me when I was eleven has always seemed to be in a different class than the man behind the Thriller video.

In fact, considering the song got its debut with Usher at the iHeartRadio Music Awards with the world's most epic dance routine, it was almost disappointing to see Timberlake's name on the single after all. Just imagine what that Usher music video might have looked like.

Not only does Timberlake compliment Jackson's voice perfectly, but their personal styles blend together until it's almost impossible to tell how much of the duet came solely from Jackson and how much of the duet was Timberlake's personal touch. As a first single, it's a perfect single because it shows off everything that the producers promised the album would be about. It's Michael Jackson's signature songs "contemporized" for the modern generation.

Whether you're just a fan of Jackson, just a fan of Timberlake, or a huge fan of both, there's something for everyone in this song. If the rest of the songs on the album are anywhere near as good as anyone, the late MJ is going to have another huge hit album on his extensive resume.

More like this
Twitter Has *A Lot* To Say About Justin Timberlake’s Beat Ya Feet Dance
By Sam Ramsden
Olivia Rodrigo’s Song Dedication To 5 SCOTUS Justices Sent A Strong Message
By Grace Wehniainen
Will Beyoncé Be At The BET Awards To Perform “Break My Soul” Or Attend The Show?
By Jake Viswanath
Lily Allen Was “Quite Emosh” After Performing Sober At Glastonbury Festival
By Stephanie Topacio Long
Get Even More From Bustle — Sign Up For The Newsletter