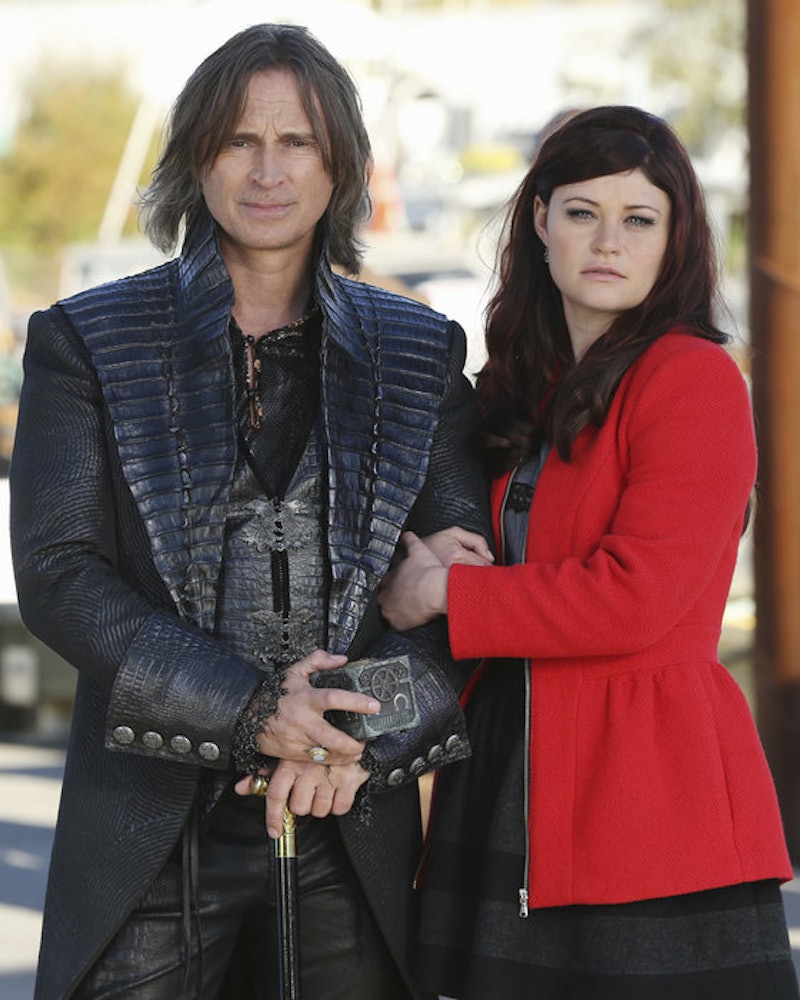 It's been awhile since we've seen a good, old romantic Rumpelstiltskin and Belle moment on Once Upon A Time . But with the Wicked Witch's reign of terror coming to an end, we're all about looking forward to the future. And definitely towards a future calls for a Rumbelle 'ship reunion. Whether you agree with this OUAT 'ship or not (I tend to throw all of my effort into Hook and Emma's impending relationship), it's clear that they are each other's soulmates. And, sure they're no Prince Charming and Snow White, but the way they refuse to give up on one another, regardless of the circumstances, is kind of inspiring.

The history of Rumbelle runs along the same lines as one of everyone's classic fairytales, Beauty and the Beast. Belle ends up in Rumpel's castle as a servant as the result of one of his infamous trades for helping her father, Sir Maurice win a war. Eventually, after being miserable about her captivity for awhile, Belle and Rumpel begin to get to know one another and strike up a friendship that eventually becomes romantic. Well, on Belle's end it becomes romantic — it takes her getting kidnapped by Regina for Rumpel to realize that her feelings were true and that he felt the same.

Now, I know what you're thinking — how is it fair to Belle that she has to try to figure out how to get Rumpel back to the person he was before? It's really not, but we do crazy things for the people that we love. And for Belle, the person she loves more than anything else and who she fought to bring back to life is Rumpelstiltskin. So, who are we to tell someone, even a fairytale character, that they shouldn't love the person they love because they have to work too hard on their relationship? Rumpel is Belle's Beast — and if OUAT has taught us anything, you don't 'ship against anything that's set in fairytale stone.

Here's why the Rumbelle reunion needs to happen sooner rather than later:

Rumpel, as The Dark One, was a mess before Belle started to break down his walls. And when he lost her to Regina and the curse, he reverted back to his terrible self. It's only with Belle that he can let his guard down and be an actual decent person — that's something serious. And, before you going saying that Rumpel gives nothing to Belle in return — he constantly empowers her and treats her as an equal. She's become quite the badass in their relationship.

And They Refuse To Give Up

He's been evil, she's lost her memories (twice), and yet they never give up on this relationship. Ever.

That something is true love, people.

She Makes Him See Reason

And that's no small feat, considering Rumpel sought out the power of The Dark One so that he'd never have to be at the mercy of another person again. He's not a character who deals with reason and the suggestions of others — it's his way or the highway. Except for with Belle.

He Realizes That He's Lucky To Have Her

Rumpelstiltskin, in all of his evil, actually acknowledges that love is something to be cherished. And he knows that he's not an easy man to love, so he holds Belle's affection and devotion in high regard.