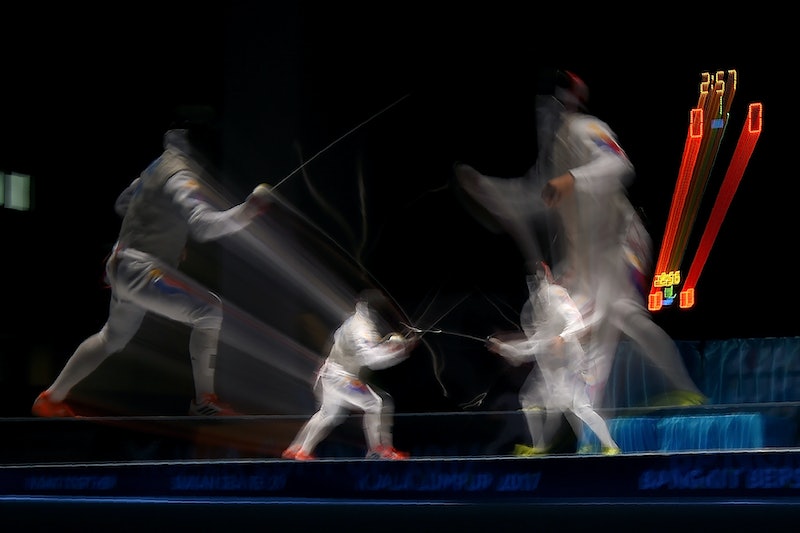 You know how in the movies, the hero of any action flick invariably ends up facing off against a gigantic hoard of minions? You know how each enemy patiently waits to attack said hero one by one, ultimately allowing him or her to best them all singlehandedly without even breaking a sweat? Have you ever wondered what would happen if that scenario played out in real life? I know I have — and now we can see this movie scene come to life thanks to this bizarrely mesmerizing video of three Olympic fencing masters battling 50 untrained opponents.

The video was first uploaded to YouTube in December of 2012, but it resurfaced on Digg the other day, allowing a whole new generation of Internet addicts to take in its glory. According to The Daily Dot, this stunt was filmed for a Japanese game show in 2012. The show asked three of the country's Olympic fencers — Kenta Chida, Ryo Miyake, and Suguru Awaji, who all won the silver medal in the team foil event at the 2012 Summer Games — to face down 50 amateur opponents. The rules of the game? Everyone had a balloon strapped to their chest (red for the Olympians, green for the amateurs); if the balloon popped, down you go. For the curious, looking at standard foil fencing here, which means your target is limited to your torso, you can only poke with your blade (no slicing and dicing), and your weapon has a tiny little hand guard. How did they do? Astonishingly well — but alas, this isn’t the movies:

So close! The first Olympian went down at about the 3:40 mark; the second lasted until the five-minute mark; and the third? Oh, the third! Although he had a mere two opponents left, his balloon burst at the 6:22 mark. Sadness! But they definitely made a valiant effort, so props to them for besting 48 out of 50. A 96 percent success rate ain’t too shabby.

Also, am I the only one who thinks American reality television should start taking their cues from videos like this? It’s way more fun to watch something like this than it is to listen to the Real Housewives whine about their latest legal issues.