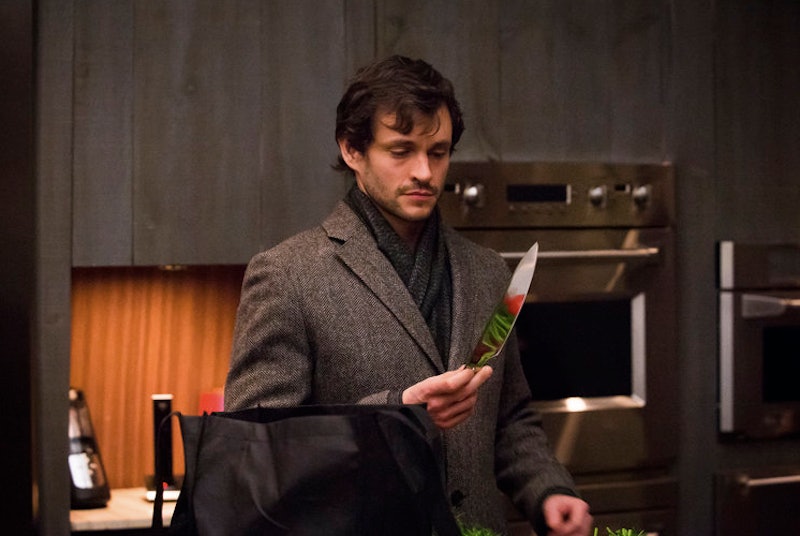 Guys, I'm starting to get really worried. In last week's episode of Hannibal, Will was attacked by Hannibal's old patient Randall Tier, a man who killed people by mauling them with an engineered hydraulic Cave Bear skull and claws. In turn, it looks as though Will murdered Randall, and quite brutally if we're to judge by next week's promos. At first, it seemed as though Hannibal sent Randall after his former friend and current patient as payback for Will trying to kill Hannibal earlier in the season. But there's more here than just petty revenge. I believe Hannibal is attempting to turn Will and many of his other patients into serial killers themselves.

Now I don't think that Hannibal wants to start some kind of serial killer cult a la The Following. But I do believe that Hannibal wants there to be more killers in this world. It's obvious that he helped Randal evolve into a weird, animal killer, but he is also trying to convince new patient Margot Verger to try and kill her brother again after the sexual and physical abuse he put her through. It seems Hannibal is trying to tap into people's dark sides and let them roam free. So why would Hannibal want this for Will? And is Will likely to succumb to this dark seduction?

1. Will Is A Changed Man Since His Arrest & Trial

Since his arrest and subsequent stay at the Dr. Chilton's mental institution, Will has become more hardened and darker than ever before. I mean, he asked creepy attendee Matthew Brown to murder Hannibal and almost succeeded. While Will has never been in the right mind throughout our history with him on this show, this was a dark low even for him. Perhaps Hannibal can see this better than anyone else thanks to his own dark heart and is trying to manipulate Will. It seems to be a lot easier than ever before.

Bryan Fully tweeted this photo Friday. While I'm not sure if this is a dream or reality — on this show either one is possible — perhaps Hannibal is looking to fill a lonely void inside of him. As we all know, he and Alana are now intimate physically. But Alana will never understand Hannibal emotionally. Perhaps by having Will feel more of a desire to murder, Hannibal feels that Will can fill that emotional hole. Or perhaps Bryan Fuller is just tempting the Tumblr fandom.

3. Hannibal Is Doing This As Security

Even though Will explained to Hannibal that he no longer wants to kill him, there has to be a side to Hannibal that doesn't believe this to be true. At the very least he must know Will still wants to prove Hannibal is the Chesapeake Ripper. Maybe by turning Will closer to his side by holding something like murder over his head, Hannibal can ensure — for now — that his killer secret is safe.

4. Hannibal Just Wants To Help Will

It's entirely possible that even after murder threats and attempts, Hannibal really does just want to be Will's friend. Maybe in his own twisted mind, Hannibal believe Will and some of his other patients are not living up to their full potential. Maybe Hannibal is the only person who sees that this new, darker side of Will that is coming out is actually his real personality. The old, nervous, scared profiler we met originally is his alter ego. Will has been hiding his true self all along and maybe now, he's finally ready to unleash it.