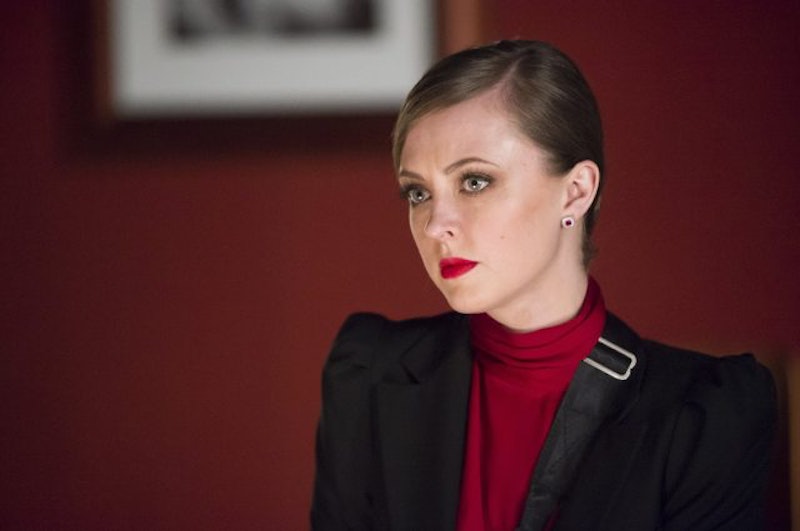 Just when you thought NBC's Hannibal couldn't get any more twisted than a dead horse giving birth to a human corpse, it ups the ante. Last week's episode, which contained that disturbing visual, also introduced Hannibal viewers to a new character: Margot Verger (Katharine Isabelle), who, along with her yet-to-be-seen brother Mason (Michael Pitt), has perhaps the single most twisted story in all of the Hannibal oeuvre. And that's saying something when you're discussing a show about a cannibalistic serial killer investigating other equally sadistic serial killers.

Margot is portrayed by 32-year-old Canadian actress Katharine Isabelle. Isabelle is no stranger to the horror genre: she's the daughter of Graeme Murray, who won two Emmys for his special effects work on The X-Files. And before Hannibal, Isabelle's most widely recognized work was the title role in Ginger Snaps , the Canadian horror trilogy where she played a villainous teenage werewolf. With her china doll features, her stoic presence, and her blood red lipstick that perfectly matched Hannibal's wallpaper, Isabelle made quite the impression in her few short scenes last week. Viewers were intrigued, but the question remains: who is Margot Verger?

Those who haven't read Thomas Harris' novels were likely mystified. Even those who have seen the film Hannibal would be at a loss, since her character was sadly excised (although her brother Mason remained, played by Gary Oldman). Her WTF-worthy introduction on the show was a hallucinatory montage of fish, tears, and martinis. Just in case that bizarre barrage of images didn't make any sense to you, let's mine Harris' books for clues.

SPOILERS to follow, obviously. Avert your eyes if you don't want to know.

Mason Verger is the main antagonist of Hannibal , the third book in Thomas Harris' trilogy. He is seeking revenge against the good doctor for something that happened between them years ago. While the event itself occurs far before the timeline of any of the books, we're going to be fortunate enough to witness it first-hand on the show. Here's what went down on paper:

Mason was a sadistic pedophile who grew up molesting children, including his own sister, Margot. He particularly got off on drinking martinis infused with the tears of the children he had abused. (This is what we were seeing in Margot's trippy intro.) All in all, not a very nice guy. He also has a thing for aquariums, hence the fish.

In the book, Margot is a lesbian bodybuilder. Clearly Isabelle is no weightlifting champion, and her sexual orientation wasn't discussed last week, so it remains to be seen how much of this characterization will translate to the TV show. Despite the repeated abuse she endured at the hands of her brother, she could never quite separate herself from him, because she desperately wanted his semen to implant in her lover in order to have a biological child. To deal with her complicated (to say the least) relationship with Mason, she started attending therapy sessions with Hannibal.

Now here's where things get really nasty. Hannibal, enraged by Margot's description of her brother, confronts him. (You know you're in trouble when a cannibal thinks you're disgusting.) Hannibal seduces Mason, encourages him to partake in autoerotic asphyxiation in front of him, and then offers him a popper laced with methamphetamines. High on the drugs, Mason is coerced by Hannibal into cutting off his own face with a shard of mirror and then feeds it to his dogs. As the disfigured villain says later, "It seemed like a good idea at the time." After Mason is done carving off his own flesh, Hannibal breaks his neck with the noose.

Doctors are miraculously able to save Mason's life, although they are unable to reattach his face, so he has to live the rest of his life inside a hypobaric chamber to prevent his exposed tissue from becoming infected. Margot continues to work under his employ, since Mason constantly holds the promise of his semen over her.

Mason plans an elaborate revenge plot against Hannibal involving man-eating boars, but Hannibal manages to escape and Margot, finally having had enough of her monstrous sibling, ends things once and for all. How does she avenge a lifetime of abuse? First of all, she gets what she always wanted (his semen) by sodomizing him with a cattle prod. And then she kills him by shoving his own pet moray eel down his throat.

And you thought your Thanksgiving dinners were awkward!

It remains to be seen how much of this will be directly translated onto the TV show, especially since the series seems to be starting to depart more and more from its source material. But, regardless of how much the writers might change, rest assured that something horrific will go down between Margot, Mason, and Hannibal this season.

Mason, who will be played by Boardwalk Empire 's Michael Pitt, makes his first appearance on the show this Friday. Don't miss the introduction of this despicable villain.

More like this
Where Is Oscar Torres In 'Only Murders In The Building' Season 2?
By El Hunt
Yinka Bokinni Recalls Terrifying Truth At Heart Of 'How To Hire A Hitman'
By Frances Stewart
'Sherwood’s Filming Locations Hold Deeper Meaning
By Rachel Mantock
What Song Does Eddie Play in 'Stranger Things'? Metallica’s “Master Of Puppets” Ignites The Season 4 Finale
By Alyssa Lapid
Get Even More From Bustle — Sign Up For The Newsletter