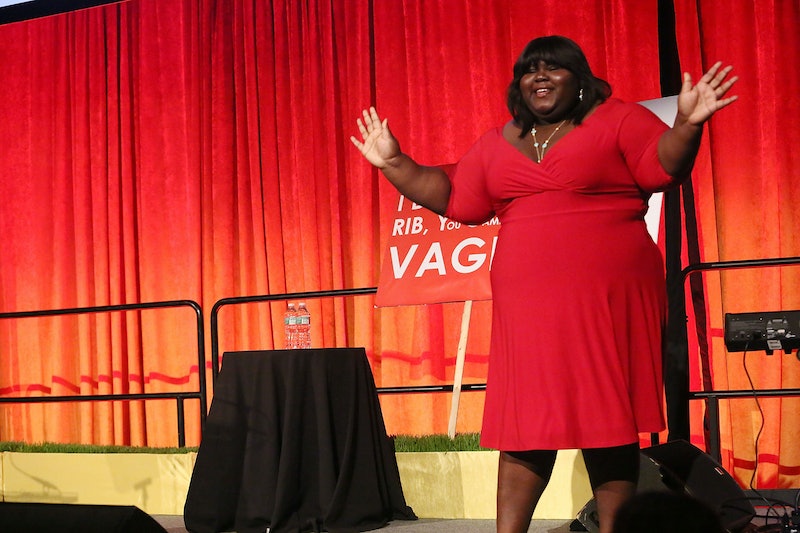 One would think an Oscar nomination and hit TV show would be enough explanation, but apparently, American Horror Story's Gabourey Sidibe still gets asked all the time how she gets her confidence. While speaking at the Gloria Awards and Gala Thursday night, the actress gave an impassioned, incredible speech about self-worth, body image, and fighting her critics, revealing her frustration with having to explain her confidence so often and wondering why skinnier stars don't get asked the same question.

"I always wonder if that's the first thing they ask Rihanna when they meet her," Sidibe said. "'RiRi! How are you so confident?' Nope. No. No. But me? They ask me with that same incredulous disbelief every single time."

Vulture has the entire transcribed speech available for reading, and trust us, it's worth your time. Funny, stirring, and, yes, confident, it epitomizes everything we adore about Sidibe, and reminds us why she's one of the best role models for women in Hollywood. Below, a few of the best quotes from her speech.

"And I was so proud of those cookies, and all the effort I put into making them, I started to think that maybe I wouldn't just be the first woman black President — maybe I would also be a celebrity chef! I mean, why limit myself?"

Even in elementary school, Sidibe had the kind of confidence that apparently baffles so many people who meet her today.

On being bullied at school and at home

"So I never felt safe when I was at home. And my response was always to eat more, because nothing says, 'You hurt my feelings. Fuck you!' like eating a delicious cookie. Cookies never hurt me."

Amen to that. Sidibe's story of being berated by her parents for her weight is heartbreaking, and her method of coping is relatable to many.

On dressing up for events

"Sometimes when I'm being interviewed by a fashion reporter, I can see it in her eyes, 'How is she getting away with this? Why is she so confident? How does she deal with that body? Oh my God, I'm going to catch fat!'"

And for those who don't like how she looks all dressed up, Sidibe has a response all ready.

On always being prepared

[She pulls a tissue from her cleavage and dabs her eyes] "That's what boobs are for!"

On doing what she wants

"I live my life, because I dare. I dare to show up when everyone else might hide their faces and hide their bodies in shame."

Sidibe admits that her mantra of doing what she wants, rather than what other people want her to do, doesn't always go over well, but she long ago realized that having a "good time" and a "good life" overrides the criticism she might get her for her actions.

"So when you ask me how I'm so confident, I know what you're really asking me: how could someone like me be confident? Go ask Rihanna, asshole!"

In what may be the best last sentence of a speech ever, Sidibe sums up her message by bringing it back to the beginning. Her self-confidence doesn't require any more explanation than that of Rihanna or any other celebrity, despite what some critics may think. With role after role, Sidibe has proven that she's a star, as well as a valuable role model for women. No one in their right minds has any basis on which to question her worth.

More like this
Olivia Munn Got Real About How Her Body Hasn’t “Snapped Back” Post-Pregnancy
By Stephanie Topacio Long
Bustle Newsletter: June 30, 2022
By Stephanie Talmadge
Adele’s All-Female Lineup Includes Kacey Musgraves, Mahalia, & Self Esteem
By Shahed Ezaydi
I Have Eyebrow Alopecia – & Microblading Gave Me My Confidence Back
By Jessica Morgan
Get Even More From Bustle — Sign Up For The Newsletter