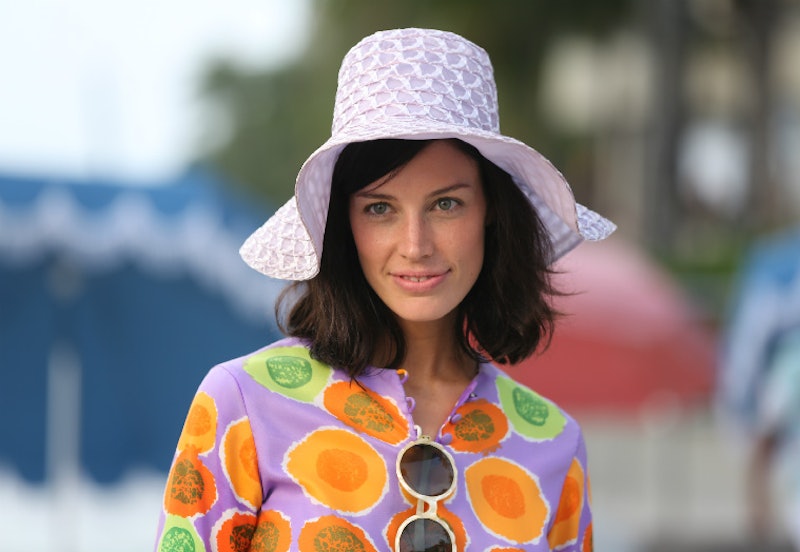 Okay, so I know we all unanimously decided that Matthew Weiner is probably trolling us and that Mad Men's Megan Draper is not Sharon Tate (and that she won't die a gruesome death at the hands of the Manson Family), but what if he's double trolling us and she is going to die? Guys, just hear me out: What if Weiner is pulling a Friends move — you know, the one where everybody finds out about Monica and Chandler — and is playing with our minds. The only difference here is that he knows that we know that he knows, but we don't know if the thing we know is actually the thing. Are you catching my drift yet?

The point is, Weiner might actually be playing with our minds on a completely different level. He's got us right where he wants us: We all think he's planting Sharon Tate clues everywhere just to mess with us, but in actuality, he might be blindsiding us. Now, I know that I just theorized a theory, but the adrenaline coursing through my veins due to the series coming to an end is making me say crazy things — plus, I've been watching a lot of Survivor. I completely understand that Weiner is most likely just having fun with us, but it would be kind of ridiculous if he's hiding all of these clues just to mess with the audience. Talk about breaking the fourth wall.

Season 6 of the show came with a boatload of Sharon Tate Easter eggs — red-star t-shirt, Sally reading Rosemary's Baby, etc. — so it's only fair that Season 7 gets to have a little fun with the theory. Check out some of the new clues:

1. Megan lives somewhere in the canyons of Los Angeles, which is where Tate was murdered.

During the episode, Megan comments on the howling coyotes by saying, “It’s just what happens to the sound in the canyons.” And thanks to the connection made by Tom + Lorenzo, here is something quite similar that was said in the book about the Manson Family murders, Helter Skelter:

It was so quiet, one of the killers would later say, you could almost hear the sound of ice rattling in cocktail shakers in the homes way down the canyon.

The canyons above Hollywood and Beverly hills play tricks with sounds. A noise clearly audible a mile away may be indistinguishable at a few hundred feet.

2. Peggy is seen holding a can of Folger's coffee — Abigail Folger was a victim of the Manson Family murders.

3. So many Valley of the Dolls connections.

Megan is auditioning for NBC's Bracken's World, which was written by Dorothy Kingsley, who also co-wrote Valley of the Dolls (the film that made Tate famous). Also, in the season premiere, Don is seen watching the Joey Bishop Show , whose titular character starred alongside Tate in Valley of the Dolls.

*But my personal favorite new clue is the fake one that The New Yorker 's television critic Emily Nussbaum tweeted:

Nussbaum might be joking, but who knows, Tate probably did have a green phone. It was the '60s, after all.

Okay, I'm done trolling the Internet with my twisted and overthought theories. No matter what happens, I give Weiner props for creating a show that has inspired so many delicious theories that just won't die. And if Megan doesn't end up dying, then I just hope that Charles Manson is seen crossing the street in the background. Is that too much to ask for?