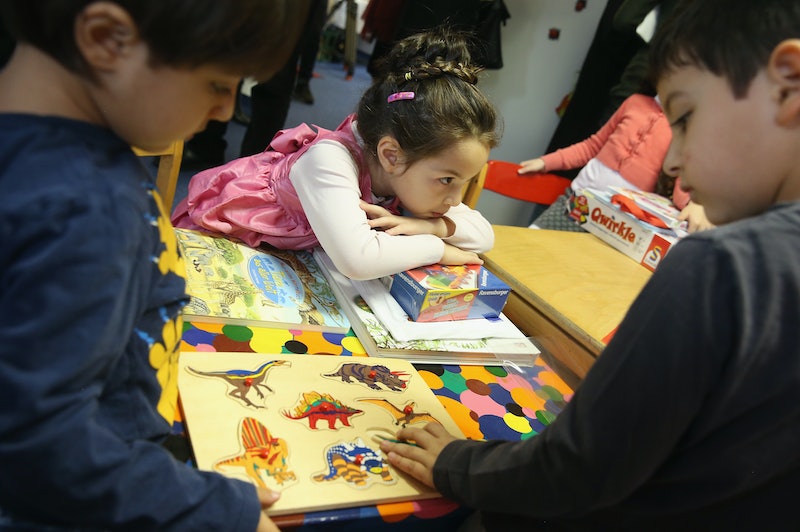 In the so-called battle of the sexes, the "fairer sex" can put at least one decisive victory in their column, namely: grades. In seems that, at all grade levels and in all subjects, girls consistently get better grades than boys, and have since at least 1914. So that's a solid century of high academic achievement. High fives all around, ladies!

According to new research from the American Psychological Association, it's true that boys do better on standardized tests (possibly as a result of stereotype threat), but when it comes to grades there is no competition. And, in fact, girls' dominance doesn't just exist in the "girly" subjects like reading and history, but also extends to subjects boys are supposedly better at, like math and science. Also, even though the common wisdom says that girls "dumb themselves down" in middle and high school, in actuality that's not the case at all. In fact, in some subjects their grades actually get even more superior to their male counterparts during those years.

All of this, of course, begs the question why these superior grades don't translate into more real world benefits. If girls do better in school, why doesn't this translate into better – or at the very least equal – starting salaries once leaving school? And if girls show more skill in math and science, why are they often funneled away from STEM fields? And why don't the girls who do pursue STEM careers, presumably getting better grades in the process, still recieve lower salaries?

It could perhaps be a confidence issue, or it could be that the gender pay gap perpetuates itself by making women resigned to less pay. It's also possible that other factors, like girls earning less allowance money, have something to do with it. Or maybe it's just garden variety sexism. Who knows?

On thing is clear though: things like the pay gap and the lack of women in STEM fields has nothing to do with women's ability. So all of that "women's pay makes perfect sense and also what about the men" rhetoric can just stop. Because clearly girls are proving themselves in school. So if the workplace wants to treat them as inferior, that is certainly not on them.

More like this
MOBO Awards Found Kanya King On The Woman Whose Grit & Determination Spur Her On
By Kanya King
Here’s Your Daily Horoscope for December 5, 2022
By Mecca Woods
7 Dos & Don'ts To Follow For The December 2022 Full Moon
By Brittany Beringer
Here's How To Support Jewish People Amid Rising Antisemitism
By Hannah Orenstein
Get Even More From Bustle — Sign Up For The Newsletter