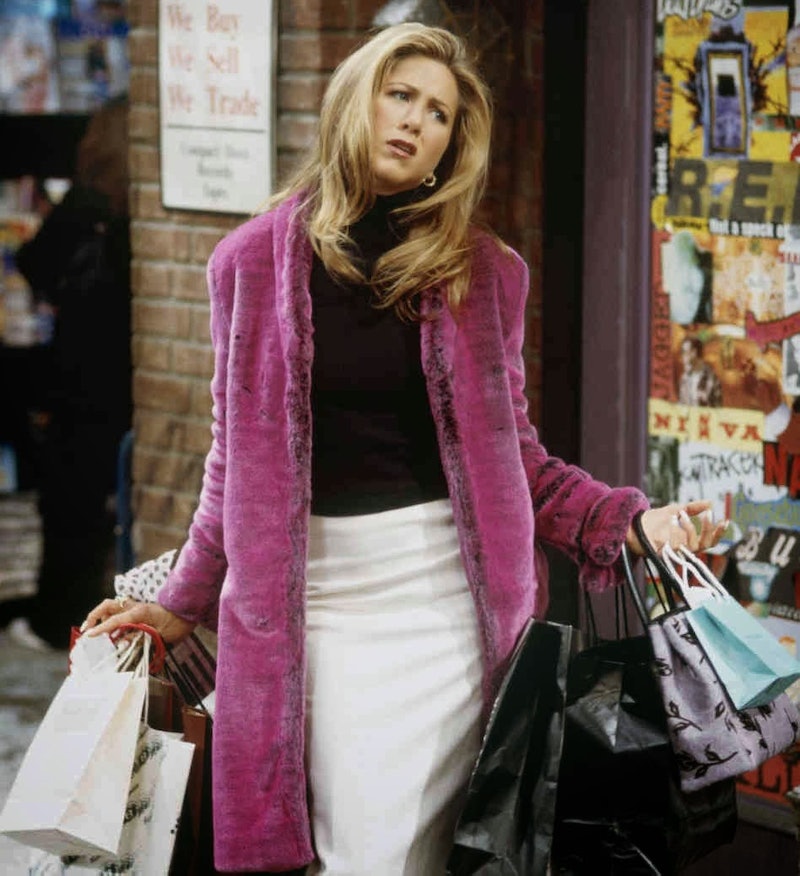 Even though Friends ended 10 years ago, much of the series still holds up. You can sit down to watch a repeat of any episode from its 10-season run and be guaranteed to laugh at almost every joke. Because it's 10 years old, however, you're also likely to laugh at a lot of the fashion. Airing from 1994 to 2004, all six of Friends' main characters fell victim to many trends, though none more than Rachel Green. Maybe it's because she loved fashion, but looking back, Rachel had some awful clothes. Yet somehow, she pulled them off. In fact, sometimes we'll watch an old episode and actually like one of Rachel's awful outfits.

Or, to be honest, a lot more than one. Is it because we love Rachel so much that in our eyes, she can do no wrong? Do we have that bad a case of '90s nostalgia? Or did Rachel really just know how to rock even the worst of fads? Whatever the reason, Rachel has some outfits that even as we mock them, a part of us kind of wants to sneak into her closet and try them on.

Here are 13 of Rachel's worst outfits that we secretly love.

Friends featured a lot of overalls in the early years and no offense to Monica, but no one pulled them off better than Rachel. Pairing denim overalls with a sweater around the waist should be awful and to the non-fan probably is, but for Rachel, it's just adorable.

Can someone please explain how Rachel got away with wearing the most unflatteringly cut denim shirt of all time over a crew neck T-shirt, with a pendant, and still looked amazing? Did the Friends pilot actually hypnotize us?

Apparently Rachel is very into unnecessary layering, but hey, that's one way to wear a spaghetti strap dress year-round.

Now a weird, plaid neckline on top of a turtleneck? Maybe Rachel was aware of her special ability to make the worst '90s trends timeless essentials.

Even the Rachel "that could have been" turns awful items into secret must-haves. Knee-length bright pink fur has never been so appealing.

First of all, round of applause for that quote. Now take a moment to seriously consider wearing a shirt made of some sort of velvet-like material for the first time in about 15 years.

Question: What do knee-socks, a cropped semi-turtleneck, and a plaid skirt all have in common? Answer: You never considered wearing them at once (or maybe at all) until watching Friends.

Proof that Rachel's unparalleled skill to make us jealous of objectively awful clothes started way before she moved in with Monica.

Again with the turtleneck and plaid! And this time it even helped her land Tag.

Is that a real tie or just the top part? Is it attached to the shirt or did she put that together herself? Why am I about to raid my boyfriend's closet? How does Rachel have this effect on me?

I may not know what exactly that center stripe is or why it's there, but I know I love it with all of my heart.

Basically, the thicker the turtleneck, the better Rachel makes it look—especially if its sleeveless.

Ten years, and we still don't know how she does it.