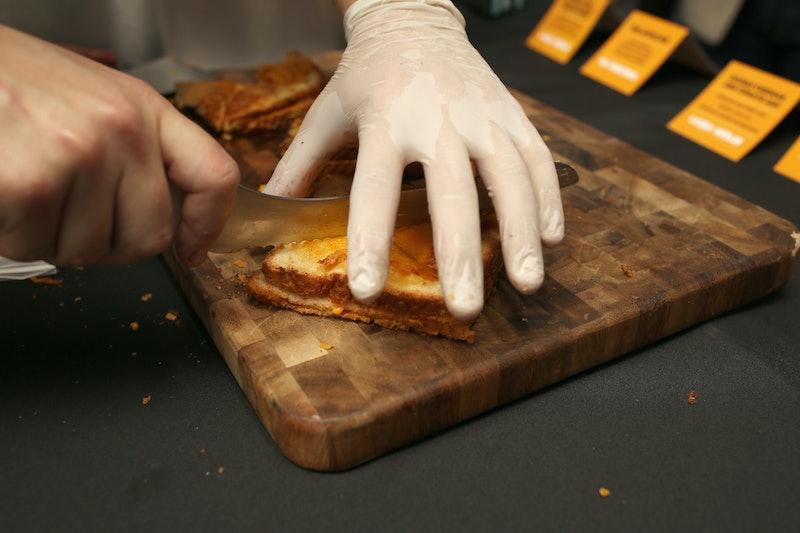 You know what’s awesome? Grilled cheese. You know what’s also awesome? Parachutes. You know what happens when you put the two of them together? An Australian sandwich company called Jafflechutes that delivers grilled cheese sandwiches via parachute — or, as I like to call it, “So Much Awesome I Might Just Explode from the Awesomeness." Is this, in fact, the greatest invention food innovation of the modern age?

Jafflechutes gets its name from the Aussie term for grilled cheese (“jaffle”). It started nine months ago as the world’s first float-down eatery, delivering grilled cheese and tomato and grilled cheese and ham sandwiches to hungry Melbournians courtesy of a clever system and a whole bunch of tiny, adorable parachutes. First, you order and pay via PayPal; then, you wait at a specific location at a specific time; and voila! A sandwich arrives from on high, drifting down manna from the heavens. It’s kind of like the sponsor gifts in The Hunger Games , minus all the death and badness and stuff.

But Jafflechutes didn’t stop there — they thought big. Really big. North American big. And now, thanks to a successful crowd funding campaign, Jafflechutes are coming to the U.S. First stop: New York City! According to the Huffington Post, an actual arrival date has yet to be set, but that’s OK. I’m totally willing to wait. Who wouldn’t for something this amazing?

Said Jafflechutes co-creator Adam Grant via email to Fast Co. Exist, “We stumbled into doing Jafflechutes after a weekend at a countryside Airbnb rental without electricity or Internet.” He continued, “Without the distraction of YouTube and video games, we spent the night talking about crazy business ideas, and by morning we had created Melbourne’s first float-down eatery.” (Note to self: Unplug this weekend and see what wild and wacky ideas emerge.) It was never intended to be a money-making venture, but business looks like it’s booming, so hoorah for that, right?

Oh, and don’t worry if your sandwich gets stuck somewhere on its way down; according to the Jafflechute FAQ, they’ll (probably) make you another. Whatever you do, don’t try to retrieve it. Although no one has ever been injured by a falling jafflechute, the company doesn’t recommend climbing any trees to unstick a stuck sandwich. It's probably all for the best, anyway.

You know what? You’ve really got to see this to believe it, so here. Have a video. Who needs a cupcake ATM when you’ve got flying sandwiches?