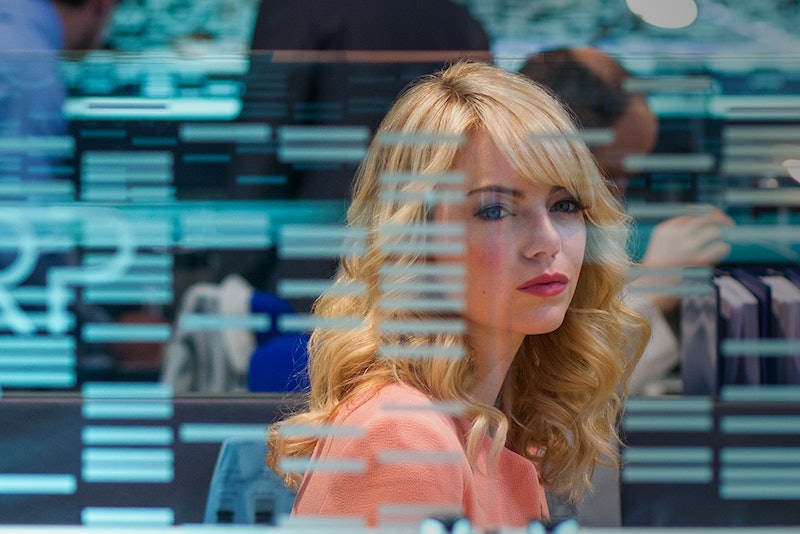 [Warning: This article contains major spoilers for The Amazing Spider-Man 2. Turn back now if you have not seen it and care about not knowing big plot things.] Gwen Stacy's fateful final fall in The Amazing Spider-Man 2 will certainly take many movie-goers by surprise in the coming weeks. In the wider scope of superhero movies and their source material, though, it was a long time coming: Stacy's fall, in her light blue jacket — and her almost-save by her boyfriend Peter Parker — is an iconic moment in the Spider-Man comics. In fact, considering the jokes Parker makes in the original — as he unknowingly pulls his dead girlfriend up by the web — some could say she got off easy. Regardless, though, Gwen Stacy's fate is sealed. And in the process she's joined the ranks of thousands of fictional women killed for their men.

There are definitely supporting women characters in sci-fi/fantasy who make it through the stories they're in without being sacrificed for their love interest's heroic arcs: Ginny Weasley in the Harry Potter series is one (though she does get dumped temporarily). Jane Foster in Thor is another, as is Pepper Potts, who kicks major ass in Iron Man 3. For every one of those, though, there are five Rachel Daweses from Batman, thrown out a window (sometimes literally) so that the man who loves her can feel angst more darkly in the upcoming threequel.

It is a storytelling device understandable in a lot of ways — tradition dictates heroic stories must have their angst! — but infuriating in its overuse. It's a narrative crutch, basically, and one that's indicative of a much larger issue in the portrayal of women in heroic stories.

Basically, what happened to Stone's Gwen Stacy in The Amazing Spider-Man 2 is in no way innovative. In fact, the killing of the female character in service of the deepening of her love interest's emotional arc is so common it has multiple terms associated with it.

Here's the definition of one of them — known as "women in refrigerators" or "fridging" — according to Geek Feminism Wiki:

A common trope where a woman is brutally murdered in order to progress the male protagonist's story line. The term is more broadly used to describe systemic violence against women in comics.

This is what happened to Gwen Stacy. There is no doubt about it. She was, in the textbook sense of the word, fridged. She was fridged hard. Her death was used for his emotional evolution and in fact, her particular version of this is so iconic in the comic book world that it's got its own TV Tropes page called "I Let Gwen Stacy Die."

As that entry reads:

Often, a hero needs more of a reason to keep on fighting than just to save the day. He needs to know that it's fairly Serious Business. That's why, on occasion, someone close to him will die for generally no other reason than for the hero to angst over his inability to save the loved one, driving him to protect everyone else he can.

But we should remember Gwen Stacy as more than the victim of an exhausted trope.

I am, as one voice in the crowd, damn tired of fridging. I know a lot of people who feel similarly. I think superhero movies need to do better, I think Marvel and Sony and Fox and DC and everyone in charge of bringing comic book stories to a larger audience need to do better by their ladies — and by the big screen adaptations of these ladies. I, for one, would watch a whole damn Gwen Stacy movie, just her trying to figure out the science and social scene at Oxford. I would watch Pepper Potts destroy a thousand more villains the way she did in Iron Man 3. The lack of a Black Widow solo movie pisses me off practically daily.

I think we need more. Scratch that: I know we need more. We all do. We deserve it. Emma Stone deserves more. Andrew Garfield already seems to know we all need more. It's about time Hollywood caught up.

In the meantime, though, I will not abandon Gwen Stacy. I will criticize the choices of the people in charge of her destiny, yes — loudly, publicly, and until the cows come home. But I will not let her ending define her. Because Gwen Stacy rocks.

Andrew Garfield's Peter Parker may get the vast majority of the screen time in both of the existing Amazing Spider-Man movies, but let's not fool ourselves here: Stone is starring just as hard. Without that energy, that undeniable chemistry? It all falls apart. Peter Parker becomes just another dopey dude pining after just another mercurial lady. But it's also more than that: Though the writing itself may not always lend to this point, Gwen Stacy is not just there for Peter Parker. That, in this case, lies with Stone's performance: She imbues Gwen with a richness that immediately elevates her from supporting character to genuine co-star. Now, if only her story had highlighted the fact that she died a hero, rather than the fact that her boyfriend's sad she's gone. What's most gutting to me about the death of Gwen Stacy isn't that Peter lost her — it's that she lost her. It's that she never got to go to Oxford. "This is something I really have to do," she tells Peter. But she never gets to. But her last acts before being sacrificed for Peter Parker are much bigger than Peter, and much bigger than Oxford: She saves the entire damn city. "Nobody makes my choices for me," she says to Peter as he tries to leave her behind to protect her from the film's villains. "This is my choice." And her last choice is pretty damn badass. I understand why she died, but I want more for her, and I want more for us. I will continue to rail against the systemic sidelining of truly great women. But in the meantime I'm gonna do the girl a solid: I'm gonna remember her for the badass that she was, and not for the trope that ended her.