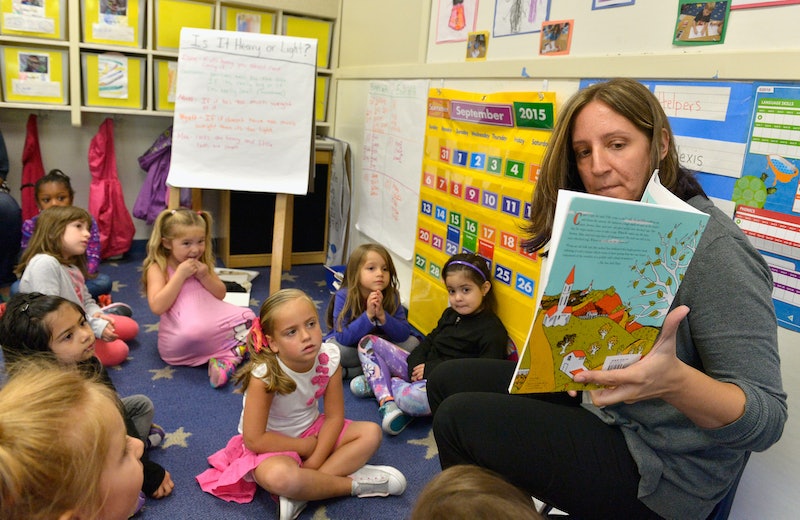 Men and women who give their time to educate the world's children, often with minimal resources and pay, deserve to be celebrated every day, but particularly Tuesday, on National Teacher Appreciation Day. Everyone remembers at least one teacher that inspired them or pushed her to be more ambitious. Often we remember teachers less for the specific lessons on ABCs and 123s, and more for the time and support they gave us when they stayed late after class to help us when we struggled or encouraged us when we were succeeding. And there's often nothing better than when a teacher opens your eyes to something you've never thought about before.

Unfortunately pop culture often presents teachers as antagonists, like Richard Vernor of The Breakfast Club , or dull and clueless (Bueller? Bueller?), who keep their students down. And it can be the same in literature, which is particularly discouraging in YA and children's novels, because, while there are always bad teacher seeds, it sends the message that teachers are something to endure, not appreciate.

There are, however, a handful of examples of teachers from children's and YA novels that are kind or eccentric or inspiring, but most of all give everything they have to their children — even if their methods are unconventional. I nominate giving an apple to each of these 11 literary teachers.

Miss Frizzle is all about hands-on education. Whether she's going through the town's water purification system, inside the human body, or on the ocean floor, Miss Frizzle won't let anything stop her from teaching her students in the best way possible. The school bus gets all the love, but it's Miss Frizzle and her unrelenting thirst for her students' knowledge that is really the magical part. Plus, the girl has killer style.

At first, Miss Lupescu seemed like the worst kind of substitute teacher. Bod has been raised in a graveyard, and as Bod's new teacher and guardian, she is strict, boring, and feeds him healthy foods like beetroot-barley-stew-soup instead of junk food and pizza. But maybe, just maybe, this is Miss Lupescu's plan all along: to teach Bod the discipline and give him the knowledge he'll need to survive. And there's more to Miss Lupescu than Bod can see at first...

Miss Binney loves kindergartner Ramona's big, bold handwriting on the letter Q and her different drawings. Ramona loves Miss Binney so much that she refuses to go to class when there's a substitute teacher. But when Ramona pulls Susan's bouncy curls in class one day, Miss Binney sends her home from school, which sends Ramona into a tailspin. Miss Binney is then a good enough teacher to know that Ramona might need a little extra attention, so she sends her a letter, which restores Ramona's faith and her love of both her teacher and kindergarten.

In a 2000 interview with CBC News World, J.K. Rowling said that Dumbledore was the "epitome of goodness," and fans would probably agree. He's a stately, kind teacher, but he's willing to teach Harry Potter the tough lessons he'll need for his future. Despite Dumbledore's incredible powers, he chooses to use them for good, instead of evil, and he teaches the other wizards to fall in his footsteps.

Matilda 's Miss Honey is presented as an extreme opposite to her aunt Miss Trunchbull, who forces Bruce Bogtrotter to eat a gigantic chocolate cake when he steals a piece and locks students in a closet called The Chokey. Instead, Miss Honey is sweet, quiet, and kind-hearted, and she is horrified to learn of Matilda's treatment at home. Ultimately, Miss Honey is so devoted a teacher she takes in Matilda to ensure her a happy, healthy, book-loving home.

After freshman Melinda Sordino's terrifying rape by a senior at a party, she falls into silence, refusing to admit to herself what happened. It's her art class and her teacher, Mr. Freeman, that give her solace and a voice through art to come to terms with what happened and face it head on.

Inspired by her own teachers in Anne of Green Gables, Anne Shirley enters the second chapter of her life as the only schoolteacher in Avonlea. She may not be perfect (who is?), but her heart and her intentions are always in the right place. As a teacher, Anne encourages spirit and imagination of her young pupils, which remind her of her own spunky childhood self.

Mrs. Jewls isn't the most conventional teacher, but she is beloved by all her students for her quirky methods — her student Damon is in love with her and Calvin even named his cat after her. Mrs. Jewls keeps a coffee can of Tootsie Pops on her desk as a reward for her students, teaches them gravity by throwing their computers out the window, and makes ice cream flavors for each student in her 30-person class when Mauricia, who loves ice cream, is upset.

Miss Nelson is such a nice teacher that her students take advantage of her. The classroom becomes a spitball and paper airplane chaos, so Miss Nelson concocts a plan, showing her fortitude as a teacher and how she never gives up on her students. When Miss Nelson doesn't show up to school, her substitute is Miss Voila Swamp, who bogs the kids down with schoolwork and is a strict disciplinarian. The kids, clearly, begin to miss their kind teacher and are thrilled — and more importantly, more respectful — when she returns. But Miss Nelson has a secret — could Miss Swamp have been her in disguise?

Headstrong 14-year-old Ida Bidson dreams about being a teacher, but she doesn't have to wait until she's all grown up. When her tiny school in Colorado shuts down, it ruins her chance of graduating and becoming a teacher. Ida makes a plan to secretly re-open it, and install herself at the head of the class. Ida would do anything to ensure that the children in her town have access to education and she gets to fulfill her teaching dreams, even undertaking this massive plan while still having to do all the chores of a regular 14-year-old.

Okay just kidding. While he may as well have been a great teacher, he had a long-running affair with one of his students that kind of kills his chance of Educator of the Year. But just look at him...