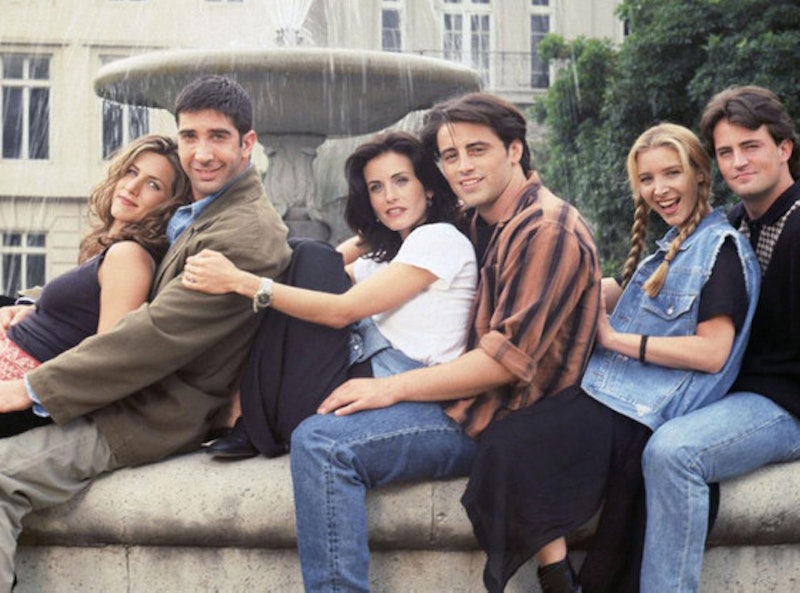 Friends wrapped up its successful 10-season run on NBC on May 6, 2004, and as we celebrate that monumental anniversary, it's safe to say that fans love the show just as much now as they did then, if not a little bit more. But let's be honest with ourselves: no matter how much Friends made us laugh or swoon or collectively hate Emily, it could also be an incredibly frustrating sitcom. In fact, probably even more so now than when it originally aired. If you were a teen or pre-teen who grew up watching the wacky escapades of Ross, Rachel, Joey, Monica, Chandler, and Phoebe in New York City's picturesque West Village, there's probably a part of you that watches it now and thinks, "Wait...my 20's have looked nothing like this!

If you grew up hoping your 20's would look a lot like the gang on Friends, there's a good chance that -- with the exception of some frustrating on-and-off romantic sagas within your friend group (like the ballad of Ross and Rachel) or if you're still waiting for your big break (Joey, we thought Mac & C.H.E.E.S.E. would be a big hit, too) -- it's nothing as overwhelmingly carefree or funny as their lives were. Where's my rent-controlled apartment and dream job at Ralph Lauren?! How come when I dance in a fountain with my best pals, we all get in trouble with the law?"

While we think that Friends got a lot right about the trials and tribulations of getting through your twenties, there was a whole lot they got wrong, too. Here's all the marks that Friends missed about twentysomethings:

You Will See Your Friends All the Time, Especially in New York City

Okay, granted most of these people lived with each other, and/or across the hall or the street, if you're a young, gainfully employed urbanite, you're going to see your friends once a week if you're lucky. And even if you have a tight-knit crew like the one on Friends, you're still going to branch out from time-to-time to hang with work colleagues or make some new friends along the way. In a perfect world, yes, you would see all your best friends all the time and seemingly never get sick of each other, but rarely is geography or life in general as much on your side as it was for the characters on Friends.

Look, not all friend groups hang out in bars all the time, but the gang on Friends could probably count on one hand the number of times they all went out to grab a beer or a cocktail. We get that the coffee shop was their thing, but if you're a single twentysomething living in a city, you are going to be at a bar more times than you can probably count.

You'll Always Get a Spot at Your Favorite Hangout

Okay, this one doesn't just apply to your 20's. Because, seriously, good luck trying to get a seat at your favorite coffee shop/bar/restaurant/whatever, let alone the same one every single time. (This also applies to the phenomenon of no one on Friends ever locking their doors. Don't do that.)

You'll Live in a Dream, Rent-Controlled Apartment With Your BFF

Only one of friends the Friends had a truly nightmarish roommate experience (Chandler with the serial killer-esque Eddie), while the rest got to live in incredible, spacious West Village apartments (often times on the salary of an out-of-work actor or a coffee shop waitress), most of the time with their significant other or their best buddies in the world. In reality, every true twentysomething goes through a at least one hellish rotation of crazy roommates and/or tiny, dreary apartments.

You Won't Branch Out

No matter how close you are to your friends, you're going to have other friends and other experiences outside of them. Heck, you might even meet a person outside of your race or one that doesn't live within a two-minute walk from your place. Shocking, but true.