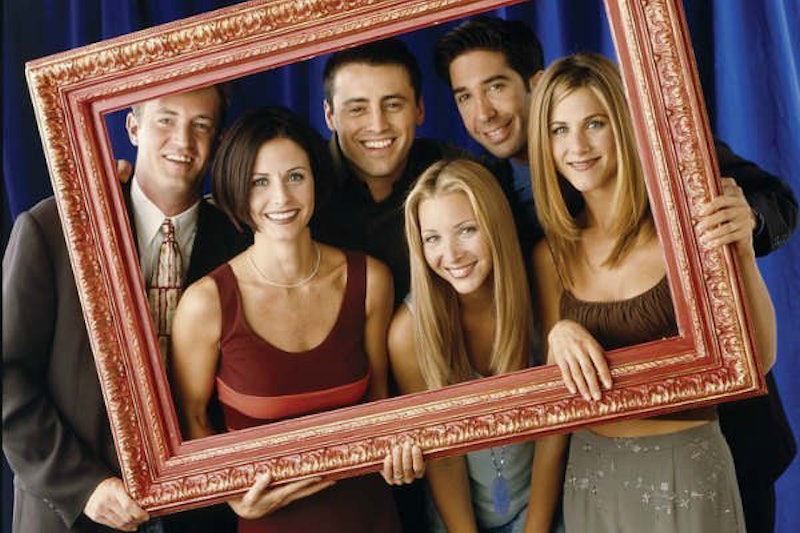 It's kind of hard to believe that Friends has been over for ten years, isn't it? Not only because that decade seemed to go by in the blink of an eye (sorta like your 20's, actually), but because the beloved Emmy-winning series is still so much a part of our lives. Whether their famous catchphrases have remained a part of your lexicon ("How you doin?", "We were on a break!" "Pivot!") or you're appreciating the greatness of Friends for the first -- or millionth time -- on Nick at Nite, the show has resonated with audiences well past its wildly popular run on NBC from 1994 to 2004.

Friends naysayers (yes, those people exist and they are as terrible as Phoebe's twin Ursula) will argue that the sitcom was nothing more than a silly, saccharine look at life in Manhattan, but the show, despite some of its obvious flaws (no minorities, seemingly very cheap rent) still hit a lot of things right on the head about navigating love, friendships, and careers in your 20's. Heck, even their ubiquitous-in-the-mid-'90s theme song by The Rembrandts "I'll Be There For You" summed it up pretty perfectly: "No one told you life was gonna be this way/You're job's a joke, you're broke, your love life's DOA."

There's a reason why Friends is still popular with the generation that grew up with it: not only is it still hilarious (good luck trying not to lose it watching the leather pants episode) and filled with nostalgia (the Rachel haircut!), but it resonates on an even deeper level. Here's all the ways that Friends got the ups, downs, and everything in between of being in your 20's right:

Your Friends Will Become Your Second Family

Sure, in Ross and Monica's case they were already related, but for the rest of them it all rings very true: when you're in your 20's (especially if you're living in a big city like New York) your friends will become your second family. They become your emotional support system and the people you spend most of your time with. These characters experienced just about everything together and enjoyed each other's company before they all paired off and/or moved away in their 30's. Friends captures the true glory days that are your post-college twenty-something friendship groups. They're truly the best you'll ever have.

Your Friends Will Become Something More

"Can men and women just be friends?" Of course! But in your 20's, at some point, you're going to hook up with at least one of them. Some of those relationships will be on and off and on a break (like Ross and Rachel); some of those relationships will blossom into true love (like Monica and Chandler); and some of those will seem like a good idea for a hot minute and then you'll realize it's actually an awful idea (like Ross and Phoebe on the pool table). And sure, Friends really messed up when they tried to get Joey and Rachel together and failed miserably, but it just goes to show you that it's best for you have to get those friends hook-ups out of your system in your 20's.

You Will Have Your Heart Broken... A Few Times

With the exception of Joey (poor Joey) all of the friends on Friends had a romantic happily ever after, but it took a whole lot of failed or just plain bad relationships to get them there. Ross broke Rachel's heart when he had a one-night stand during their "break" (they patched things up in the end, of course), which was bad enough considering she already dated duds like Barry and Paolo in her 20's. Monica thought she found the love of her life with Richard (it would turn out to be Chandler, of course) and was devastated when he said he wouldn't have children with her, while Phoebe had to go through the pain of repeatedly losing David to Minsk (but thankfully met the superior Mike, her future husband, later on.) The gang went through a lot of romantic hurdles in their 20's, but they all survived it, and so will you.

You Will Have Some Truly Humiliating Jobs

You've gotta give Friends credit: unlike the actors, none of these characters had overnight success in their careers. These people got fired, put on leave, or had such dreadfully boring jobs not even their best friends knew what they were. ("He's a transponster!") Whether you're trying to cut your teeth as an actor and wind up in a truly embarrassing infomercial or you're just trying to pay the bills with a surprisingly stressful toner telemarketing gig, the characters on Friends knew those humiliating lows all too well.

Your 20's are all about trying to find your footing, so it's unlikely during that time you'll stay put in one place. If you live in a major metropolitan area like, say, New York City, it's pretty much a guarantee that you'll move at least a half a dozen time in your 20's. The gang on Friends apartment and roommate swapped constantly (lucky for them, they usually only had to move across the hall). Some were a success (Rachel and Monica, Chandler and Joey), while others were a disaster (Ross and anyone), but let's be honest, any of them were crazy to ever leave the purple apartment.

Oh my GAWD, will you ever.