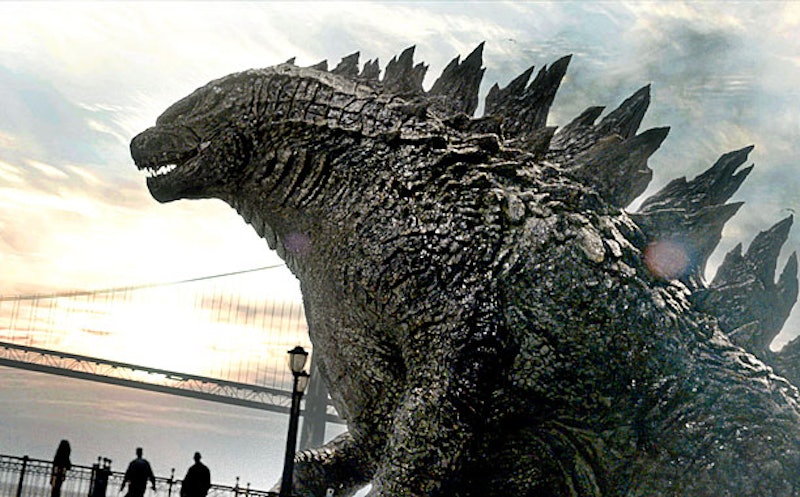 While Godzilla has been promoting itself like crazy, one things that hadn't gotten a lot of air time was the actual reptilian monster. But several days ago a trailer was finally released that put the monster front and center and after his big reveal some people are complaining that Godzilla looks too fat. It seems like those who are primarily upset by the monster's robust body are Japanese fans. “When I finally saw it, I was a bit taken aback,” one fan said at a Tokyo exhibition of Godzilla paintings. “It’s fat from the neck downwards and massive at the bottom.”

The appearance is inviting a lot of American stereotype jokes with people saying Hollywood has “done a ‘super-size me,’” and calling Godzilla “a calorie monster” and “Godzilla Deluxe.” Of course American fans are hurling stereotypes right back saying accusatory things like "Apparently the land that brought us sumo wrestling thinks that the new Godzilla is too fat."

I'm not going to sit here and compare the original Godzilla and the 2014 Godzilla in hopes of proving those fans wrong. Instead I think there's a larger issue here (no pun intended). Are we really at the point where we fat-shame CGI monsters? Has our view of body image dipped so low that even animated characters are subjected to judgement?

Perhaps it's all in good fun that people are joking around about its size, but using cultural stereotypes to mock a digital rendering of a giant lizard just seems like a low blow. And the worst part is that it's happening on both sides.

What does it say about both of our societies that we judge the figures of invented creatures by insulting actual people? Maybe those complaining need to spend less time fat-shaming Godzilla and more time noticing how quickly they jump to using stereotypes to gain a few laughs.

More like this
20 Photos From The 'Stranger Things' Season 4 Premiere To Make You Feel Old
By Alyssa Lapid
Marvel's 'She-Hulk' Trailer Is Finally Here & The Hulk Lends A Big Helping Hand
By Grace Wehniainen
Everything To Know About Marvel's 'Echo' Series On Disney+
By Grace Wehniainen
What Does Doctor Strange’s Third Eye Mean?
By Arya Roshanian
Get Even More From Bustle — Sign Up For The Newsletter