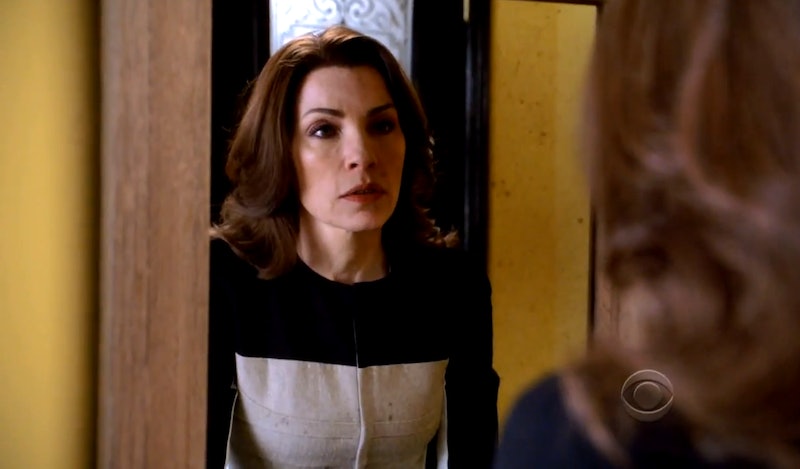 We learned two very important things from Sunday night’s new episode of The Good Wife, “The Deep Web”: Alicia Florrick isn’t ready for love just yet and Finn Polmar is still the one person in Alicia’s life who truly understands her. It’s like I've been saying all this time: Finn is awesome. “The Deep Web” also revealed that Louis Canning (Michael J. Fox), Lockhart/Gardner’s new partner, only has 12 months to live. Whoa. The Canning reveal was definitely a surprise, but it was overshadowed by Alicia’s emotional scenes with her mother Veronica (played by veteran actress Stockard Channing), and an interesting phone conversation with Finn near the end of the episode.

Clearly, in the wake of Will Gardner's death, Alicia has been going through a rough patch. But in true Alicia fashion, she’s kept all of her emotions bottled up inside her. While having lunch with her mother, Alicia finally begins to open up a bit about how she’s feeling. She tells her mother, “I don’t know what I’m doing with my life... I don’t know if I want to be a lawyer anymore.” Damn, Alicia! If you quit being a lawyer, CBS doesn’t have a show! As she begins to cry, her mother’s foxy date shows up to lunch and totally spoils the moment. Alicia lies and says that she needs to get back to work and leaves.

Luckily, Veronica shows up at Alicia’s apartment later that day to apologize for the interruption — and to drink some red wine. The two get to talking and Alicia opens up even more, saying that she’s like her deceased father in that she’s “stuck being the good one.” “I don’t know what I am anymore. Nothing’s as simple as it used to be ... I’m spinning. I can’t stop ... I don’t know what to do, Mom,” Alicia says. At this point, she collapses into her mother’s arms, sobbing.

This is a lot to process. Okay, so Alicia’s marriage to Peter is now strictly for appearances only. Will, the man who may have been the love of Alicia's life, is gone forever. What does this mean for her future? Will she ever find love again? Is there even a point in looking? Is she allowed to look? What are the “rules” of her new arrangement with Peter? What kind of example is she setting for her kids? I imagine these are just a few of the questions swirling around in Alicia's head. (Also, Alicia's clearly dealing with depression, and it would be really cool if the writers would explore that angle — but I digress.) Alicia is conflicted right now, to say the least.

As Alicia walks to a nearby restaurant to ostensibly meet Daniel, a handsome man who she met at jury duty, for a drink, she gets a phone call from Finn. Finn remarks that Eli Gold, who is now helping Finn with his campaign for State’s Attorney, just wants to “turn him into a hero.” Alicia laughs and says, “Yes, Eli is good at that.” Finn responds, “That’s right — he already turned you into a saint.” Wow. Is Finn the first person to truly understand what Alicia has gone through trying to live up to the ridiculous “good wife” image?

I mean, obviously, that’s sort of the whole concept behind the show — ever since Peter’s corruption and prostitution scandal, Eli has worked tirelessly to turn Alicia into “the good wife”: the woman who “stands by her man,” no matter what. Of course, throughout the series, Alicia has attempted to match this ridiculous image, eventually learning that it’s not only an impossible endeavor, it’s a stupid one. I just can’t recall any other character on the show ever really understanding that struggle. But it looks like Finn does. Sigh. He's so awesome.

As Alicia stands outside the restaurant, debating whether or not she should go in, she asks herself, “It’s one drink, why is that a problem? Who are you being faithful to?” She ponders these questions for a moment and then walks away, deciding not to go inside. Alicia is working through some pretty tough issues right now — maybe Finn can help! Again, it doesn’t have to be a love connection, exactly, just a human connection. Gosh, somebody stop me before I start working on an Alicia/Finn fan site in my spare time. Does Geocities still exist?

Next week: Eli asks Alicia, “Are you sleeping with Finn Polmar?” I don't know...is she?? *faints*