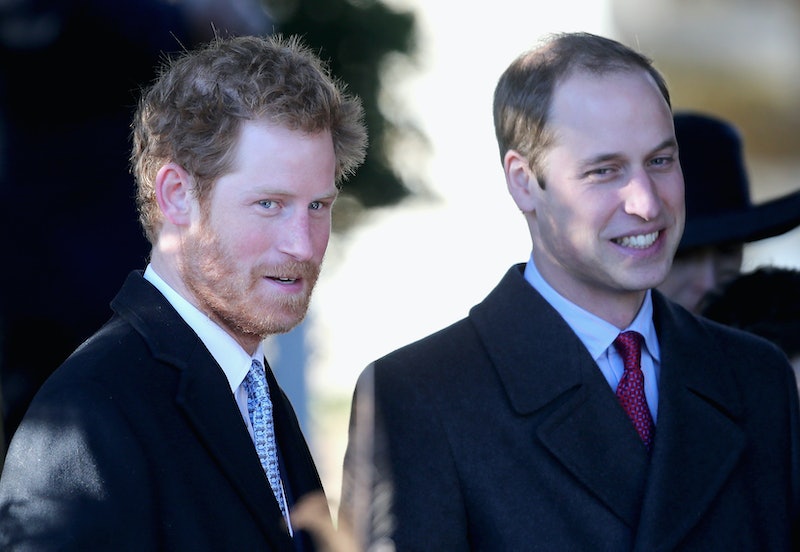 You've probably never pondered the possibility of royal twerking — and if you have, you are one special person — but now this odd event has become a reality. Reportedly, Prince Harry twerked at a wedding in Memphis on Saturday. Unfortunately for us, there is no video of Harry's supposed twerking available because this isn't Miley Cyrus. You can't just head over to Prince Harry's Instagram and watch video after self-posted video of Harry's twerking skills. On the bright side, the wedding's bandleader was willing to give a ton of quotes to The Telegraph and it sounds like Prince "The Boring One" William got down at the wedding as well.

Sources who attended the wedding said Harry "twerked" on the dance floor and described the night as "wild and crazy," but it was bandleader Jimmy Church who was really shocked. Church told The Telegraph,

The whole thing was unreal man. William came up on stage in his coat, and me and him were going back and forth doing 'Shout' and then he did it on his own. I was getting down, he was getting down, it was wild man. He was great, he just got the music.

He "got the music?" That's shocking after seeing the video of him attempting to DJ in Australia. Maybe the pressure of the cameras was too much and his true prowess comes out only when he's 100 percent comfortable. Or 100 percent drunk on good old American bourbon.

They were holding people up in the air and passing them around like they were flying. I've been doing this 50 years and I ain't ever seen anything like this. These guys know how to party. Harry was dancing and having fun, dancing with lots of people. There were lots of girls around him but I didn't see that he was with anyone. He was actually a little more conservative than William.

I love how he makes it sound like William and Harry were literally just holding people themselves and running around. I'm pretty sure the phenomenon he's describing is crowdsurfing.

As of now — and probably forever because the royals know how to keep things private — the only proof of Harry's twerking and Williams singing comes from a guy who might just be trying to get hired for future weddings. It's probably best if we all choose to believe him though. The mental image of Harry twerking to his brother singing "Shout" is too good to deny.

More like this
An 'Emily In Paris' Fave Is Joining Season 5 Of 'The Crown'
By Bustle Editors
Kanye Joked About His Divorce To Kim K In A Surprise Speech At The BET Awards
By Alyssa Lapid
What Is Ariana Grande's Net Worth? When It Comes To Money, She Has No “Problem”
By Hugh McIntyre
Lily Allen Was “Quite Emosh” After Performing Sober At Glastonbury Festival
By Stephanie Topacio Long
Get Even More From Bustle — Sign Up For The Newsletter