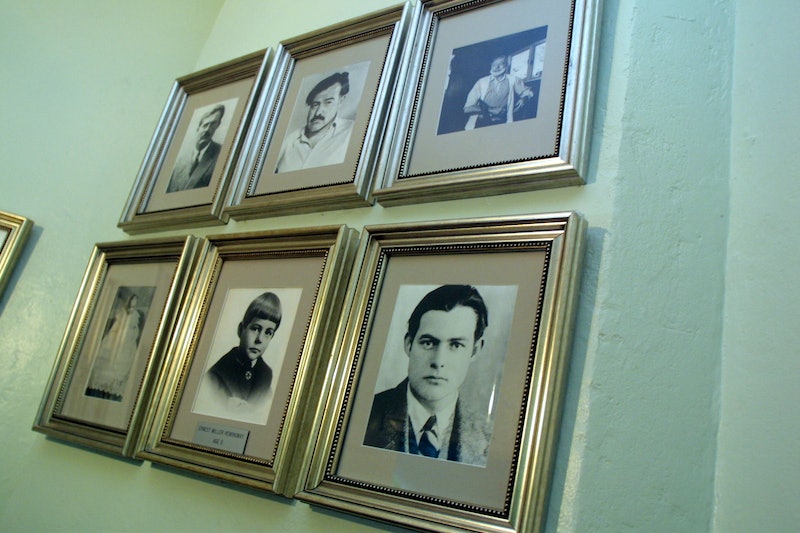 Ever wanted to write like Hemingway? If you're a writer in America, chances are you have at some point. Hemingway is famous for his terse, economical style, which was just as much a part of his macho persona as his scenes featuring bullfighting or his love of hunting. A real writer — a real manly writer — doesn't need all those girly adverbs and long, feminine sentences. And if you do want to emulate the late, great Ernest Hemingway's prose, there's an app that can help, cleverly titled "Hemingway App." Just in put your text and the app will break down how well your text compares to Hemingway standards, highlighting your tricky sentences and marking your uses of adverbs and passive voice.

Sounds great, huh? I was curious to see the app take on some literary greats, so I inputed seven writers' opening paragraphs to put them to the Hemingway test. Here's how they did.

First up is Hemingway himself with the opening paragraph from the book that was the bane of my senior English class, The Sun Also Rises. So how good is Hemingway at writing like Hemingway?

Well, not bad. He's still within what the app considers "good." But over a quarter of his sentences have been flagged as either hard or very hard to read, and his adverbs need to be reined in big time.

Maybe try another book. How about Old Man and the Sea. I actually kind of liked that one.

There! That's much better. The only thing the app flags here is a few uses of passive voice that are well within acceptable Hemingway limits.

So now that we have our baseline, let's see how some other authors (ones I don't mind telling you I like a good deal better) fare when compared to Hemingway.

Okay, so the opening of Persuasion is only two sentences, but one of them is a very long, very excellent sentence. So even though the Hemingway App ranks the paragraph as "Bad," I think that says more about the app than Jane Austen.

Louise Erdrich has written more than a dozen novels, her most recent (and probably best yet) is The Roundhouse. The good folks over at the National Book Foundation gave her the award for fiction in 2012. Let's see what the Hemingway app thinks of its opening.

Just "Okay," Hemingway app? Tsk, tsk. Though I suppose she has fewer "hard to read" sentences than Hemingway's own Sun Also Rises does. Still, I don't think anything in that paragraph was hard to read.

One of the great American writers of the turn of 20th century, Wharton actually lived long enough to see Hemingway himself rise to prominence — in fact, he was even a guest at one of her famous salons. What the two might have thought of each other's writing remains a mystery lost to the ages, but we can find out what the Hemingway app makes of Wharton's opening to her Pulitzer Prize winner Age of Innocence.

Well it seems that even though Wharton does well when it come to conforming to Hemingway standards for adverbs, long words, and passive voice, her sentences are just to intricate for the app's liking. Well, even Hemingway got flagged for that.

This Canadian Nobel Prize winner writes short stories instead of novels, but don't ever think that means she's not a serious writer. Munro can blow anyone away any day of the week. So let's see if the opening paragraph of the first story in her latest collection, Dear Life, can blow away the Hemingway app.

Well would you look at that! Munro actually outscores Hemingway himself, at least in comparison to The Sun Also Rises. The app is a little concerned about two of her sentences, but still thinks she rates well within the "Good" range.

Though Emily's sister Charlotte gets all the attention for her novel Jane Eyre, every literary geek worth her salt knows that Wuthering Heights is by far superior. In fact, I once had a professor declare it to be one of the most subversive novels ever written in English. Whether or not you believe it (or think Jane Eyre is better — I'm not here to start any lit wars), let's see how the Hemingway App ranks its opening paragraph.

Well, it may be subversive, but it isn't quite up to Hemingway standards of clarity, I guess. The app rates this opening as just "Okay."

Zora Neale Hurston was almost lost to history, which would have been a tragedy, but fortunately Alice Walker brought her back to the public consciousness decades after Hurston was buried in her unmarked grave. Her writing was affirming, illuminating, and just plain beautiful — now let's see if the Hemingway app agrees.

The opening to Their Eyes Were Watching God is short but sweet, just like Hemingway would have liked. And it seems it meets with the app's approval. In fact, this opening does almost as well as the opening to The Old Man and the Sea. Yay!

In the end, this app really isn't some sort of arbiter of what's good writing and what isn't. After all, "how much are you like Hemingway" is not the ultimate rubric for judging literature — and if everyone in the world were writing like Hemingway, I personally would hate it. But for writers looking to hone their craft, it can be a useful tool for helping you think about your own writing, especially if you are going for a simpler style. That and it's fun. Even I couldn't resist putting some of my own writing in. And so I give you: the opening paragraph of this article.

Guess I might have some work to do, too.