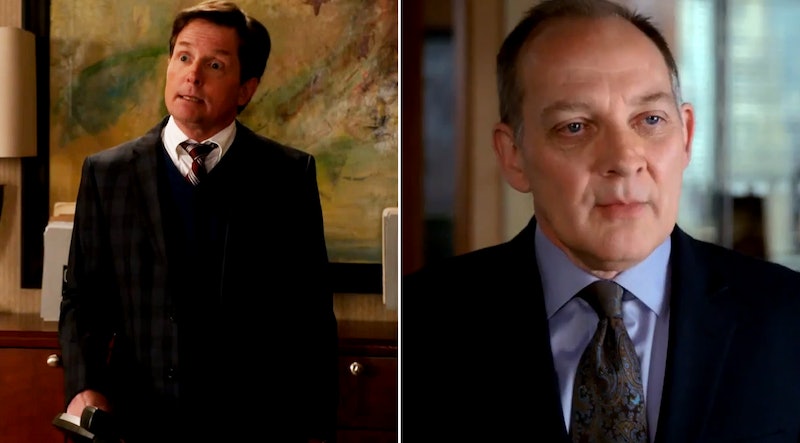 On “The Deep Web,” Sunday night’s new episode of The Good Wife , viewers learned that Michael J. Fox’s character Louis Canning only has 12 months to live. I almost started to feel sorry for him — that is, until we found out that Canning's working with sneaky divorce attorney David Lee to try to push Diane Lockhart out of Lockhart/Gardner. That’s right, even though Canning knows that his days are numbered, he’s still trying to screw over Diane — but why? Shouldn’t Canning be putting all of his time and energy into organizing his affairs and living his final days to the fullest? Just what are Canning and Lee plotting?

In “The Deep Web,” Diane discovers that her receptionist has been forwarding her client’s calls on to Canning and Lee without her permission. She immediately fires her receptionist, prompting Lee to confront Diane and say that he was just trying to be helpful. According to Lee, since Will Gardner’s death, Diane has become forgetful and frequently absent from the office — and her clients had noticed. Initially, it seems like a plausible scenario. After all, Diane has been going through a lot lately, but Good Wife fans know that all of Lee’s moves around the Lockhart/Gardner office are carefully calculated — he doesn’t do anything just to be nice.

Eventually, Diane confronts both Canning and Lee, with investigator Kalinda Sharma revealing that she knows that the two men have been meeting together frequently outside of office hours. At this point, Canning reveals that he only has 12 months to live and that he and Lee have actually been estate planning this entire time. At first, Diane believes Canning — but then he says that he's not looking for pity, and that's a major red flag. That’s not the Canning we’ve come to know: Canning loves attention. Kalinda continues her investigation and comes up with some shocking news at the end of the episode: Canning is really dying, but he’s still trying to screw Diane over.

The way I see it, there are really only two possible scenarios here: either Canning is motivated by money, or he just really, really dislikes Diane. How does Canning stand to benefit monetarily if Diane is voted out as a partner at Lockhart/Gardner? I’m not exactly sure. With one less managing partner on the payroll, maybe Canning knows that he will get a raise and has promised to kick back some of the cash to Lee. Maybe Canning just wants to ensure that his wife and kids are properly taken care of when he’s gone (though I imagine they are already quite wealthy). Or maybe he’s just super greedy. I think there’s a fairly good chance that Canning and Lee are looking to score an extra payday.

It’s also possible that Canning just really hates Diane. Fortunately (I guess?), the feeling is mutual. During “All Tapped Out,” Diane called Canning “the devil” — and she didn't appear to be joking. Damn. If there is a more damning insult, I do not know it. I could probably come up with a few more creative, more hilarious insults, but calling someone the devil is pretty high up there in terms of seriousness. Perhaps Canning’s dislike for Diane has grown so strong, he’s willing to do whatever it takes to knock her down a peg, even if it means spending his last moments on this earth plotting against her. I don't know. Sure, the two lawyers have argued against each other in court on a number of occasions, but I guess I would find it hard to believe that Canning harbors that level of hatred for Diane.

If I were a betting man (and I’m not), I would bet money that Canning and Lee are trying to earn a little extra cash by pushing Diane out of Lockhart/Gardner. I’m looking forward to finding out more about their scheme during Season 5’s final two episodes. I guess it’s true what they say: RATS of a feather do flock together. Well, I say that, anyway.