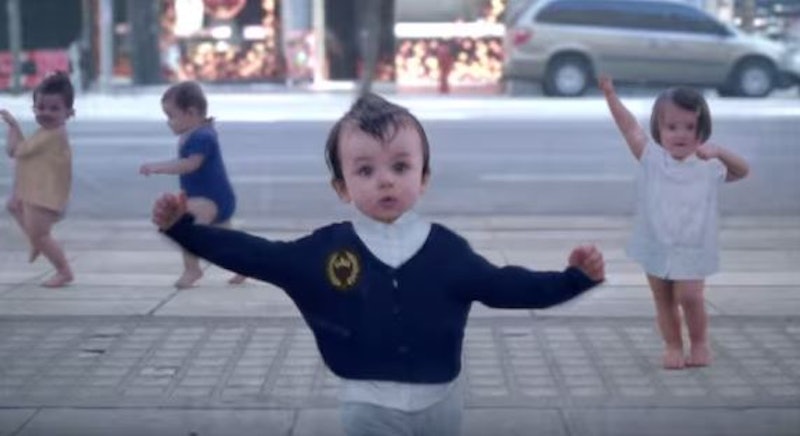 You guys. This ad? Might just be one of the greatest ads of all time. Seriously. I’ll admit that I tend to get suckered in by good commercials pretty easily, but this Evian "Baby & Me” one for Evian is totally worth the minute and 15 seconds it takes to watch. It’s not a new ad — according to YouTube, the video was first uploaded a little more than a year ago — but it’s making the rounds again, and with good reason. Why? Because it is absolutely delightful.

It all starts when one guy walks by a reflective surface. Why is a mirrored wall just hanging out in the street? Don’t know, don’t care. Because what happens next is adorable:

I don’t know about you guys, but the baby with the ‘stache gets my vote for Best Baby in the History of Advertising. Sorry, E-Trade Baby.

At first, I wasn’t really sure what exactly it was that made the folks behind this commercial think, “Evian? I know! BABIES!” — but then I spotted this comment:

Evian is the Fountain of Youth… in a bottle. Genius? Just a little bit. But even if I never figured out the whole Fountain of Youth connection, I probably wouldn’t have cared. The video is just. That. Fun. As this guy said:

Oh, and guess what? This isn’t the only Baby & Me ad they’ve done. The most recent was released in April in preparation for The Amazing Spider-Man 2, and, well… just watch it:

True, this one clearly relies on CGI a lot more than the other one does (although I'm sure there's a lot of it at play there, too) — but YOU GUYS. BABY SPIDER-MAN. Augh, I can’t stand it. Too stinkin’ cute.

When the Spider-Man spot came out, Adweek called Evian’s various baby ads “creepy,” but I think that’s being overly cynical. You know what? I like embracing my inner child. What’s the point of being a grownup if you can’t be a kid every now and again? And no, the ads probably won’t make me buy more Evian. But I can appreciate some clever advertising when I see it — and if laughter is the new meditation, then I’m going to giggle my way to enlightenment. So there.