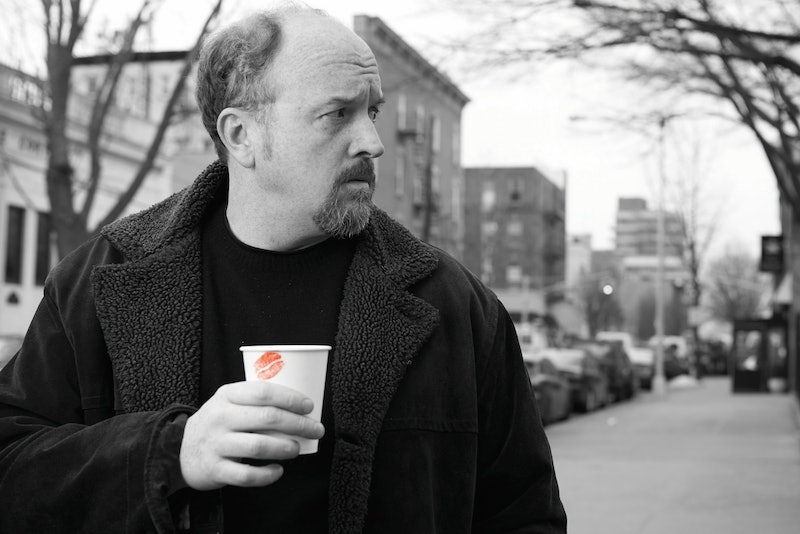 With an excruciating year and a half between the third season of FX's ridiculously acclaimed show and the Season 4 premiere of Louie, we were bound to expect greatness. After all, the reason creator/producer/writer/star (and hell, probably the guy who gets everyone coffee on set — he's just that hands on) Louis C.K. delayed the fourth season was because he wanted to make sure he had time to make it good. And right on cue, he ignored our impatient demands for more right now please, took his time to deliver the product we always knew he would: yet another fantastic season of Louie.

But as I was sitting through the first few episodes FX has so graciously bestowed upon critics, I couldn't help but feel as if Louie had gained something during his sabbatical. The series seems to have a heightened attention to detail and a far better understanding when it comes to women. In a literal sense, Louie literally places his hand on his chest and declares "I really love women," at one point, but in a more general sense, it seems this series is attempting to right some past wrongs.

In the past, Louie hasn't exactly stomped all over women — we'll leave that honor to most things produced by Chuck Lorre — but he hasn't exactly given them the best slice of representation in his hyperrealistic New York City landscape. Season 3 alone was a parade of borderline psychotic women (and the previous seasons weren't entirely better), many of whom could very easily earn the term "harpy" by virtue of their only characteristics being anger and unpleasantness (Roman mythology wasn't so nice to the ladies either, as it were).

There was Melissa Leo's character (above), who lured an unsuspecting Louie into her truck only to become downright violent and nasty when she demanded he go down on her. There's the mother from his daughters' school, who loses her mind on Louie when he agrees to help her out with an Ikea trip (to be fair, no one is pleasant after shopping at Ikea). There's even Maria Bamford, playing a cold version of herself as Louie's friend-with-benefits who denies him the affection he craves while telling him he's "bad at sex." And while Parker Posey's almost etherial Louie-Pixie-Dream-Girl was an integral part of Season 3's heart-breaking conclusion, she often veered into cartoonish territory.

This season, there's still an element of that blind spot — Yvonne Strahovski (below) stops by to play an unforgettable and slightly manic (pixie implied) part in Louie's Season 4 trajectory — but for the most part, Season 4 has a definite air of change. The season opens with a host of moments focusing on the women (and future women) in the series.

As Louie's season progresses, we see varying depictions of women that won't make us cringe (well, not for the wrong reasons, anyway) including one self-identified "fat girl" who gives an almost painfully honest monolog about what it's really like to be a young, fat woman in an image-obsessed world.

Of course, Louie is still about the comedian at its center, so no matter how many times he diverges from the main route to visit other characters, we'll always come back to how it affects Louie — after all, it's the general conceit of the show. But in Season 4, it appears we're finally getting the one piece we were missing in past seasons: Women characters who don't make us feel absolutely awful about being women.

More like this
Everything We Know About Jerry Seinfeld's Pop-Tart Movie
By Radhika Menon
40 Cheap Products That Save You A Surprising Amount Of Money
By Rebecca Martinson
Adele’s All-Female Lineup Includes Kacey Musgraves, Mahalia, & Self Esteem
By Shahed Ezaydi
Here's Why You'll See Less Of Olivia Rodrigo In 'HSMTMTS' Season 3
By Bustle Editors
Get Even More From Bustle — Sign Up For The Newsletter