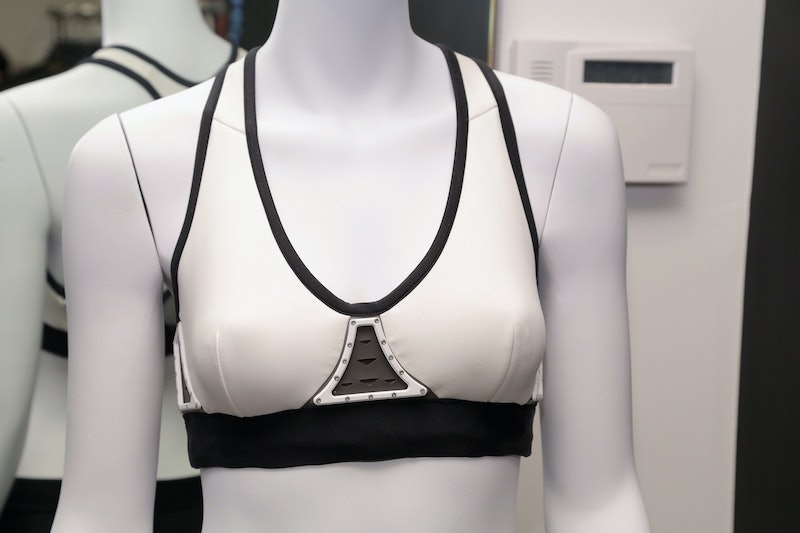 As we all know, having big boobs is a blessing and a curse. After years of being thoroughly annoyed by my boobs, I think we’ve pretty much come to an agreement to get along. Any time I decide to get active, though, my hatred for my double-D cups comes back with a vengance. And then I usually decide to go have a margarita instead.

But it looks as if there might finally be a solution! Did you know that instead of just wearing one sports bra, you could wear two sports bras? Brought to us by the fine people of CollegeHumor.com, this incredible “commercial” advertises a new take on a brand new “product” that many of us have been using for years.

Sports bras are seriously the worst. They either strangle your boobs into sweaty submission, or let them bounce so hard that you wonder if they’re going to fly over your shoulder at any minute. They also chafe in weird, uncomfortable places, and generally make your boobs look like flapjacks. There has to be a better way.

My favorite line of this hilarious video is “if dudes had boobs, we would have figured this out already.” Because that is the truth. Even women who don’t have huge knockers struggle to find sports bras that fit, despite there being thousands of different options on the market. So, we just cut our losses and choose something that, as the actress says, isn’t completely uncomfortable and make do.

Apparently, it’s also bad to wear two sports bras. Ligaments that support the breasts, called Cooper’s Ligaments, are either stretched or compressed by ill-fitting bras, which leads to increased boob sagging. But it’s probably better to wear two sports bras than run through the park with your hands covering your boobs to keep them from hitting you in the face.

More like this
What’s The Kibbe Body Type Test That’s All Over TikTok?
By Marilyn La Jeunesse
17 Genius Things You Can Do With Old Clothes That You Can't Donate
By Brittany Bennett and Dominique Norman
Bustle Newsletter: May 6, 2022
By Stephanie Talmadge
Meghan Markle’s Favourite Skincare Brand Has Finally Landed In The UK
By Tomi Otekunrin
Get Even More From Bustle — Sign Up For The Newsletter