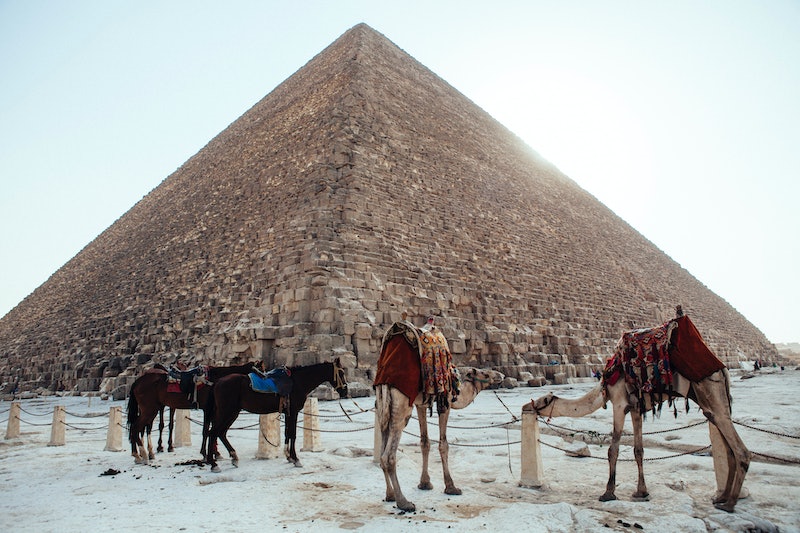 We all remember the science class in which our teacher revealed no-one had any idea how Ancient Egyptians moved the gigantic stones used to construct the great pyramids. It was a real mystery! We were confronted with the finite nature of time and our own mortality! What if we wanted to tell someone about something in a hundred years? Well, children have officially been denied that existential whopper of a developmental moment, because physicists from the University of Amsterdam have discovered a pyramid-making method which these stone movers very likely used.

In an article published in the journal Physical Review Letters , the authors write that "some — but not too much — water" is the key to their findings. In order to pull giant sledges which carried the pyramid stones, the Egyptians would dampen the sand in front of the sledge's path. This dampening, the article states, greatly reduced friction by forming capillary bridges between each grain of sand.

So how did the researchers, led by Professor Daniel Bonn of the Van der Waals-Zeeman Institute, choose this method from of the seeming infinite vastness of possibility? From the ancient Egyptians themselves, obviously. The researchers were aware of a painting on the wall of the ancient tomb of Djehutihotep, dated around 1900 B.C., which depicts 172 men pulling an enormous statue on a sledge with ropes. Also depicted is one person standing nearby pouring water over the sand.

While Egyptologists thought the pouring might have been a ceremonial act, Dr. Bonn and his team thought differently… what if it was a matter of friction reduction?

The group of researchers constructed miniature sledges and pulled them through sand of varying levels of wetness. Dry sand would form clumps, making it nearly impossible to keep pulling. Very wet sand was too muddy. Kind of wet sand was just right.

In an interview with LiveScience, Bonn said of his findings: "It turns out that wetting Egyptian desert sand can reduce the friction by quite a bit, which implies you need only half of the people to pull a sledge on wet sand, compared to dry sand."

While there is no way to prove that this is, without a doubt, the method that ancient Egyptians used to transport heavy stones used to construct the pyramids, it is certainly compelling. The research, which is part of a program examining fundamental aspects of friction, could also have important implications for transporting and processing other granular materials such as asphalt and coal.

So, when you are working on your cave paintings, make sure to EXPLICITLY CONVEY WHAT YOU MEAN TO CONVEY. For the psychological wellbeing of the millions of lower-schoolers to come.

More like this
'Who Killed Sara?' Won’t Return For Season 4
By Brad Witter
Michigan’s Governor Is “Going To Fight Like Hell” To Protect Abortion Access
By Andrea Zelinski
Rebekah Vardy & Coleen Rooney’s Trial Has Officially Begun
By Bustle UK
Twitter Was Saying The Same Thing About Sam Ryder’s Surprising Eurovision Result
By El Hunt
Get Even More From Bustle — Sign Up For The Newsletter