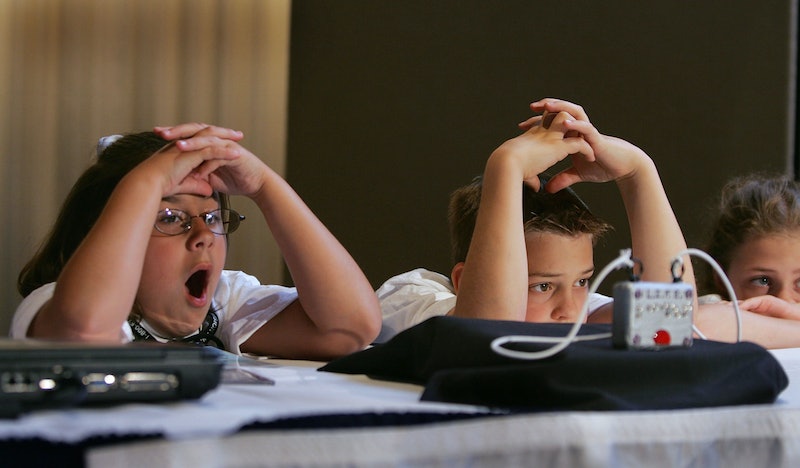 When you were a kid, you were serious, studious — okay, let’s be straight-up here, you were a nerd. Your days were about whatever school subject obsessed you; your afternoons were about non-stop extra-curricular enrichment classes; and your weekends were about feeling subtly alienated from your peers. I mean, you weren’t a total outcast — you had friends and hobbies (wait, does practicing piano for two hours every night while your mom makes judgmental faces at you count as a hobby?). But you never felt quite “in step” with the rest of the kids at your middle school.

That was, until those three sacred weeks each summer, when you got to travel to the nerdiest place on earth — academic summer camp. Whether you attended a national chain like CTY or TIP, or a regional camp based out of your local university, your summers were all about doing the things you loved: studying Dante, or physics, or the fundamentals of microeconomics; meeting and bonding with fellow nerds from far and wide; and staying indoors (I burn easily, okay? Also, I have a note from my mom that says I’m allergic to outside).

And whether you grew up out to be a Nobel Prize-winning scientist, the founder of Facebook, or an internet writer (ahem), you continue to cherish those memories of academic camp. Memories like…

THE JOY OF NOT HAVING TO PLAY SPORTS

For this brief, magical window of time each year, no one yelled at your for walking the mile when you should have been running, no one tried to make you take your t-shirt off when you swam, and everyone understood that the President’s Physical Fitness Test was a sham of a mockery of a sham. It was bliss.

Since academic camps were almost always held on college campuses, you got to live in the dorms and basically pretend you were already there. Gross cafeteria food! Temperamental thermostats! Industrial carpeting everywhere! All the things that would annoy you in a few years were just so new, so wonderful, so grown-up then. Which reminds me…

THE JOYS OF PRETENDING TO BE A MATURE INTELLECTUAL

Even if it turned out that you actually understood, like, maybe a third of what you read in any of your classes.

You got your first taste of the stuff in the cafeteria and you were instantly hooked for life.

BEING INTRODUCED TO THE MUSIC OF THEY MIGHT BE GIANTS

THE JOY OF ENGAGING IN FLAGRANT MISUSE OF COLLEGE FACILITIES

They built that giant concrete public art sculpture in the middle of the quad so that you and your hallmates could crawl inside and scream swear words, right?

Who are these barbarians who drink so much Miller Lite??? (You in 5 years, but never mind that.)

HAVING YOUR MIND BLOWN BY THE TRIPS INTO TOWN

Since almost all academic summer camps were held at colleges, almost all trips into town were to college towns, which may have been your first exposure to stores that sold vintage clothing, used books, and devices “for tobacco smoking purposes only.”

HAVING YOUR FIRST KISS OUT BEHIND A SCIENCE LAB

Or outside a college library. Or just after a lecture by Joyce Carol Oates. The point is, learning has made you feel all tingly ever since.

DID I MENTION THE PART ABOUT HOW NO ONE MADE YOU PLAY SPORTS?

BEING STRONG-ARMED BY THE COUNSELORS INTO DOING “FUN” THINGS, LIKE GOING TO CAMP DANCES…

But once they got you there and you got a nice little Sprite-based sugar rush going, there was no stopping you.

COMING BACK WITH AN UNUSUAL NEW HOBBY

Like building your own didgeridoos, or bee-keeping, or building historically accurate model ships. You forgot about it about a week after you got back home.

KNOWING THAT YOU WERE IN IMPRESSIVE COMPANY

Lady Gaga went to academic summer camp! Also, like, some computer scientists or whatever.

...BUT THAT YOU WERE STILL JUST A BUNCH OF GOOFY KIDS

Let's just say, you made a hell of mess in the cafeteria for a group of people who were proud of being able to pronounce "Nietzsche" correctly.

Like, that no one’s an actual weirdo—you've just gotta go out and find your tribe.