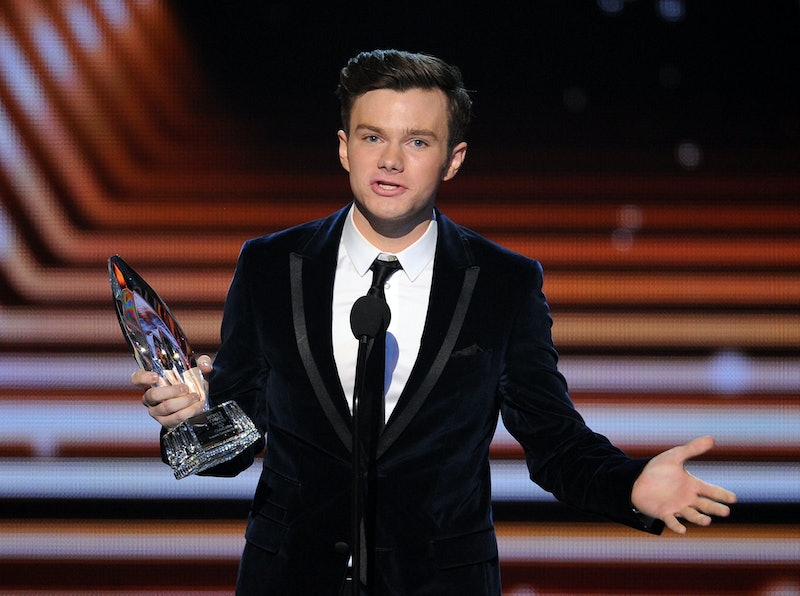 We shouldn't have been surprised when Glee 's Chris Colfer was asked by producers to write an episode of his own show, even if he says he was surprised. The actor has lately been tackling more than just his role as effete glee clubber Kurt Hummel (the role he won a Golden Globe for in 2011): He's become a full-fledged writer. Books, movies, and now television... Colfer's done it all. Let's take a look at his former projects to get pumped for his episode, airing Tuesday, called "Old Dogs, New Tricks."

Colfer's first foray into writing was this high school comedy, which he also starred in. Lightning , which premiered at the Tribeca Film Festival in April of 2012, told the story of ambitious student Carson who, after being killed by a random lightning bolt, reflects on his high school experiences. Colfer assembled a stellar cast for his first writing project: Allison Janney (The West Wing), Christina Hendricks (Mad Men), Dermot Mulroney (Crisis), Sarah Hyland (Modern Family), and Rebel Wilson (Super Fun Night) all played supporting roles. The film was enjoyed a somewhat lukewarm reception, although even its harshest critics admitted that the dialogue was witty and the cast, including Colfer, all gave strong performances.

The Land of Stories: The Wishing Spell

In 2011, Colfer was granted a two-book publishing deal by Little, Brown Books for Young Readers. The Wishing Spell , the first book in this deal, was published in July of 2012. In it, twins Alex and Conner fall into a fairy tale world full of witches, wolves, and goblins. It spent five weeks on the New York Times Bestseller List in the Children's Chapter Books category, and was named one of Barnes & Noble's Best Books of 2012.

The Land of Stories: The Enchantress Returns

The second book in Colfer's deal was released in August of 2013. The Enchantress Returns also spent time on the NYT Bestseller List, and due to its success, Little Brown extended Colfer's deal to include at least three more sequels in his Land of Stories series.

In Colfer's television writing debut, "Santana helps Rachel do damage control for her flagging public image; Kurt tries to help a home for retired Broadway performers with their production of Peter Pan; to prove he is responsible, Sam adopts a dog — despite Mercedes’ objections."

The Land of Stories: A Grimm Warning

The third book in Colfer's Land of Stories series is due out in July of this year.

Colfer also adapted Florence Laughlin's children book The Little Leftover Witch into a television pilot, which he successfully sold to the Disney Channel back in 2011. However, the project was delayed for unknown reasons and has yet to secure a release date. Hopefully, Colfer's recent successes in the world of writing will inspire Disney to revive the Leftover Witch and this hidden gem will get to see the light of day.

More like this
Jane Lynch Revealed Why She’s Leaving 'Funny Girl' After Lea Michele Was Cast
By Grace Wehniainen
The Biggest Differences Between 'Bullet Train' & The Book It’s Based On
By Arya Roshanian
'The Simpsons' Will *Finally* Address How They “Predict The Future”
By Sam Ramsden
10 Must-Read New Books Out This Week
By K.W. Colyard
Get Even More From Bustle — Sign Up For The Newsletter