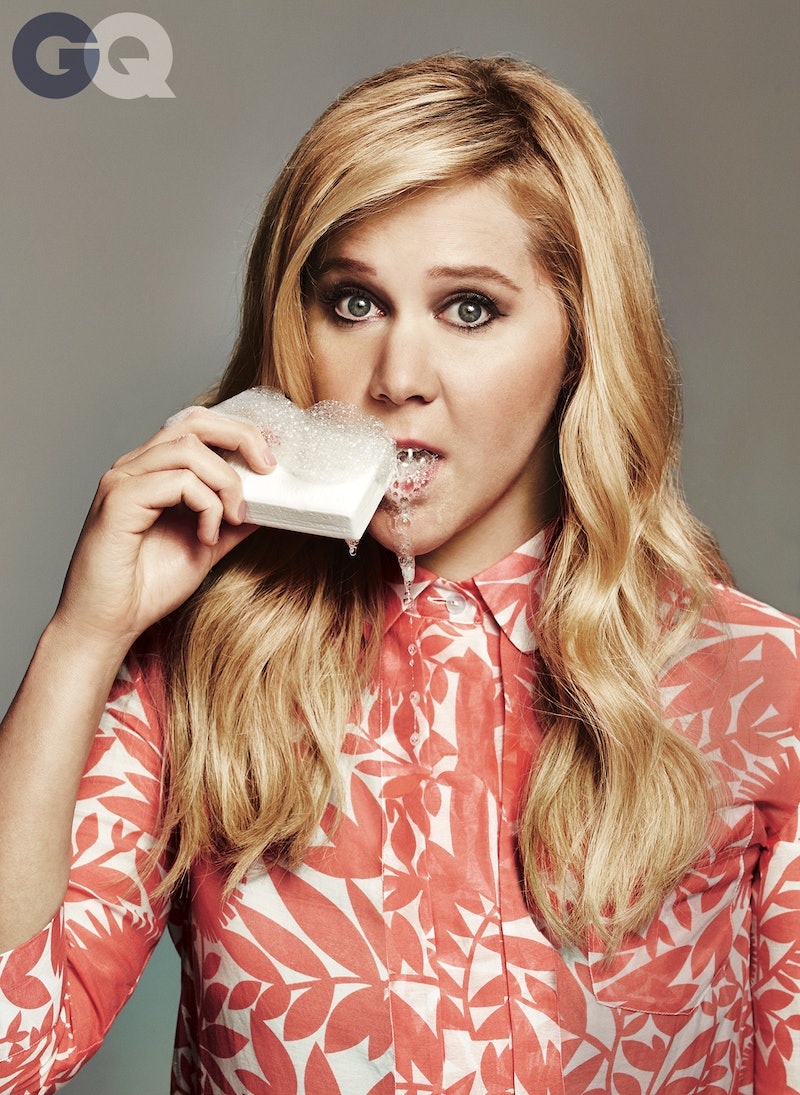 You know that this lady is awesome, but now GQ has said the Amy Schumer is one of the funniest people alive, and wow, I couldn't agree more. Schumer is easily one of the ballsiest ladies in comedy and if her kick-ass speech on self worth at the Ms. Foundation Gala didn't make you a fan, Lauren Bans's profile in GQ will give you all the reasons you need to believe that Schumer deserves to be at the top of the comedy world.

Though GQ affectionately says she's "The Biggest Potty Mouth In America," she's more than just a dirty mouth attached to a pretty face. (That said, I might wager that Schumer is 60 percent responsible for the recent trend in jocularly calling people c*nts. The remaining 40 percent belongs to The Hound on Game of Thrones.)

Anyway, here's why Schumer deserves this honor. Yes, she's hilarious — of course —but being supremely funny means more than just getting folks to LOL.

She went from a not very easy childhood — a bankrupt dad, parents who split — to doing standup, to doing roasts, to getting noticed, to getting a her own show. She said:

There's been no shortage of trauma in my life.

And it's not like she was an overnight success, either; she has worked hard to be where she is now, and it's a refreshing to hear that a woman fighting in the man's world of comedy can make it to the top with perseverance and talent.

2. Her Humor, Foul As It May Be, Has A Political Undertone

In the interview, she discusses working on a sketch that involves a woman playing a video game as a female soldier in which a male military soldier attacks her. Yup, you got it — she's talking about how ladies struggle to report assault.

3. If She's Going to Offend, She'll Go All The Way

Regarding that assault sketch, she says:

If we are going to go for the joke [...] let's really go for it and not apologize for it.

4. She's Funny, But Won't Do Anything For A Laugh — Like Get Air-Fucked

Jerry Lewis attempted to do that schtick on her at — miming penetration — and she didn't go for it. She'll take the laughs, but not the pseudo-dick, thankyouverymuch. She says:

I'm not going to be the girl who gets fucked after her set [...] Sorry, Jerry Lewis.

5. Her Humor Is Observant And Honest

The great thing about Amy [...] is that she's honest—to a fault.

Isn't that the best kind of humor? A joke that's saying something unfortunate and true (ie: a woman can't report an assault without feeling uncomfortable about it) is as poignant as it is funny.

7. She's a Feminist And Still Sexual

She can talk about her lady-parts and still have sketches that hit home for women. Enough of this pseduo-feminist comedy that acts like a dried up raisin with zero sexuality. Women can expresse their views on gender equality while still saying the word "pussy." The end.

8. She's Good At Separating Her Stage And Actual Self

The guys who actually know me [...] know that it's really pretty hard to fuck me.

That's a pretty great take-away message for women who like talking about sex but don't want to do it with everybody with a penis. Hello! You can talk about sex and not be promiscuous.

9. She Was Bat Mitzvahed At Medieval Times

Okay, maybe I just thought that was super cool. But c'mon — how awesome is that? "Funniest person in the world: Bat Mitzvahed at Medieval Times!" Hey, it just means that...

Which is, in part, why her show hits so well. We all can relate to this sketch about girl-on-girl compliment crime, and it's an important, cringeworthy mirror that also happens to be hilarious. It's Schumer at her best.

Thanks, Amy Schumer. So glad you're in the spotlight now, where you belong.