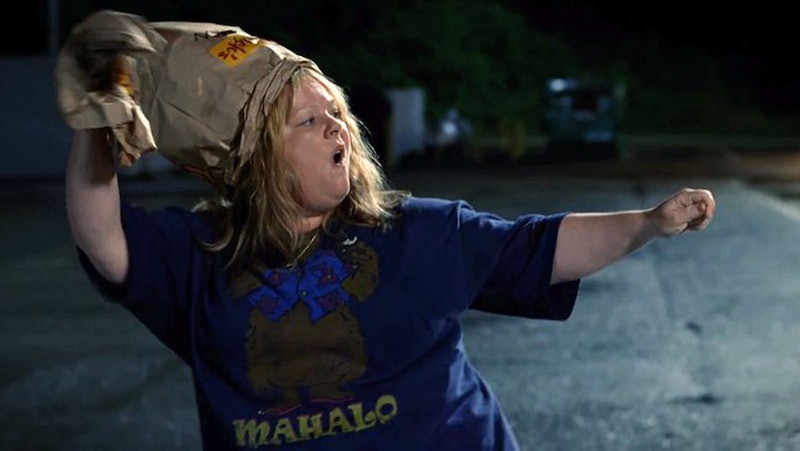 The best kinds of summer movies tend to involve road trips, feminism, or Melissa McCarthy, so Tammy , a comedy that combines all three of those things, is pretty much guaranteed to be incredible. The film, directed by Ben Falcone, stars McCarthy and Susan Sarandon as family members on a road trip, and its first trailer, released back in February, looked every bit as good as one would expect from such a comedy dream team. Still, the abundance of weight-related gags made some viewers worry that in the McCarthy canon, Tammy would be more Identity Thief, less Bridesmaids. Thankfully, though, the premiere of the second Tammy trailer on Tuesday quelled our fears, and somehow raised our expectations for the movie even higher than they already were.

The two-minute trailer shares a few similar scenes with the first clip from the film, but quickly branches out, showing the relationship between McCarthy and Sarandon's characters and bringing supporting cast members Mark Duplass, Kathy Bates, and Sandra Oh in view. There's jokes about jet skiing, alcohol, and the difference between Neil and Lance Armstrong, but, except for a repeat scene of her attempting to climb a counter from the first trailer, none that revolve around McCarthy's weight. Mostly, the clip just shows off the actors' perfect comedic timing, as well as Sarandon's unfortunate haircut. There's no sign of Allison Janney, Toni Collette, Nat Faxon or Dan Aykroyd (seriously, what comedians aren't in this movie?), but we're not too concerned; knowing McCarthy and Falcone, Tammy will feature all the actors we love making complete and utter fools of themselves. Can July 2 come sooner?

Check out the Tammy trailer below: