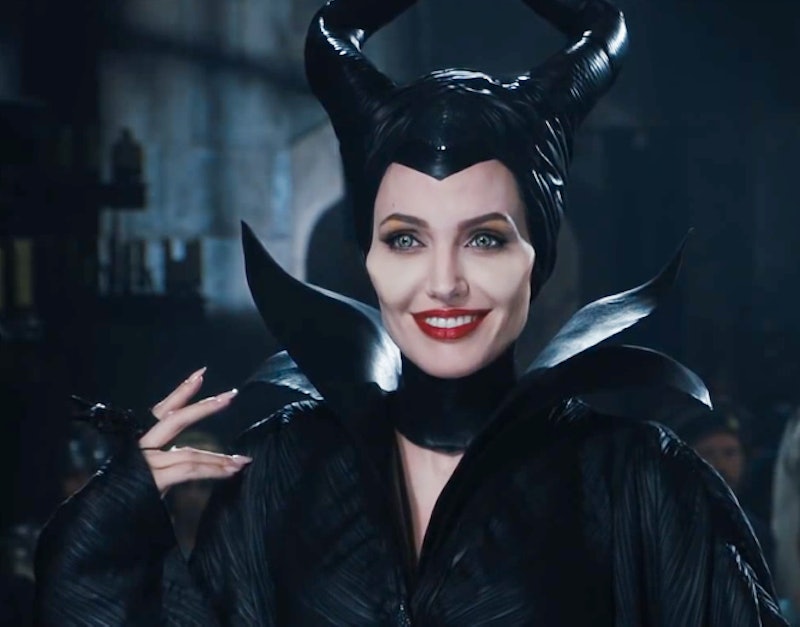 Disney’s much-anticipated fractured fairy tale Maleficent hits theaters on May 30, and I couldn’t be more excited. The cheek bones, the horns, the dramatic red lip! I can’t wait to watch Angelina Jolie as Maleficent storm around that castle in her fierce black cape, chewing scenery and cackling like crazy person. Judging by what we’ve seen of the movie so far, this is the role Jolie was born to play.

While most of the hype surrounding Maleficent has been focused on Jolie’s stunning interpretation of the evil (err, complicated) fairy, not nearly enough attention has been paid to the film’s fascinating supporting characters — like Diaval, Maleficent’s mysterious assistant and confidant. Fans got their first good look at Diaval on Monday via a series of new Maleficent character posters. Diaval, played by English actor Sam Riley, is barely featured in the film’s trailers (in his human form, anyway), so I can understand why he’s been overlooked. But it’s time to change that, because aside from the leading lady herself, the shape-shifting Diaval might just be Maleficent's coolest character.

Here is everything you need to know about Maleficent’s Diaval and actor Sam Riley.

Riley is a 34-year-old English actor and singer, best known for his roles in 2007’s Control, a biopic about punk band Joy Division’s lead singer Ian Curtis, and 2012’s film adaptation of Jack Kerouac’s On the Road. He currently lives in Berlin with his wife and son.

Actually, Riley almost didn’t land the role of Diaval in Maleficent. Riley told TotalFilm.com in a Sept. 2012 interview that after he auditioned for the part, he was told that he “wasn’t really Disney material”. Two weeks later, Jolie intervened, impressed by what she saw on Riley’s audition tape. The rest, as they say, is history. "I guess I owe her a pint,” Riley joked. (But seriously, he really does owe Angie a pint.)

Essentially, that’s Diaval. Only in Maleficent, Diaval is a shape-shifter — he's able to assume many forms. He can be a human, he can turn into a bird, or he can transform into a giant freakin’ badass fire-breathing DRAGON. That’s right, Moviefone just confirmed that the dragon we’ve seen in the film’s trailers is actually Diaval, not Maleficent. Apparently, he’s a good friend for a super villain (err, sorry, super misunderstood person) like Maleficent to have around!

In addition to shape-shifting, Diaval also seems to be able to appear and disappear at will. I imagine that comes in handy when you’re working alongside the kingdom's most-wanted sorceress! It will be interesting to see if Diaval has any influence over Maleficent, or if he really just takes orders and does her bidding.

Check out Diaval’s dramatic new character poster below. The feathers in his hair I get, but what’s the deal with those gnarly scars? Details on Diaval have been a little scarce thus far, so I’m really anticipating seeing Maleficent and finally finding out more about him. He definitely seems like he’ll have an interesting back-story, that's for sure. I can’t wait!