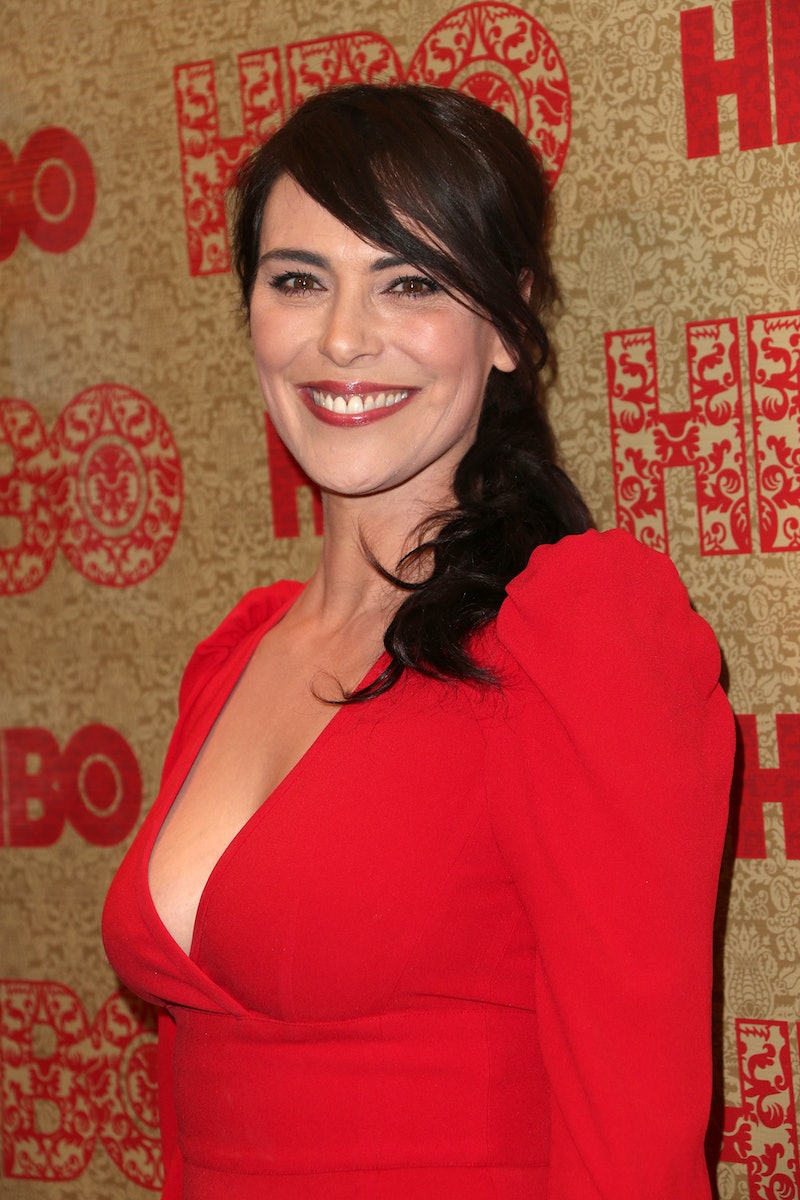 Michelle Forbes isn't exactly a household name, but she might be poised to become one. Lionsgate just announced that Forbes is joining the cast of the final Hunger Games film, Mockingjay Part 2. Who is she? Who will be she playing? And why does she look so dang familiar? Read on to find out!

The 49-year-old native of Austin, Texas has built a steady career out of recurring roles on many popular TV shows. She cut her teeth on the daytime soap Guiding Light for two years, which earned her a 1990 Daytime Emmy nomination. After trying her hand at theater and indie films for a few years, Forbes landed her first major role on primetime television in an eight-episode arc on Star Trek: The Next Generation. As disgraced Starfleet ensign Ro Laren, Forbes firmly ensconced herself in nerd hearts everywhere, despite her relatively brief time on the show.

Her next major role was on NBC's Homicide: Life on the Street, where she played chief medical examiner Julianna Cox for two years before a major cast shake-up booted her and several others off the show. (The series only survived one more season.) She followed that up with consecutive stints on several beloved shows that firmly cemented her status as a popular go-to guest star: a large arc as presidential aide Lynn Kresge on Season 2 of 24; a three-episode stint on Battlestar Galactica; and guest spots on Alias, Lost, and Prison Break.

Executives at HBO must have noticed her increasing popularity, because she landed on two of the network's shows in 2008: as therapist Paul's embittered wife Kate on In Treatment, and as Tara's rich new friend Maryann Forrester on True Blood. It was her role in the latter show that most people will remember her for. Introduced at the end of True Blood's first season, Maryann turned out to be the main villain of Season 2. Cool and collected on the outside, it was eventually revealed that Maryann was actually a manipulative Maenad — a supernatural being devoted to the worship of Dionysus who brought about the destruction of most of Bon Temps.

She followed up that deliciously evil role with something totally different: Mitch, the mourning mother of dead Rosie Larsen on AMC's The Killing. Her raw, affecting performance on that drippy crime drama earned her rave reviews and a Primetime Emmy nomination for Outstanding Supporting Actress in a Drama Series. Critics often agreed that she was one of the best things about the show's overly-dragged-out mystery — sadly, her character departed the show after Rosie's murder was solved at the end of the second season. But Forbes Fans will be happy to know that she'll be back on television this spring, with a recurring role on BBC America's Orphan Black .

So who will she be playing in Mockingjay Part 2? Forbes landed the role of Lieutenant Jackson, a soldier from District 13 and second-in-command to Boggs in the unit Katniss is assigned to. (Spoiler alert for those who haven't read the book!) After Boggs is killed, Jackson assumes nominal control of the unit, although she reluctantly defers to Katniss. She ends up sacrificing herself in the meat grinder pod to allow Katniss time to escape the deformed lizard mutts that were pursuing them through the sewers. (End spoilers.)

We couldn't be more excited to see Forbes join the already impressive cast of the final Hunger Games film. She's had experience with science-fiction (Battlestar Galactica), action (Prison Break), and drama (In Treatment); she can be both despicable (True Blood) and relatable (The Killing). In other words, she's perfect for Lieutenant Jackson and will fit perfectly into the world of Panem. Not to mention, Forbes has put in consistently solid work on television for over two-and-a-half decades, and deserves to break into the mainstream. She's always been one of those people who you scratch your head and wonder, "Where do I know her from?" when you see her face. Hopefully Mockingjay Part 2 will help launch her into a successful film career, and audiences everywhere will recognize her for what she is: an impressive and hard-working talent.

More like this
This 'Anatomy Of A Scandal' Star Has Joined The 'Bridgerton' Family
By Sam Ramsden
What’s New On Netflix: A Victoria Justice Rom-Com & The Return Of David Letterman
By Arya Roshanian
Selena Gomez’s ‘SNL’ Hosting Debut Had Twitter Gushing Over ‘Barney’ & Wigs
By Stephanie Topacio Long
'Bridgerton' Star Nicola Coughlan Confirms Season 3 Will Focus On Colin & Penelope
By Grace Wehniainen and Alyssa Lapid
Get Even More From Bustle — Sign Up For The Newsletter