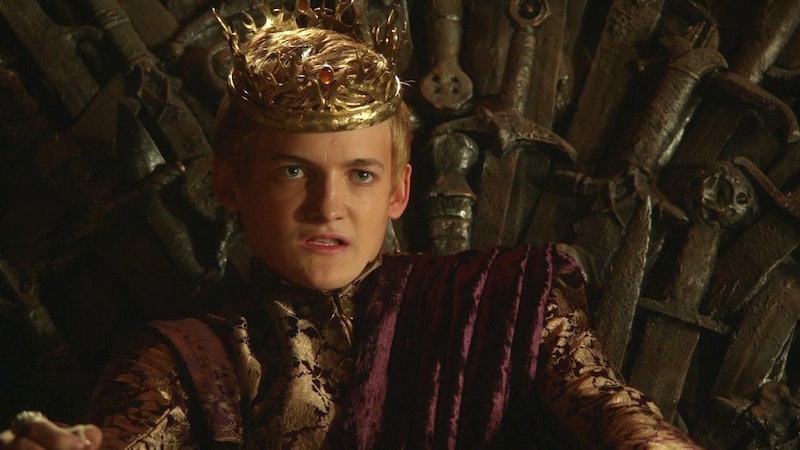 Rest in Peace, King Joffrey Baratheon... but not really. The universally despised Game of Thrones villain met his vicious end, much to the delight of everyone, a few weeks ago and it's safe to say nobody is sad to see Jack Gleeson's smarmy, straight-up evil character go. In fact, people must be so hesitant to give any satisfaction (even in the afterlife) they won't even vote him the number one choice for the top television character people most love to hate, even if he deserves the rightful spot on that throne. In a nationwide poll conducted by E-Score, Joffrey was inexplicably bested by Once Upon a Time's Evil Queen/Regina Mills (played by Lana Parrilla).

In fact, Once Upon a Time, Game of Thrones and Bates Motel had the most love-to-hate characters on the list, with two each. (Regina Mills and Mr. Gold/Rumplestiltskin on OUAT, Cersei Lannister and Joffrey on GOT and Norman and Norma Bates on Bates Motel.) Check out the full list here:

I mean, let's call a spade a spade here: this is a weird, borderline baffling list. There are obvious ones that make sense, like The Governor on The Walking Dead (he grabbed the No. 4 spot) and Hannibal Lecter on Hannibal (he gobbled up the No. 5 spot), but did we all really love to hate Dexter Morgan on Dexter (No. 10)? Didn't we just straight-up hate him and the show by the end of their run? Where in the world is Breaking Bad's Walter White? Mad Men's Pete Campbell? Girls' Hannah Horvath? Homeland's Dana Brody? (It should be noted that House of Cards' Kevin Underwood came in 11th place.) The Internet has had some pretty strong opinions about them before, it's sort of hard to believe they are less-hated than, say, modern-day J.R. Ewing. Either way, tough break, Joffrey: