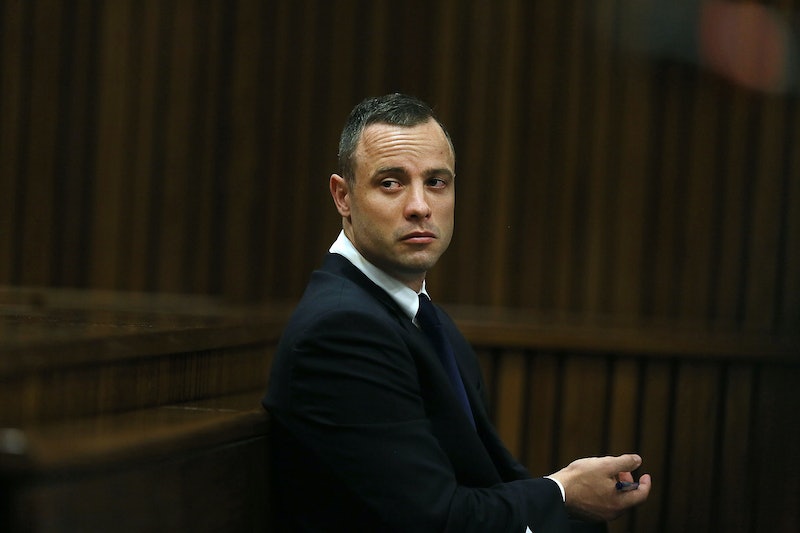 The murder trial of former Olympian Oscar Pistorius is now stretching into its third month, and we've still got a long way to go. The proceedings began back on March 3, just over a year after the Blade Runner shot and killed his girlfriend, Reeva Steenkamp, in the early hours of Feb. 14 — and it could be July before a verdict is reached. As the defense prepares to call a whole host of new witnesses, here's a look back at the trial's key moments so far...

Pistorius took the stand on the opening day of the trial to enter his pleas. He denied "wilfully and intentionally" killing Steenkamp, and also pleaded not guilty to three other charges in connection with reckless handling of a firearm. In a statement read out to the court, Pistorius said that he was in a "loving relationship" with Steenkamp and that the case against him was purely "circumstantial."

That same day, "pit bull" prosecutor Gerrie Nel called his first witness to the stand — Michelle Burger, a neighbor of Pistorius and a professor at the University of Pretoria — who told the court in Afrikaans how she heard four gun shots and "blood curdling screams."

The balance of favor swung over to the side of the defense while Pistorius's neighbors were on the stand. Questioning by the Olympian's defense lawyer, Barry Roux, highlighted inconsistencies in the testimony of neighbor Charl Johnson, who Roux suggested had altered his testimony to match that of his wife, Michelle Burger.

Roux also questioned another neighbor, Dr. Johan Stipp, who lives right next to Pistorius, directly overlooking the bathroom. Stipp said he heard two sets of bangs —two or three, and then another three — which were separated by screams and silence.

This helped to further the defense's claim that from a distance it is impossible to tell the difference between the sound of a gun and a cricket bat hitting against a door, and impossible to tell whether the screams came from Steenkamp or from Pistorius himself.

Over the past two months, we've watched the Blade Runner display a wide range of emotional reactions to the goings-on in the court room. He was crying and sobbing from the very first day. But it was Day 6 when Pistorius vomited in court for the first time as pathologist Professor Gert Saayman gave his gruesomely graphic testimony about the damages Pistorius's bullets wreaked in Steenkamp's body.

A bucket was placed under his desk.

Roux showed the court a YouTube video made by self-described “certified senior crime scene analyst” Alexander Jason, in which the sound of a bullet firing at a door from the same gun used by Pistorius is compared to the sound of a cricket bat striking the same door.

Roux used the video to cast doubt on the neighbors' testimony, arguing that the sounds they heard could well have been Pistorius screaming and attempting to bash down the toilet door to get to Steenkamp.

At the beginning of the third week of the trial, Sean Rens, the manager of a firearms training academy south of Johannesburg, testified that Pistorius had attempted to buy seven firearms, even though he was fully aware that the law prohibits homeowners from using lethal force unless their lives are in danger. Rens told the court that Pistorius "had a great love and enthusiasm" for guns.

Over the course of two days the court heard a series of text messages extracted from Steenkamp's phone after she was killed. The first day focused on the handful of messages between the pair that seemed to suggest Pistorius was giving Steenkamp a hard time, acting jealously and making her feel afraid.

“I’m scared of you sometimes, of how you snap at me," Steenkamp wrote in one message.

The following day, the defense drew attention to the "90 percent" of messages between the couple that appeared to be "loving."

Pistorius finally took to the stand to start giving his testimony on April 7, 16 days into the trial. He opened with an emotional apology to Steenkamp's family.

He told the court that he was suffering from "terrible nightmares," that he often woke in the night to the memory of the smell of Steenkamp's blood and that he had no desire to handle a firearm ever again.

Pistorius also talked of his childhood and crimes that he had witnessed throughout his life, making him exceptionally cautious when it came to his personal safety and that of Steenkamp.

On Pistorius's third day on the stand, the court was shown a video of him expertly handling a gun, using it to blow a watermelon to pieces. He is then heard off-camera cackling with laughter and saying: "It's a lot softer than brains. But ... it's like a zombie stopper."

Under intense pressure from Nel, Pistorius told the court that he did not have time to think before discharging the firearm at the toilet door, killing Steenkamp who was cowering behind it. This, said Nel, was inconsistent with his original testimony.

“Your defense had changed. It is not self-defense, it is involuntary action,” Nel said. “It’s now ‘I don’t know why I fired.’”

During a two-week adjournment, prominent South African journalist Jani Allan published an open letter to Pistorius, ridiculing his emotional outbursts in court and accusing him of taking acting lessons. She claimed that she had heard from a "reliable source" that the athlete had taken acting classes to help him give a convincing performance while on the stand. Those in Pistorius's camp hotly denied the accusations.