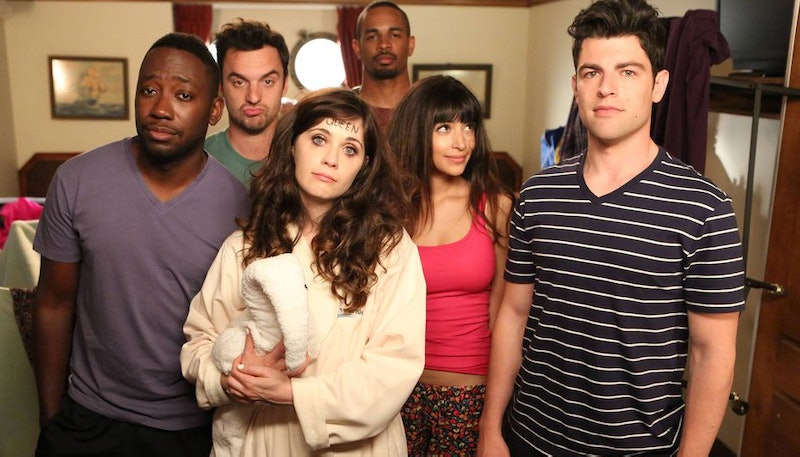 This season of New Girl has had its share of ups and downs. A lot of people have pontificated on the downs in particular — at length and in a way that will probably continue into at least early next season — so we won't focus as much on that here. Because the downs in New Girl's Season 3 finale ("Cruise") were pretty much the same downs that have been plaguing the rest of the season. It's old hat. But the ups? Let's talk about one of the ups, because it's something that's been in the works all season but seems to have finally — finally — gelled. And that up is Winston Bishop.

For a very long time in New Girl's history the writing surrounding Winston had always been a sort of elephant in the room. He wasn't the Coach they'd cast for the pilot, and it was evident from the first season that they didn't quite know what to do with him while they elevated the rest of the ensemble to co-leads. He'd get gradually better, then backslide a bit, then get better, etc. And so it's kind of ironic, then, that it took bringing Coach back into the mix to really get to a place where Winston...had a place.

I'll let you argue amongst yourselves about the merits and drawbacks of bringing Damon Wayans Jr. back onto the show, and about the degree that his Coach did or didn't push Winston (and the ensemble itself) to greatness or badness or what have you. I'll also let you argue amongst yourself about what's been going on in that writer's room in terms of discussion about Lamorne Morris and his character.

What I do know is this: In "Cruise," Winston was the shining star. He was the glue. He was the element on his game throughout. Coach was, too, though he had less to do (and I already promised to leave that can of worms elsewhere).* But Winston really won this round, and he somehow did it without pages of dialogue.

*I will say, though, that the ensemble duo of Winston and Coach continues to do a brilliant, amazingly refreshing job of subverting racial stereotypes in a way I think way more people should be talking about. It's a big deal!

But whenever Winston popped up throughout the episode — usually to comment on what was happening to the other characters, it should be noted — he stole the scene, and he grounded it, and somehow simultaneously he heightened it and made it funnier. He's what New Girl does best, or at least he is in this episode: He's the silly straight man. He's the wry observer with a really wacky perception of the world.

It's a role almost every character has played at some point in the series — literally all of them have stood to the sides making wry comments about how what the others are doing is extremely ill-advise and only destined to end poorly. And Winston, of course, deserves his own big storylines.

But what this episode showed me is that New Girl is ready for Winston. We'll see how they handle their ever-growing ensemble next season — and if the cast changes hands again with Damon Wayans Jr. signed on for another pilot (again). And this season finale certainly wasn't perfect. But I take some comfort in watching a show work its way through one of its long-running struggles. And I'm happy that Winston got to spend a lot of this season being as funny as he deserves.