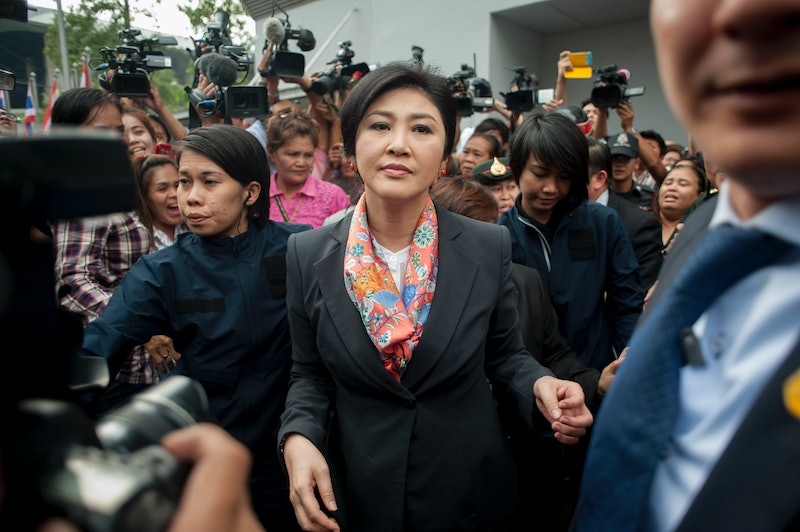 On Wednesday, Thailand Prime Minister Yingluck Shinawatra was dramatically ordered to step down by the country's Constitutional Court. She was found guilty of abuse of power for reassigning a senior security official to a different position. Nine cabinet ministers involved in the transfer of the official have also been removed from their posts.

The civil servant in question, National Security Council chief Thawil Pliensri, was transferred from his position in September 2011 and made an adviser to the Prime Minister, a move the Court maintained was for the benefit of Yingluck's Pheu Thai Party and her own family. The national police chief moved into Thawil's position, and a member of Yingluck's family assumed the role of police chief.

In March 2014 Thawil's transfer was ruled unlawful by the Supreme Administrative Court, and he was reinstated. Yingluck insists that her actions were not to benefit a family member, and that she has not done anything wrong. It's likely that her ouster will spark further protests between her supporters, the Pheu Thai "red shirts," and their "yellow shirt" opponents.

As political tensions in Thailand take a turn for the worse once more, here's what you need to know about Yingluck and her ouster...

1. YINGLUCK'S BROTHER WAS THE FORMER PM

Yingluck's older brother, Thaksin Shinawatra, was the founder of the Thai Rak Thai Party and was Prime Minister of Thailand from 2001 until 2006, when he was ousted by a military coup and accused of corruption, abuse of power, and disrespect of the ruling monarch, King Bhumibol Adulyadej.

Thaksin has been in self-imposed exile since 2008, avoiding corruption charges. His TRT Party was dissolved by Constitutional Court in 2007 over charges of fraud.

Yingluck's Pheu Thai Party, known in Thailand as a pro-Thaksin party, is thought to be at least partly run remotely by Thaksin himself.

Tension's between Yingluck's supporters — mostly working-class and living in rural areas — and supporters of the opposition — generally urban monarchists and the elite — flared last November when Yingluck tried to force through a bill that would have offered amnesty to political offenders from the previous eight years. Critics immediately leaped on the new law as a thinly-veiled attempt by Yingluck to clear the way for Thaksin's return.

In an attempt to appease anti-government protesters riled up about the amnesty bill, on December 9, 2013, Yingluck dissolved the parliament and called for new elections.

By this point, as many as 150,000 demonstrators were rallying in Bangkok, with some pushing to storm Yingluck's office. Just a day earlier the opposing Democrat Party announced that its roughly 150 members would resign from parliament because it was no longer possible for them to work with the government.

At the time, Yingluck anticipated elections to be held by February 2, but that was disrupted by protesters and consequently ruled invalid by the Constitutional Court. Elections are now scheduled to be held on July 20.

Since Yingluck dissolved parliament she has been in the position of "caretaker prime minister," and has very few powers.

4. SOME QUESTION IF THE COURT WAS BIASED

The Court's ruling Wednesday ignited outrage among Yingluck supporters, who claim that the Court is unfairly siding with the anti-government protesters. Yingluck is not the first pro-Thaksin prime minister to be ousted by the Court — in 2008 two others were forced out.

"Throughout my time as prime minister I have given my all to my work for the benefit of my countrymen ... I have never committed any unlawful acts as I have been accused of doing," Yingluck said in a televised news conference, according to Reuters. "From now on, no matter what situation I am in, I will walk on the path of democracy. I am sad that I will not be able to serve you after this."