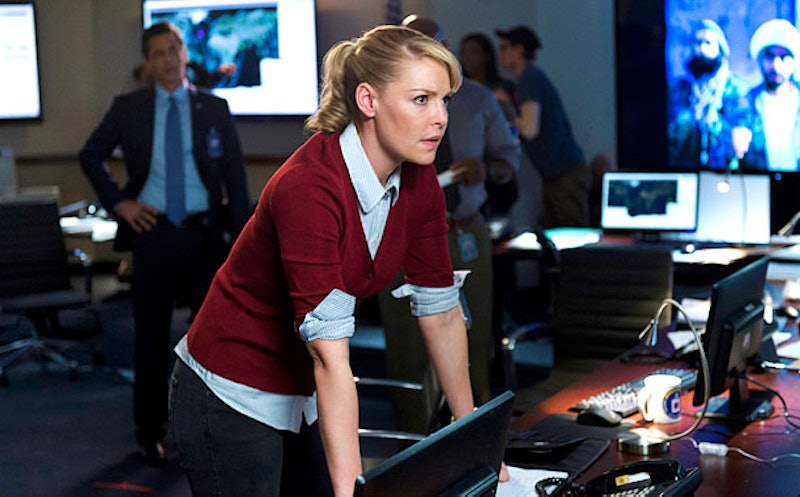 NBC has always been the most frustrating of the major networks, due to its penchant for acquiring great shows — Parks & Rec, Community, Parenthood — and failing to market them well. There was a time, back in the late '90s and early '00s, when this wasn't the case, and hugely successful series like Friends, Will & Grace, and ER gave the network a golden age. Yet in the past decade or so, NBC, despite producing some cult favorites, has been known more for lagging behind its competitors than making "must-see TV." Now, though, that might just begin to change, with a welcome twist; NBC has picked up Marry Me and State of Affairs, among others, for the fall season, and not only do these shows look fantastic, nearly all of them are feminist.

An influx of female-centric, non-cliched TV would be a big deal for any network, but it's especially exciting to see it happen at NBC. Despite the channel's high quality, very few of its current shows could be classified as feminist. There's Parks & Rec, of course, and Parenthood, but the vast majority of others revolve around male actors, with the women relegated to the background, if they have roles at all. Even CBS, considered the least liberal of the major networks, has more feminist shows than NBC does (Mom, The Good Wife, 2 Broke Girls on occasion). The Peacock is in desperate need for a makeover, and judging by the series it just picked up for the fall, it's more than ready to make it happen.

On the comedy end, there's Marry Me (below), a single-camera show about a couple (Happy Endings' Casey Wilson and Children's Hospital Ken Marino) who are forced to work on their relationship after a failed proposal. The series has garnered great reviews for its script, meaning that there's a good likelihood Wilson's character isn't relegated to "whiny girlfriend" or some other one-note title.

Then there's Unbreakable Kimmy Schmidt, the Tina Fey-written series about a woman (The Office's Ellie Kemper) who starts a new life in New York after escaping from a doomsday cult, which, which those people involved, can't not be feminist. While they haven't yet been picked up, several other NBC pilots look to be female-centric, as well; there's Rashida Jones' A to Z, Kate Walsh's Bad Judge, Krysten Ritter's Mission Control, and Amy Poehler's Old Soul, among others.

As for drama, NBC picked up Shades of Blue , an awesomely feminist series starring Jennifer Lopez as a detective and single mom working undercover for the FBI, back in February. The most notable new addition to the fall slate is State of Affairs, a Scandal-like thriller about a CIA agent (Katherine Heigl) who counsels the president. Sure, Heigl has her critics, but this series, featuring a black, female president played by the incredible Alfre Woodard, sounds like a win for feminism.

There's also Allegiance, which, although starring a man, Scott Cohen, in the lead role, features a prominent turn by The Newsroom's Hope Davis. As a deactivated Russian spy, Davis' character is forced to choose between terrorism and her family's safety, a meaty part that comes with a complex, feminist character background. Finally, there's Odyssey, a Crash-like tale of three families torn apart when a soldier (Anna Friel), a lawyer (Peter Facinelli), and an activist (Jake Robinson) uncover a military conspiracy. Possible other dramas to come are female-centric offerings by Debra Messing and Ashley Judd.

All of these shows won't fix NBC, of course — only a completely new marketing strategy can do that — but it'll certainly give the network a much-needed push out of the primetime gutter. And even if its new feminist slant was unintentional, JUST a side effect of picking good-sounding shows, it's still a huge win for women on TV. The fact that females are underrepresented in television isn't exactly news, so for a network as big as NBC to make such a drastic change, even accidentally, is hugely important. Now, let's just hope that those shows live up to their feminist loglines.