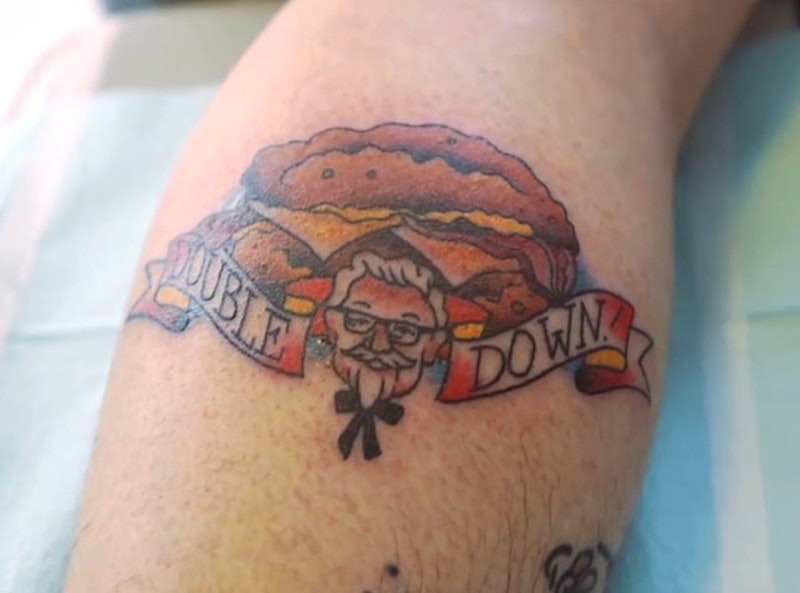 A Louisville, Kentucky man has garnered nationwide attention after he actually consented to getting a tattoo of a KFC Double Down sandwich on his leg as part of a new commercial. Yes, a tattoo…as in, it's permanently inscribed on his body.

In case you didn’t know, and just so you can fully appreciate the absurdity of this story, a KFC Double Down is described by the fast food company as “bacon, Monterey Jack cheese, and Colonel’s sauce sandwiched between two 100 percent white meat Original Recipe® filets.” So a fried chicken sandwich where the chicken is taking the place of the bread. I can practically feel my arteries clogging just thinking about it.

The man — whose name remains anonymous, although we can see his face in the commercial, oddly enough — says his love for the Double Down began when the "sandwich" first came out and he went to KFC with his girlfriend to try one. The rest is eternally-inked history. In the ad, you can watch the guy waiting at the tattoo parlor to immortalize his love for the crazy fast-food creation while the artist picks out the appropriate colors for cheese, chicken, and bacon (which actually sounds really complicated).

“It’s a tattoo that people will always ask about. And it’s funny, so,” he explained of his reasoning behind getting the new ink. Oh, OK, that explains it all...except not. I still don’t get it.

I guess this man is hardly the only person out there with a bad tattoo.The featured tattoo artist from Louisville's Tattoo Salvation parlor even says that he has inked Colonel Sanders' face more than any other face...because, you know, Amurrica.

Watch him the inking process here: