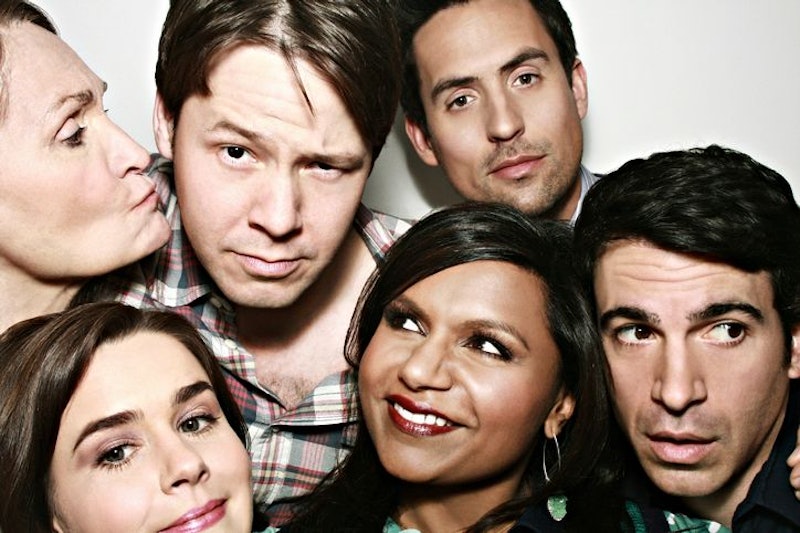 Mindy's romantic comedy fantasy finally came true on the Season 2 finale of The Mindy Project , making for one of the best episodes of the show to date. (Seriously, guys, I cried. I didn't cry during the "you is kind, you is important" scene in The Help, but The Mindy Project totally broke me down. Damn you, Danny Castellano.)

Ever wonder why Mindy regards the Empire State Building as the most romantic spot in all of New York? You can blame it on An Affair to Remember. In this one, Cary Grant and Deborah Kerr play strangers Nickie and Terry who fall in love on a trip but must end their current relationships before being able to reunite. They agree to meet on top of the Empire State Building six months after their initial meeting — a promise both intend to keep. However, on her way to the Empire State Building, Terry is hit by a car and is seriously injured. Nickie goes to the roof and waits for her, but she never shows up. (Because, uh, she's in the hospital.) Mindy references the film twice in the episode — once, when Mindy gets stood up by "Andy" at the top of the tower, and again when Danny gets hit by a taxi cab on his way to the building.

In this rom-com starring Meg Ryan and Tom Hanks, two bookstore owners start an intense rivalry — totally unaware that they have been anonymously e-mail flirting for months. When Joe (Hanks) realizes that his nemesis is actually the woman he "internet loves," he struggles to keep the secret. Danny grabs Mindy's attention by e-mailing her as "Andy," only to have her fall head over heels for Danny-over-the-internet. (Be real, Mindy. Didn't you secretly want it to be him?)

There's a happier ending for this Empire State Building story, which borrowed heavily from An Affair To Remember. For one thing, both parties actually show up to the roof deck. They don't make out on the gross floor a' la Mindy and Danny, but they do eventually meet up there.

The finale references the iconic Billy Crystal/Meg Ryan movie by giving both Danny and Mindy voiceovers AND having Danny pull a major Harry-on-New-Year's chase scene to get to Mindy at the Empire State Building. These two actually watch When Harry Met Sally in the episode — Danny paraphrases the infamous diner scene quote as "I'll have whatever's giving her an orgasm!"

Can't wait for more terrific rom-com references in Season 3. Is it fall yet?