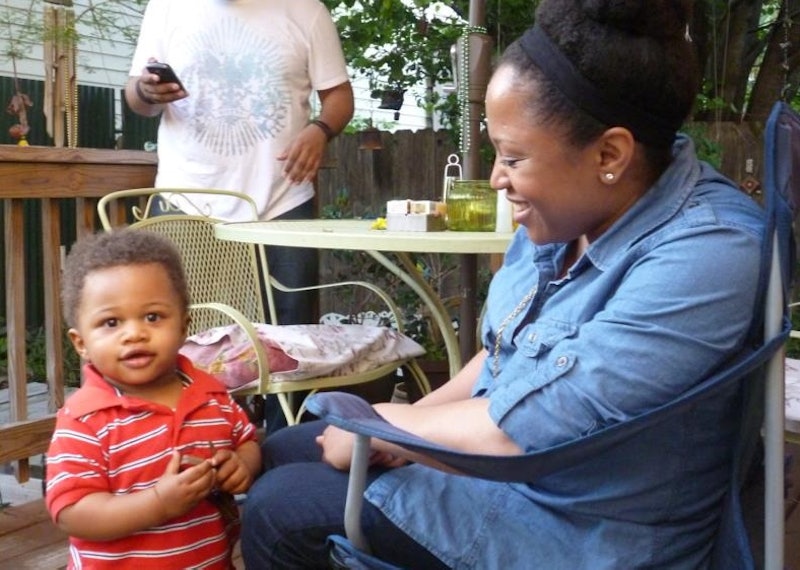 Becoming a mother was never high on my priorities list. If I had been forced to give procreation a ranking, it would have fallen around #14. Backpacking Europe, diving the Great Barrier Reef, starting my own company (got that one done, by the way), and penning a memoir held my top spots. Marriage wasn't even on my radar, until a certain fellow finagled his way back into my life and I fell for it — er ... him.

When I found out I was pregnant at 32, I was not weeping for joy at the thought of impending motherhood. I was moved to tears, yes, but they were tears of paralyzing fear, not happiness. I thought to myself, Good god, I am about to be responsible for another life, and I gotta make sure he doesn't become an ax murderer. No pressure or anything.

My husband and I embarked on the grand experiment we named Jackson in March 2012, and parenting has proven one of the hardest jobs we've ever been hired to do. No, not because of the physicality or the thanklessness that people moan about, but because you want to do such a good job that the reality can be very disappointing. You imagine Donna Reed and instead you get The Simpsons, only with a messier house.

My coping mechanism has been the unofficial mommy support group I've formed for myself. Yes, we share tips and child rearing hacks during our marathon Facebook threads, but more often, we just share in the ridiculousness of motherhood and make each other feel a little less crazy.

As a new mom, you do and think the strangest things for the sake of your kids. It's easy to feel like you're all alone. But with a mother's group, you find kindred spirits who have also peed with their child on their lap in a public restroom, or stared a bit too long at that bottle of Benadryl right before nap time. These other new mothers get me in a way not even my husband can.

So in honor of us new mamas, here are 13 things only we newer members of the mommy tribe can truly understand.

You're in IKEA when the pacifier falls under the EKTORP sofa. Do you trek all the way to bathroom accessorized with a crying child, or wipe it off and pray they've swept recently? I'll never tell.

The “Do I check on him?” Dance

You know, the dance you do outside the closed door of your kid's room when you hear something strange? You don’t want to wake them if they sleeping, but your concern over that noise is eating away at you.

The moment you realize you love kids shows

All the sudden, you really want to see how this episode of Pajanimals will pan out. Kid’s shows can be incredibly riveting if you pay attention/are horribly sleep-deprived.

the awkwardness of Playground Parent Nicities

Fancy meeting you here... You are swinging your kid right next to them, so you gotta say something, right?

the utter joy that is making a Fool of Yourself

The smile on their face makes it worth it.

the importance of "Mother Zen Space"

You know, that special place you retreat to when they do something really bad, like break something expensive, karate kick you in the face, throw food at you, puke on you, etc.

the magic of the Wax on, Wax off moment

You are the Mr. Miyagi to their Daniel san, so when they show off your teachings by saying please or the singing alphabet song to strangers, it's pure magic.

having Real Food for Dinner Is awesome — Who Knew?

No more eating cereal and ramen noodles for dinner for me! I have to cook real meals now.

You meant to say, “Hi how are you?” but your kid decided to edit that to say, “nfiowuroevuo;nrfuoav;nrn.”

the Fear of becoming "That Mom"

A myriad of things fall under the fear of becoming "That Mom" — sharing too many kid pics on social media, no longer going out for girls night, or only having child-related stories to share. Whoever That Mom is, you just know you don’t want to become her.

the Agony and the Ecstasy of the Babysitter

Leaving you child with a babysitter is the best/worst thing on Earth. You enjoy the freedom, but constantly think a robot T-Rex will bust through the house and steal your child while the babysitter stands idly by.

Don't worry, they never work for me either.

and most of all, that this is the best sugar you can eat

Happy Mother's Day to all my fellow mamas.