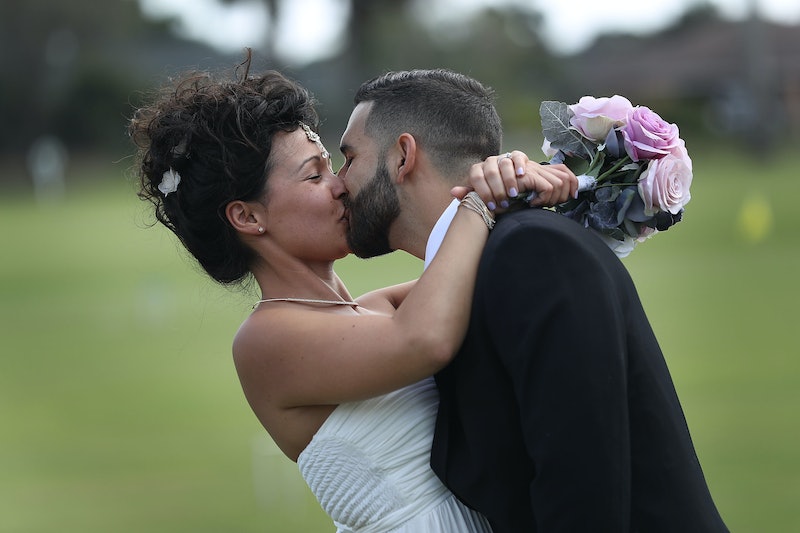 A few weeks ago, we learned that the average cost of attending a wedding — just going to one, mind you, not actually throwing one — is almost $600, way, way up from what it was a few years ago. We also already have some data about how much the average wedding costs — but knowing these numbers isn’t enough. We want to know how everyone feels about all that money going down the Great Wedding Industry Drain. Are people cool with this nonsense? Lucky for us, a new survey conducted by credit repair experts Lexington Law has some answers. The short version: Our views on wedding-related debt say a lot about how we think about and deal with money. Here’s the long version:

The study polled 2,039 adults ages 18 and above in an online survey. In what probably bodes well for the future financial security of couples, a whopping 91 percent said they’d rather enter a marriage debt-free than have a dream wedding; additionally, 34 percent said they would rather save up exactly what they need for a wedding than just go ahead and splurge. But, four percent did say that they either would or did go into debt to pay for their dream wedding — and even more shockingly, one percent are actually willing to ruin their credit to pay for it. True, that figure may only be one person out of every hundred, but I’m still surprised that anyone would willingly ruin their credit for a “dream wedding” — something which I’m pretty sure doesn’t actually exist. Or if it does, it seems entirely feasible to be able to have one on a budget. To each his or her own, though, right?

As for some specific budgets, most of us are apparently keeping things on the less expensive end: 36 percent of respondents said they would budget less than $5,000 on a dream wedding; 35 percent said they were willing to pay between $5,000 and $12,000; and only 5 percent indicated willingness to pay between $30,000 and $100,000. Age is also a factor, with older respondents keeping a little tighter hold on the purse strings: While seven percent of couples between the ages of 18 and 34 said they’d be willing to spring for a $30,000 - $100,000 wedding, only three percent of Americans age 45 and over would.

There's loads more information in the full study, but out of all of the numbers and figures, here's what I found to be the weirdest: We already know that the average cost of a wedding in the United States is $30,000. True, that figure may be skewed a little bit by places like Manhattan, where it costs a mind-numbing $87,000 — but either way, it’s still a big number. According to the Lexington Law survey, though, most Americans are only willing to pay $7,600 for their dream wedding.

What on earth is going on here? That’s a full $22,400 less than what people are apparently actually spending on weddings. How can we account for this huge discrepancy? Is it a matter of the big spenders skewing the number? Is it the fact that the 30k survey was conducted by The Knot? Are people initially budgeting somewhere in the neighborhood of $7,000, only to find themselves going massively over budget? I’ve never planned a wedding, so I have no idea how it might work. Anyone care to enlighten me? Because seriously — I would be extremely interested to know how we jump from $7,600 to $30,000.

According to the great wealth of knowledge that is the Internet, it is, in fact, possible to have an awesome wedding with all the people you actually want there for cheap. Abigail Dalton, for example, wrote on LearnVest in 2012 about how she threw a 100-guest wedding for under $4,000. SheKnows also has some useful tips on how to have the wedding you want on the budget you have, as does The Simple Dollar. Clearly the way we’re thinking is conducive to changing the wedding cost norm — now we just need to act in such a way that changes it, too. It can’t be that hard to have our wedding cake and eat it, too!

More like this
Ben Affleck Wrote A 12-Page-Long Speech For Wedding To Jennifer Lopez, Says Kevin Smith
By Brad Witter and Radhika Menon
Black Women's Equal Pay Day Highlights An Upsetting Problem
By Brandi Neal
'Selling Sunset's Vanessa Married Her British Beau Nick In A “Fairytale” Wedding
By Darshita Goyal
3 Zodiac Signs Most Likely To Be The Center Of Attention
By Nina Kahn
Get Even More From Bustle — Sign Up For The Newsletter