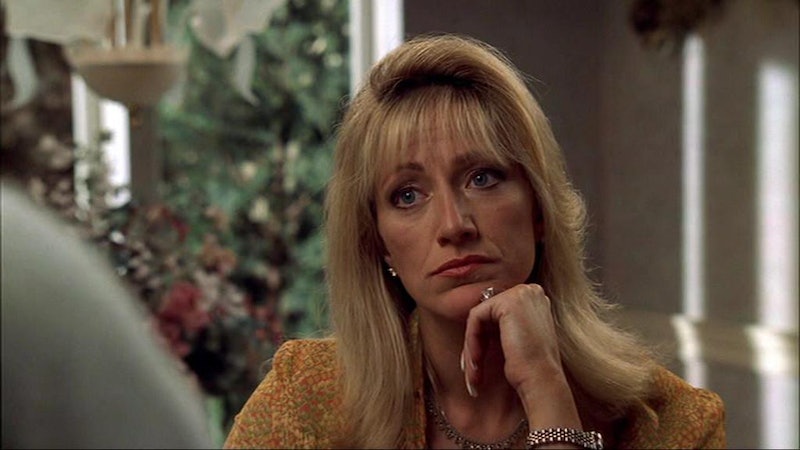 Mother's Day is almost upon us, people. (If you haven't gotten your mom a gift yet, shame on you — but here are some last minute ideas.) And it's a magical time of year because moms are just the greatest people ever, considering without most of them you wouldn't be alive. So while we're all celebrating our epically awesome real moms, we should also extend some celebration to the TV moms that we love and love to hate. Personally, my own mother and I love to discuss how terrible Cersei Lannister is on a weekly basis.

There have been some really great moms on television over the years — cough, Tami Taylor, cough — and some impossibly shitty ones — we're looking at you Betty Draper. But whether we envied their children or they made us really appreciate the great moms we had IRL, each and every one of these matriarchs had a epic moment that's worthy of celebrating this weekend. Because how else would we appreciate the Kirsten Cohens of the world without the Lucille Bluths? We would, but it certainly doesn't hurt to have the dichotomy.

So here 12 great TV mom moments from the best of the best to the absolute worst — because it's Mother's Day and moms rock.

We love 'em, because they're so damn good at what they do.

The greatest of all TV moms of all time — it's almost impossible to choose the greatest Tami Taylor moment. But this one, where she called out Riggins for having rally girls write his English papers is a true example of her motherly brilliance.

It took her awhile to come around, but Kirsten letting Ryan move in with the Cohen's was one of the greatest mom moments of all time. There would've been no O.C. if Kirsten had kicked Ryan to the curb, so thanks, girl. And she more or less ran a multi-million dollar business on her own — can you say badass?

Another mom where it's really hard to choose her greatest moment because Lorelai just had so many. But this one (or really any one where she gives relationship advice) really takes the cake. If you're going to ruin your life, that guy had better be worth it.

Carmela had a lot of great one-liners and she really held the Soprano family together but her best and most badass moment was when she called out Tony for his years of philandering. Because no woman deserves to be treated that way, especially not a mother this good.

It's not exactly great to start brawling with other mothers in front of your kids — but just like Molly Weasley, when Haley threw down with Chuck's mom when she insulted Jamie, it was awesome. And she's the most well-adjusted teen mom of all time, just saying.

"Marcia, Marcia, Marcia." Carol convincing Jan that she's just as important as her older sister was a quintessential mom moment.

She might only be the mother of three dragons — but she's still a pretty great mother, considering. And in this epic moment, she became both herself and a mother.

The Bad/Worst Of All Time Moms

Because they need love too.

How many times have you said this today? Marie with her passive aggressive comments was one of the best worst moms ever.

This is not me condoning child abuse — but after weeks of being impossibly and inexcusably rude to his mother, Cersei finally put Joffrey in place. And we all cheered even though she's the worst.

There were a lot of terrible parents on Gossip Girl, but Lily was definitely Top 3. But in this moment, where she defended Serena against her terrible, judgmental sister Carole was an epic demonstration of motherhood — mostly because she spent most of her time condemning her daughter.

Do I even need an explanation here?

This whole interview was a great Selina Meyer moment, but forgetting that her own daughter is a vegetarian and then trying to force her to eat chicken? Unreal.

She might actually be the worst mother on this list — at the end of the Season 6 finale, Gemma brutally murdered her son Jax's baby momma. It was easily her best, albeit most terrifying, moment on the series.

Rounding out the worst of the worst, the former Betty Draper. But hate her or love her, there is no better Betty moment than this one.