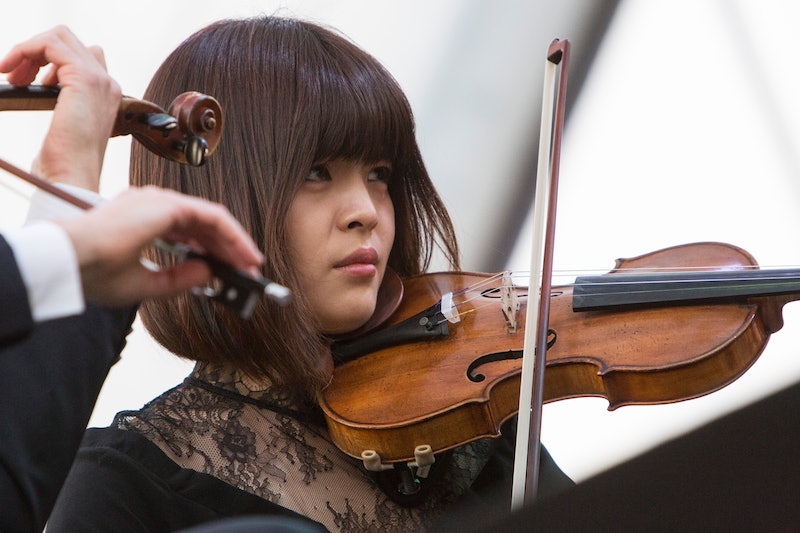 In some ways, music is a lot like literature. It can be pleasing, enlightening, even life-changing. A great song, like a great book, affects the listener in unanticipated ways and resonates long after the music has ceased. And, if done well, both music and literature have a rhythm and tone unique to their authors; you wouldn't confuse a passage from a Charles Dickens novel with one from a Harry Potter book, nor would you mistake a verse from "A Hard Day's Night" for one from a Lady Gaga song.

But how do you describe your favorite song? How do you put its melody into words or explain the beauty of its chords? How do you begin to describe the emotions that it provokes in you? As the maxim goes, "Writing about music is like dancing about architecture." In other words, despite the similarities between literature and music, conveying sound through text is a challenge, even for the most talented of writers.

For those writers who give it a shot, though, the descriptions have the potential to be breathtakingly beautiful. These 11 authors (inspired by Beethoven, Joni Mitchell, and seemingly everything in between) have succeeded in putting music into words, with beautiful results.

“It was the kind of college gathering where I kept sneaking Blackstreet and Aaliyah albums into the CD drawer, and friends kept replacing them with other things. And then there she was, suddenly: a piercing sound, a sort of wailing — a white woman, wailing, picking out notes in a non-sequence. Out of tune — or out of anything I understood at the time as “tune.” I picked up the CD cover and frowned at it. A skinny blonde with heavy bangs, covered in blue.” —“Some Notes on Attunement: A Voyage Around Joni Mitchell”

“Music began clanging against the rocks up here. It is a motor horn down in the street, he muttered; but up here it cannoned from rock to rock, divided, met in shocks of sounds which rose in smooth columns (that music should be visible was a discovery) and became an anthem, an anthem twined round now by a shepherd boy’s piping (That’s an old man playing a penny whistle by the public-house, he muttered) which as the boy stood still came bubbling from his pipe, and then, as he climbed higher, made its exquisite plaint while the traffic passed beneath. This boy’s elegy is played among the traffic, thought Septimus.” —Mrs. Dalloway

“How shall I say it? Music makes me forget my real situation. It transports me into a state which is not my own. Under the influence of music I really seem to feel what I do not feel, to understand what I do not understand, to have powers which I cannot have … And music transports me immediately into the condition of soul in which he who wrote the music found himself at that time. I become confounded with his soul, and with him I pass from one condition to another.” —"The Kreutzer Sonata"

“In grade school we played ‘Puff, the Magic Dragon’ so many times that our father’s portable stereo practically imploded under the strain. We thought we knew the words too. ‘Puff, the magic dragon, lived by the sea, and frolicked in the Ottomiss…’ we sang. Later we realized Puff actually frolicked in the ‘autumn mist,’ but by then ‘Ottomiss’ had morphed in our minds into an actual place like the Emerald City or Cinderella’s palace. To us, in Ottomiss, big luminous castles beckoned in a landscape that looked like a giant unearthed chest of treasure, with sparkling jewels spilling over the side, where you could bound through fields of marigolds as soft as the eyelashes of a million angels with your best friend by your side.” — Bleachy-Haired Honky Bitch: Tales from a Bad Neighborhood

“When the first movement ended, Thea’s hands and feet were cold as ice. She was too much excited to know anything except that she wanted something desperately, and when the English horns gave out the theme of the Largo, she knew that what she wanted was exactly that. Here were the sand hills, the grasshoppers and locusts, all the things that wakened and chirped in the early morning; the reaching and reaching of high plains, the immeasurable yearning of all flat lands.” —The Song of the Lark

“The music started with a goblin walking quietly over the universe, from end to end. Others followed him. They were not aggressive creatures; it was that that made them so terrible to Helen. They merely observed in passing that there was no such thing as splendor or heroism in the world. After the interlude of elephants dancing, they returned and made the observation for the second time …

Her brother raised his finger: it was the transitional passage on the drums.

For, as if things were going too far, Beethoven took hold of the goblins and made them do what he wanted.” —Howards End

“One of those horn kind of instruments played a sad and silver tune. Then the music rose up angry and with excitement underneath. And finally the black march again.

But maybe the last part of the symphony was the music she loved the best — glad and like the greatest people in the world running and springing up in a hard, free way. Wonderful music like this was the worst hurt there could be. The whole world was this symphony, and there was not enough of her to listen.” —The Heart is a Lonely Hunter

“At the moment when, standing next to the fireplace, he began to move the bow, I changed completely … My soul, extended like my own hands, received the sounds as if it were rain on dry ground. Román seemed a marvelous, unique artist. He wove in the music a joy so fine that it went beyond the limits of sadness. That nameless music. Román’s music, which I’ve not heard again since that time … And it came to me in waves: first, innocent memories, dreams, struggles, my own vacillating present, and then, sharp joys, sorrows, despair, a significant contraction of life, a negation into nothing. My own death, the feeling of my total despair turned into beauty, an anguished harmony without light.” —Nada

“The theatre doors were closed, but I could hear some music, like a long repetitive whine, coming from upstairs. I went up, pushed the door and it opened…I walked to the front and heard him say, ‘Right, once again, from the twenty-fourth, everyone. Ready,’ and he hummed the melody.

The music sounded sad and strange again, even more drawn out. I’d never heard anything like it. I sat down without a sound. I studied the ceiling and empty boxes, and let myself be carried away by the sounds, which seemed to come from the conductor’s arms.” —Mexican Bolero (Arráncame la vida)

“Tess had heard those notes in the attic above her head. Dim, flattened, constrained by their confinement, they had never appealed to her as now, when they wandered in the still air with a stark quality like that of nudity … She undulated upon the thin notes as upon billows, and their harmonies passed like breezes through her, bringing tears into her eyes. The floating pollen seemed to be his notes made visible, and the dampness of the garden the weeping of the garden’s sensibility. Though near nightfall, the rank-smelling weed-flowers glowed as if they would not close for intentness, and the waves of colour mixed with waves of sound.” —Tess of the D’Urbervilles

“There are these rare moments when musicians together touch something sweeter than they’ve ever found before in rehearsals or performance, beyond the merely collaborative or technically proficient, when their expression becomes as easy and graceful as friendship or love. This is when they give us a glimpse of what we might be, of our best selves, and of an impossible world in which you give everything you have to others, but lose nothing of yourself.” —Saturday