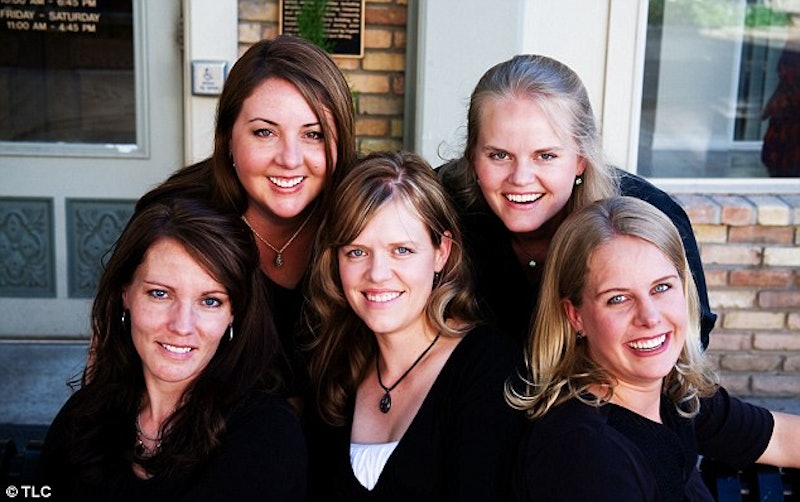 The most addicting and intriguing show on television right now might just be TLC's My Five Wives . It's seriously enthralling. Sure, we've seen shows like Sister Wives and the fictional Big Love, but the five Williams ladies really know how to pull you in.

On Sunday's episode, Brady and his wives will sit down for a "Tell All" edition with NBC's Tamron Hall to discuss everything that happened on and off the camera this past season. Luckily for us, last week's episode already featured the family fielding questions from viewers and fans, and we've compiled a list of the questions that we've all been dying to have answered.

But before we jump right into the thick of it, here's a rundown of the Williams entire family:

Got it? Good. Now here's what we found out about the Williams family and how they feel about their lifestyle.

1. How do the kids feel about sharing their dad?

Dane (age 15): "I think that we get enough, but with a regular family that doesn't have 23 kids, of course they’re going to get more, but I think we get enough."

2. Why do the kids use the word “Aunt” instead of “Mom” when referring to the other moms?

Taylor (16): "It’s just easier to use Aunt because imagine if you called out at dinner, “Mom!” because then five heads would turn around."

Hannah (20): Calling the other ones "Aunt" makes it [their lifestyle] less questionable.

3. How do the kids explain their family to friends?

Dane (15): "Usually I befriend them first so they can know I’m not a weirdo... But the people who find out before I get to know them, they’re like, what the crap."

4. Is there a cutoff to how many children they will all have?

The answer is pretty much, no.

5. Do the kids want to enter polygamist relationships?

The resounding answer is… no. The answers ranged from not believing in it to just not wanting to do it to something along the lines of, "one woman is enough to handle."

6. Why did the wives enter polygamist marriages?

Robyn: "Well, when you fall in love with a guy that’s already married..."

Paulie: "I definitely felt like it was something I had to do because that’s how I was brought up. You needed to do it to go to heaven."

Brady: "Well I know I chose to marry all of you, nobody made me." (We get it, Brady —you have five wives.)

7. How long did he date each wife before marrying them?

8. Would the wives be okay with Brady marrying another woman?

Rosemary: "I don’t think it would be fair to another woman, and I personally think that I’d have a really hard time with it."

9. How would Brady feel if a wife wanted another husband? (Oh, snap.)

Brady: "I totally get that my wives should have the same rights. I am completely a believer in the symmetry of marriage. I personally think that I would not do as good as you guys do. I think I would be a jealous mess. I don’t have the same capacity that you five have."

Nonie: "Are you sure it’s weakness, or is it just humanity?"

Nonie: "Because we feel jealous."

Nonie: "But we could have catfights, and we could do all that kind of stuff."

10. Is there rivalry between the wives or are they close like sisters?

12. What are their favorite body parts of his? (What?)

Nonie: His rear end (she likes watching him walk)

13. What if one or more of their kids came out as gay?

Nonie: "I would not want them to hide it, for the same reasons I did not want to hide our lifestyle. It’s too miserable."

14. Does Brady ever wake up and forget which bed he’s in?

More like this
'Love Island' Has Added Yet Another Bombshell To The Villa
By Bustle UK
'RHOP' Stars Robyn & Juan Reportedly Got Remarried & Filmed The Ceremony
By Brad Witter
The Bachelor’s Christina Mandrell Comes From One Of Country Music’s Most Famous Families
By Brad Witter
Kylie Jenner Clarified How To Pronounce Her Son's New Name
By Jake Viswanath
Get Even More From Bustle — Sign Up For The Newsletter
From hair trends to relationship advice, our daily newsletter has everything you need to sound like a person who’s on TikTok, even if you aren’t.