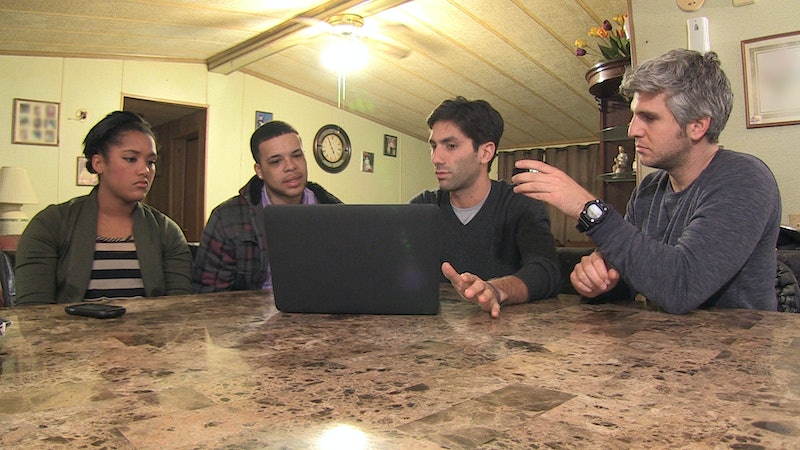 Welcome back, Upper East Siders. Oops, we mean Catfish fanatics. The Season 3 premiere of Catfish aired Wednesday and is as twisted as ever. While it's pretty much a guarantee there will be a lot of feels in each episode, from fights to puppy love to heartbreak, there were so many lives ruined by this seemingly omniscient catfish, it was almost like an episode of the dearly departed CW drama Gossip Girl, as Max declared in the premiere. If only Gossip Girl was still around today, it probably would incorporate a catfish into one of its episodes, and how glorious that would've been. But we digress...

In the episode, we met Craig, a 24-year-old living in Pittsburgh who was introduced to a Florida girl named "Zoe" on Facebook by his sister Miriah. And Craig went on to recount the usual Catfish saga to Nev and Max. "Zoe" provided emotional support for Craig to get through his financial issues and feeling alone in the world. They fell in love after talking online for a year. Every time they planned to meet in person, "Zoe" made up some excuse to bail on Craig. But faster than you can say "Google Image Search," things took a turn for a dark and crazy place.

"Zoe" asked Craig for his Facebook password so she could ensure he wasn't lying to her and talking to other women. Okay... that's a red flag in any relationship, not just when you think you are are being catfished. But for some reason, Craig gave it to her. Could someone please explain why anyone would agree to do this? Anyone? Anyone? If that wasn't bad enough, silly Craig forgot to turn off his photo auto sync on his smartphone, so "Zoe" could go into his Facebook profile and see his photos. She once found a photo Miriah's friend Kalyn had sent to Craig of her in lingerie. Then "Zoe" blasted out the photo of Kalyn on Facebook for all the world to see. Sharing is caring, kids, but not when it comes to Facebook passwords. Just don't do it.

It turned out Kalyn wasn't the only one being publicly humiliated by "Zoe." Craig's sister Miriah also described her as a cyber-bully, and several of her friends were afraid they would be publicly shamed by "Zoe" if they crossed her. "It's a real-life Gossip Girl," Max said, reading our minds and also confirming what we'd all been wondering (Max is, in fact, a Gossip Girl fan).

For someone who was so good at manipulating other people, "Zoe" was actually one of the easier catfish for Nev and Max to figure out. They always slip up somewhere, don't they? In this episode, it happened when a photo of a heavyset young woman Craig didn't recognize got mixed in with his other Facebook photos at the time "Zoe" had his password. "Zoe" told him it was just her friend Cassandra. With just a quick Google search, Nev and Max linked "Zoe"'s phone number to a middle-aged woman who was in some photos with a young man and Cassandra on Facebook. Cassandra blocked Craig on Facebook so he couldn't find her, but her profile was visible to the rest of the world, and most importantly, to Nev and Max. There was an address listed with Cassandra's phone number, and the Google Street View image of the house matched a photo of Cassandra's house on Facebook. She also posted a video on YouTube of herself, and Craig recognized her voice right away as "Zoe"'s. Hook, line, and sinker.

When Nev couldn't get a hold of Cassandra on the phone, they all just decided to head to North Carolina to knock on her door pretty much unannounced, the first time in Catfish history this has ever happened. It didn't look like anyone was home, but then... spotted: Cassandra pulled up in her car. When the gang was like, "Hey, what's your deal?" Cassandra just stood there, with an unsettling smile on her face like the whole situation was funny or something. A girl after Blair Waldorf's heart. She explained that it was just a joke that went too far, and she didn't have genuine feelings for Craig.

Cassandra was a little more apologetic to Craig when she sat down with him the next day, but not much. She was a tough nut to crack, and Nev and Max were just the guys to do it. Cassandra opened up to them about how she had been bullied and had suicidal thoughts in the past. She created the "Zoe" profile because it felt good to trick people. Nev and Max consoled her, assuring her she can turn her life around, and Cassandra seemed to take in their advice.

There was no epilogue, but there was the newly-named after show called Chatfish, whose never ceases to bring a smile to our faces. On it, we learned Craig and Cassandra hadn't spoken to each other since filming the show, which wasn't surprising given that neither could really understand what the other went through. The juiciest bit came at the end when Cassandra said she deleted the "Zoe" profile, but Craig said that was a lie. Given Cassandra's track record, we might want to trust Craig on this one.

No one could really get to the bottom of why Cassandra actually did what she did, so the episode left us with a lingering feeling of uneasiness. But, we'll definitely be back to see what happens next week because, Catfish, we know we love you. XOXO.