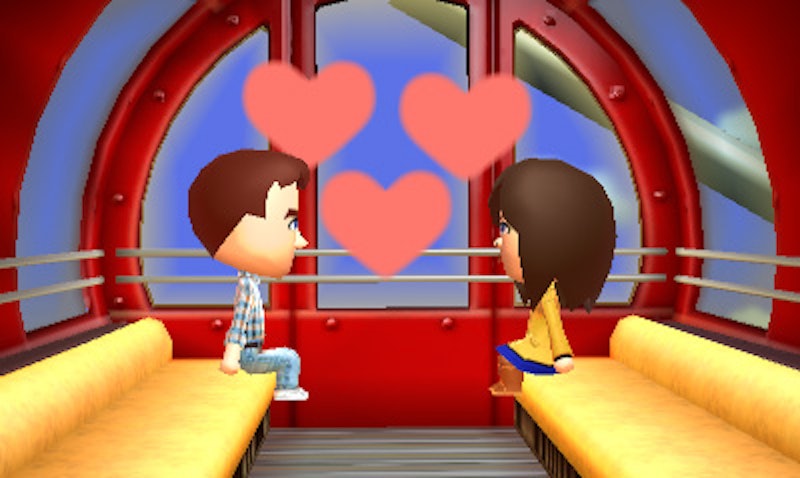 Well, this is discouraging: Nintendo has declined to instate same-sex marriage as a game mechanism in its new life-simulation game, Tomodachi Life — even after an impassioned campaign from the company’s fans urged them to do so. Not cool, Nintendo. Not cool at all.

Tomodachi Life was released in Japan in April 2013; its European and North American release date of June 6 is looming. Like most life-simulation games, Tomodachi Life involves leading your little avatar, or Mii, around a virtual world, interacting with others and living a cute little digital life. Similar to, say, The Sims, your Mii can even get married to another Mii — but unlike The Sims, marriage in Tomodachi Life unlocks additional content. There’s just one problem: If your Mii wants to marry a Mii of the same sex, you won’t be allowed to do it.

Tye Marini, a 23-year-old Nintendo fan who also happens to be gay, launched the Miiquality campaign in April. To spread the word, he explained in a video, “I want to be able to marry my real-life fiancé’s Mii, but I can’t do that. My only options are to marry some female Mii, to change the gender of either my Mii or my fiancé’s Mii, or to completely avoid marriage altogether and miss out on the exclusive content that comes with it.” And he’s right: That sucks. A lot. As Marini said to Kotaku in an email, “Because the game has such a huge focus on relationships, this is a problem for many LGBTQ gamers.” He began the Miiquality movement in the hopes that the issue would at least be acknowledged by Nintendo, if not totally resolved.

Said Nintendo of America Inc. in a statement to the Associated Press, "The ability for same-sex relationships to occur in the game was not part of the original game that launched in Japan, and that game is made up of the same code that was used to localize it for other regions outside of Japan," Nintendo noted in an emailed statement.” While it’s true that gay marriage is illegal in the entirety of Japan, that’s not the case for everywhere else they’ve localized the game; furthermore, it’s not unheard of for games to be tweaked to suit different markets. Although it’s not a Nintendo game, consider South Park: The Stick of Truth: It faced a whole lot of censorship in its international releases because, well, South Park. If games can be changed to censor things for certain locations, I have a hard time believing that they absolutely can’t be changed in a way that functions as a sort of “uncensorship.” Or something. That's a word I just made up, but you get what I mean.

Nintendo defends themselves by saying its refusal to put the ability for Miis of the same sex to get married in the game isn’t “social commentary,” but that doesn’t really soften the blow. “Nintendo never intended to make any form of social commentary with the launch of Tomodachi Life,” the company said in a statement. “The relationship options in the game represent a playful alternate world rather than a real-life simulation. We hope that all of our fans will see that Tomodachi Life was intended to be a whimsical and quirky game, and that we were absolutely not trying to provide social commentary.” But, as The Mary Sue points out, if the game is intended to be “whimsical and quirky,” why not allow Miis of the same sex to get married? If the naysayers came down on that side of things, writes Susana Polo, “then they could just say that anyone trying to take the game’s same-sex marriage features as a serious statement on a prominent social issue is reading too much into it.”

And let’s not forget the bigger picture, either. Over at Salon, Mary Elizabeth Williams writes that recognizing the fact that gay people exist definitely isn’t “social commentary."

Note to Nintendo. When we straight people engage in our daily activities of being heterosexual, are we making a social commentary? When we form relationships with members of the opposite sex, are we being political? When we exercise our legal right to marry, are we doing something controversial? Nope? Guess what — it’s actually exactly the same for gay people.”

She goes on to note that same-sex unions are recognized in 17 states, that same-sex relationships happen in all 50, and that neither fact is “political” or “commentary.” Furthermore, while marriage quality hasn’t made it to Japan yet, it’s probably safe to say that homosexuality has. The fact that Nintendo is dismissing a huge portion of their demographic with a “hey, lighten up!” isn’t going anyone any favors — not the company, not the gamers… no one.

Tye Marini, for his part, isn’t calling for a boycott of Nintendo or Tomodachi Life; instead, he’s urging supporters to write to Nintendo, asking them to include same-sex relationships in an update or future installment. How’s that for remaining positive in the face of adversity?