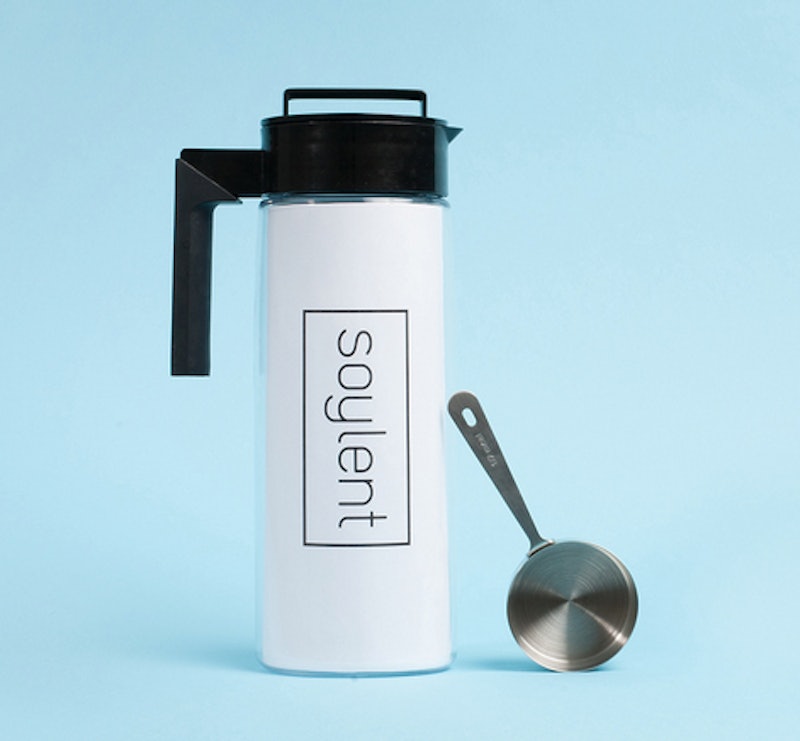 After reading the first couple paragraphs of a piece in The New Yorker titled “The End of Food” about Soylent, a new powdered drink intended to replace food entirely, I had to check the post’s publish date to make sure it wasn’t a product of April Fool’s Day. How could a chalky, yellowish goo replace food? FOOD?!

Soylent, the food (not meal) replacement in question, is the brainchild of Rob Rhinehart, a 24-year-old software engineer. When he was running low on funds, he realized something: food was eating up a lot of of his time and money. And so, Soylent, the beige-y, milkshake-like, taco-replacing substance, was born. Can you see why I thought this was a humor piece?

On his Soylent-focused blog, titled "How I Stopped Eating Food: Mostly Harmless," he backs up his reasoning for such a bold creation:

I hypothesized that the body doesn't need food itself, merely the chemicals and elements it contains. So, I resolved to embark on an experiment. What if I consumed only the raw ingredients the body uses for energy? Would I be healthier or do we need all the other stuff that's in traditional food? If it does work, what would it feel like to have a perfectly balanced diet? I just want to be in good health and spend as little time and money on food as possible.

After a lot of research, self-testing, and tweaking, Soylent — named after the 1973 Sci-Fi flick, Soylent Green — was born. The formula is made up of Maltodextrin, rice protein, oat flour, canola oil, fish oil, and a laundry list of necessary vitamins and minerals.

Rhineheart himself has been on a diet of this stuff for over a year now. The creepy part: he doesn’t miss food. In an interview with Vice, he defends his food-free lifestyle:

Not having to worry about food is fantastic. No groceries or dishes, no deciding what to eat, no endless conversations weighing the relative merits of gluten-free, keto, paleo, or vegan. Power and water bills are lower. I save hours a day and hundreds of dollars a month. I feel liberated from a crushing amount of repetitive drudgery. Soylent might also be good for people having trouble managing their weight. I find it very easy to lose and gain precise amounts of weight by varying the proportions in my drink.

You know, he kind of has a point. As someone who has eaten a little too much Ramen, Subway, and canned Progresso soup (oh god, college), Soylent would have been pretty convenient — not to mention cheap (less than $10 a day!).

Unlike other meal replacements, like Ensure, smoothies, or protein shakes, Soylent is designed to replace food entirely — though, you can still eat food if you want to. In his blog, Rhinehart defends his product to critics like myself, who enjoy eating (so most of us):

I like beer, but I usually drink water. I love walking through the city, but I usually take the bus. I love conversation, but I still send a lot of emails. I find separating utility from leisure increases my enjoyment of both. Personally, I enjoy food, there are just many things I enjoy more. I get far more enjoyment out of a Stephen Pinker book or a jazz band than a fancy dinner. I'd rather build a ham radio or learn a new programming language than plan a meal. Asking me to cook is like asking a chef to program. It's not for everybody, but I respect their passion and skill. I want cooking to be a hobby and a profession, like photography, not a necessity. Now I have the freedom to spend more time on the things I want to do. When I do want a nice meal I'll happily pay someone to cook who is actually good at it.

So, maybe, just maybe I could get into this. Speaking strictly from a food-lover's perspective, the thought of trading out bodega sandwiches with Soylent would be fine with me (as long as I can mix a little raw cacao with it). As long as I can still eat tacos...

If you're interested in trying Soylent, or even creating your own version of the drink, visit Soylent.me.