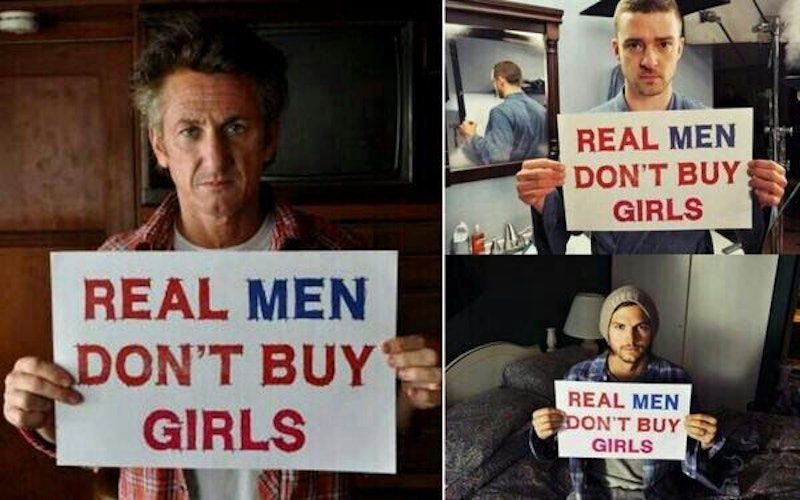 In the wake of Boko Haram's horrific kidnapping of nearly 300 schoolgirls in Nigeria, several campaigns have launched around the hashtag #BringBackOurGirls, and now a male-oriented hashtag is here. In the last few days, Twitter users have been posting pictures of celebrities like Justin Timberlake, Sean Penn, and Ashton Kutcher holding signs that read "Real Men Don't Buy Girls." Now, the hashtag #RealMenDontBuyGirls is trending in the U.S., Nigeria, the UK, and elsewhere. One important point: Those celebrities had nothing to do with this new initiative. The pictures were actually taken in 2011 for a different campaign, against human trafficking, and they've being repurposed for the new cause.

In 2011, Ashton Kutcher and then-wife Demi Moore started the Real Men Don't Buy campaign to raise awareness of child sex slavery in the U.S. The campaign also featured a series of YouTube videos featuring the same celebrities who are now in tweets in support of the Nigerian schoolgirls.

The first instance of the #RealMenDontBuyGirls hashtag being used in the context of the Nigerian kidnapping was when a New Jersey woman tweeted the three-year-old hashtag alongside the current #BringBackOurGirls hashtag. Buoyed by the star power, the #RealMen hashtag was catapulted back into the Twittersphere.

This recycling of an old hashtag to support a new cause reflects the importance of social media's role in political and global activism. It also signifies how passionately the international community feels about the events occurring in Nigeria. On Thursday, a "Social Media March" is scheduled to take place in support of rescuing the Nigerian schoolgirls. The event's Facebook page states: "For 200 minutes this Thursday, use Twitter, Facebook, BBM, Instagram, Whatsapp and whatever else is out there to create an awareness and help BRING BACK OUR GIRLS."Another group that chimed in to align themselves with #RealMen's message was the Saudi Arabia-based Islamic Fiqh Academy, which is dedicated to the advanced study of Islam. A representative told the Associated Press that this "crime and other crimes committed by the likes of these extremist organizations contradicts all humanitarian principles and moral values and violates the provisions of the Quran and Sunnah."