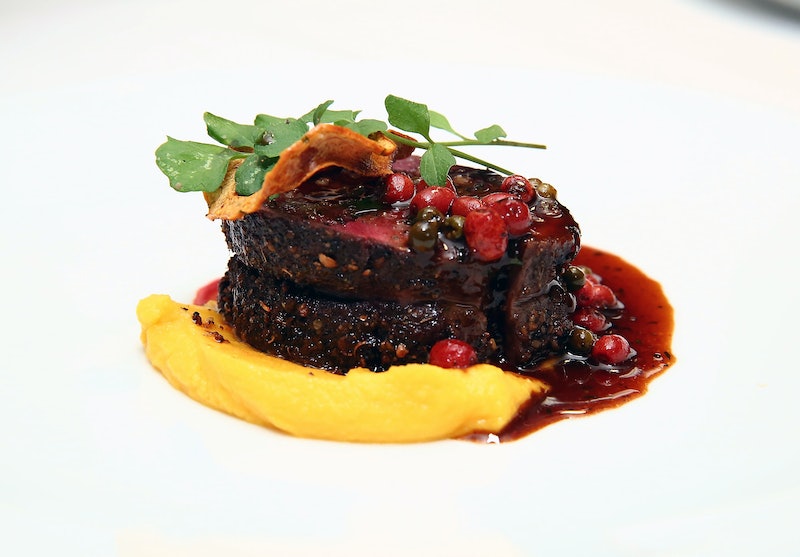 I don't know about you, but the last time I was craving a steak I didn't think, "Gosh, I sure wish I could go to a female -friendly restaurant to get one." I kind of just wanted an awesome steak, maybe with some rosemary shallot fries on the side. But, apparently, the hot new trend is (you guessed it!) woman-friendly restaurants! And yes, they’re a little sexist (some more than others).

Let me elaborate. Exhibit one: STK — you may have heard of their in-your-face-I’m-a-woman-eating-steak ad campaign. Famous for it's "sexy" atmosphere, mauve lighting, and the bold tagline, “Not Your Daddy’s Steakhouse,” (sounds like Victoria’s Secret!), STK was one of the first to jump on the female-focused steakhouse bandwagon, according to Eater. There’s also SHe, Eva Longoria’s restaurant. According to The Week, the restaurant caters to women with tiny portions, a catwalk, and mirrors in the menus so the patrons can reapply their lipstick. As much as I love the actress/philanthropist/former Desperate Housewife, I think the concept went a little too far (then again, I'm not that girly).

So who exactly thought steak + women = business? Are women intimidated by the typical steakhouses or something? What's wrong with just going to The Capital Grille? According to The Week, it has a little bit to do with female empowerment, and a lot to do with marketing. The Week mentions that women make 85 percent of purchases, and control $15 trillion of consumer and business spending. Eater also notes that women are the “decision-makers” when it comes to eating out, and that restaurants like SHe and STK want to convince women that steak places aren’t just for “men” anymore (we think that?).

Marketing-expert Kelly Skoloda tells Eater that yes, focusing on smaller portions, a friendly atmosphere, and nutrition are good ideas for these businesses, but there's more too it. She explains that not forcing advertising on women would be a wise idea. I can definitely get behind great advertising, decor, and food that doesn't scream "hey ladies, pleeeease come eat steak here, it'll be super sexy" but then again, isn't that what happens at just a normal both-sex-focused restaurant?

I'm curious to see what the future holds for this trend, and if others like it will start popping up. We already have cat cafés... what's next? Restaurants targeting people with beards?